Citroen's C3 supermini has always focused on comfort and value, along with an extra dash of the kind of innovation we expect from this enduring French brand. Here, we're going to look at the facelifted version of the second generation model, which sold between 2013 and 2016. It featured more efficient engines than the original post-2009 version of this design, a clever range of three cylinder 'Pure Tech' units that transformed its petrol proposition, plus a clutch of Airdream micro hybrid diesel models that'll cost just pennies to run. The result still isn't sporty but as before, the ride's great, the interior's smart and the boot's practical.

Citroen knows a thing or two about small family cars, especially those with a dash or two of character. Here, after all, is the marque that over sixty years ago, brought us the iconic 2CV, a model which established its maker as an innovator, an embracer of technology and a brand in tune with the fickle finger of fashion. Over the years, we've seen further moments of shining innovation, design bravery and unadulterated quirkiness, but never really amongst Citroen superminis. The Nineties Saxo was a rebadged Peugeot 106, while its first generation C3 successor was flimsy and forgettable. In the second generation C3 though, a car launched in 2009, we got a very different proposition. It wasn't a current-day 2CV but it was about as innovative as a practically-sized five-door modern supermini from this era was ever going to get. And therefore a proper Citroen. Here, we focus on the lightly revised sleeker-looking version of this MK2 model we first saw in the Spring of 2013, a car that like its pre-facelifted predecessor, shared its engines and underpinnings with similarly-sized Peugeot models. Which is important to know as it explains why this facelift really transformed this car. In the Spring of 2012, Peugeot had introduced their all-new 208 supermini, completely with a high-tech range of 1.0 and 1.2-litre three cylinder petrol engines. This improved C3 got all the same technology, which meant that at last, it had a credible petrol-engined line-up. Previously, you had to stretch to a pricey HDi diesel if you wanted a really efficient version of this car. Like its predecessor, this model was rather refreshing in its refusal to prioritise the 'sportiness' that other brands from this era seemed to feel was necessary in their small runabouts. The French maker had its more dynamic three-door DS3 line to provide that. Which left this five-door C3 to create its own distinct, more laid-back market niche as something smartly fashionable that offered higher quality and greater comfort than a Fiesta, without the potential priceyness of a Polo. The facelifted MK2 model C3 sold from 2013 to 2016 before being replaced by an all-new third generation design.

What You Getword count: 885

The looks of this second generation C3 design were certainly improved by this car's mid-life facelift, an update that brought a bolder front end emphasised by a prominent double chevron grille. Owners of the original post-2009 second generation version of this car may also notice that the enhanced model sports trendy LED daytime running lights and a body-coloured splitter in the lower air intake. At the rear, the facelift brought sleeker tail lights and some neat reflectors fitted to the bumper. So much for the detail stuff. Interestingly, this C3 is almost identical in size to the supermini sales leader from this era, Ford's Fiesta. But from there the similarities cease. Ford went for angular window lines and a dynamic drive. Citroen, in contrast, has always preferred to target buyers who favour a more laid back life. Not only in terms of this car's softer ride but also in styling that prioritises an airier, more spacious-feeling more comfortable cabin. That's why this C3 featured a short, steeply-rising bonnet, an arcing roofline and side windows that fell lower than the bonnet line. Most notably, the large frontal glass area on top models featured something that was really quite unique - the so-called 'Panoramic Zenith windscreen'. Find a C3 fitted with this feature, then push up the driver's seat sunvisor and your normal upward 28-degree angle of vision will be increased to a massive 108-degrees - a better view out in fact than you'd get roof-down in a convertible where the windscreen rail is usually directly above your head. Practically, it means you don't have to crane your neck up when, for example, you're first in the queue at the traffic lights. Subjectively, it does wonders in increasing the light, airy feeling of the cabin. The extended glass section is progressively tinted so that the top of your head won't be but if you really don't like it, you can pull the sunvisor back down again to the point where the top of the roof would normally be. This feature gives the car a welcome feeling of spaciousness that isn't borne out by the tape measure. In fact, at well under 4m, it's one of the shortest superminis you can buy from this era. Quite impressive then, that this C3 still manages to offer up quite adequate interior space. Or at least the feeling of adequate interior space. Some of this is smoke and mirrors - the light, airy atmosphere created by the bulbous roof and low windowline for example. And some of it's created by selective prioritisation, so for example, you get a recessed lower dash that gives the front passenger a lot of knee-room - but at the expense of a tiny glovebox. So much for the design semantics. What you can't argue about is the quality of this car's cabin in comparison to the tackiness of the small Citroen models we all grew up with - though we don't really understand why in a car as resolutely un-sporting as this one, there's a flat-bottomed steering wheel. Still, at least the model in which such a thing would be more appropriate - the French brand's more up-market DS3 hot hatch - provided this car with many elements of its interior trim. So there are classy analogue instruments - with smart white-backlit dials - plus solid expensive-looking plastics, flashes of chrome to liven things up and a neat strip across the dashboard that was available in a selection of colours. Everything flows together - nothing looks like an afterthought. In fact, so solid does it all feel and so few are the kind of giveaway rattles that often plagued the post-2002-era first generation C3 model that it's something of a surprise to learn that this second generation C3 design is 50kg lighter than the original one. Take a seat at the back and as usual with a car in this class, there's space for two adults or three children to sit comfortably. Knee room is slightly below average but aided by the slim design of the front seatbacks, plus the semi-raised position of those front seats creates decent space under them for your feet. It's also notable that, thanks to the domed roof, headroom is a little better than you would expect. If you happen to be sitting behind the front seat passenger, you're likely to have more legroom as the recessed dash we mentioned earlier will enable that front seat occupant to sit further forward. Out back, and rather astonishingly given the tight exterior dimensions, you'll find one of the largest luggage bays in the supermini segment from this era, though there's quite a high loading lip to negotiate before you can access it. At 300-litres in size, it's 10% bigger than a comparable Fiesta's boot and offers nearly as much room as you'd find in a Ford Focus from this era from the next class up. Certainly there's enough capacity here to take a single bulky suitcase or a pushchair. There's also some extra space under the floor to neatly store away the parcel shelf when not in use. For ultimate carriage capacity, you can of course push forward the split-folding rear bench that's standard on all models and although it doesn't go quite flat, it does fold to reveal 1,121-litres of fresh air. 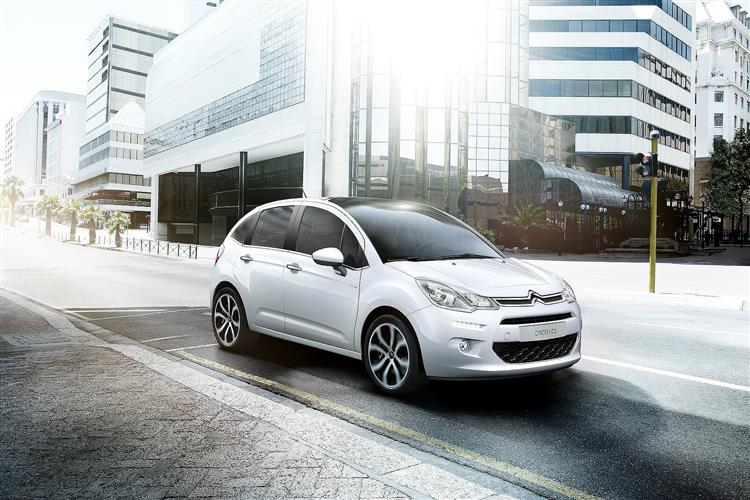