You know what you're getting with Toyota's sixth generation Hilux pick-up: something that'll take whatever you can throw at it. Introduced in 2005, it was then gradually improved right up to the point where a substantially facelifted model was introduced in 2012. Here, we look at the early 2005 to 2012 model range as a potential used buying proposition.

If you want a vehicle that's tough and pretty unstoppable for work as well as private use, then it's hard to think of a better place to start your search than with Toyota's sixth generation Hilux pickup. This is, after all, the vehicle Jeremy Clarkson and Top Gear drowned, threw from the top of a tower block and still drove home. It was also the one they chose for a round trip to the North Pole. It is, in short, a pick-up trusted the world over to get the job done. The Hilux is Toyota's second most successful model of all time - but it's never ruled the UK pick-up market, something the brand tried to put right with the sixth generation model it introduced in 2005. With unsurpassed off road ability, practical loading capacities and a car-like interior, it offered a very competitive package for its time, let down initially only by a feeble 101bhp 2.5-litre D-4D diesel engine. In the 2005 to 2012 period, Toyota's engineers worked on this unit to make its output more competitive, increasing its power first to 118bhp, then to 142bhp. In 2012, a heavily facelifted version of his MK6 model was introduced.

What You Getword count: 301

With the increase in sales of pick-ups to buyers who use them as a lifestyle accessory, looks have become a more significant factor with modern pick-ups. This one needs a bit of dressing up before it's ready to assume any real kind of High Street cred but the lines are certainly determined and purposeful. As with most pick-ups, there's the choice of either single or doublecab models, plus a compromise 'Extra cab' option offering two rear seats for occasional use. Since nearly 70% of UK buyers choose the Double Cab, that's the variant we're focusing on here, offering a standard of rear seat room that Toyota claims is as much as you'd find in an upper-medium class car. Plus points include the way the rear bench can flip up to offer extra storage space, keeping things like tools away from prying eyes. It's unfortunate though that the centre rear seat passenger doesn't get a full three-point seatbelt. At the wheel, this generation Hilux moved from truck to SUV in both look and feel, something that's especially evident if you're able to opt for the flagship Invincible version, though a height-adjustable driver's seat is a notable omission. There's plenty of storage space though, with a lockable glovebox and a deep storage container between the front seats. As for storage where it matters - in the loading bay - there's one cubic metre in the Double Cab model, a figure that rises to 1.2m3 in the Extra Cab version and 1.5m3 in the Single Cab variant. In the Double Cab, there's 1547mm of loadspace length and 1100mm between the wheel arches. There's 450mm of loading height and those with bad backs will need to note the need to lump heavy items 850mm up in the air to meet the required load floor height. 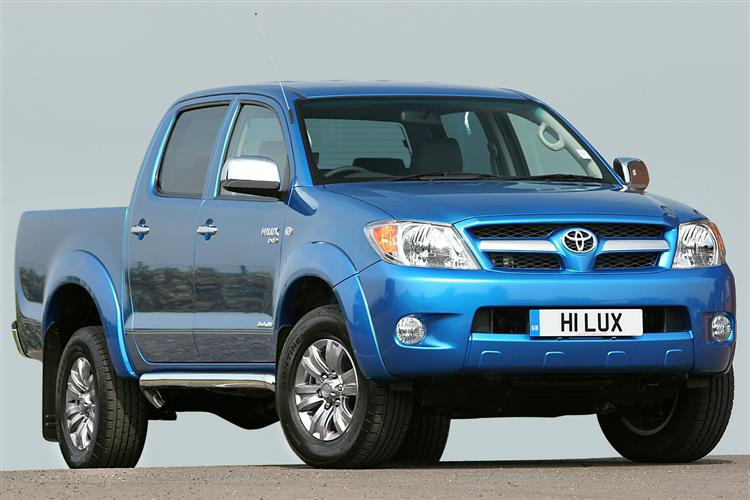