You know what you're getting with Toyota's sixth generation Hilux pick-up: something that'll take whatever you can throw at it. In 2012, this MK6 model was smartened up and given more efficient Euro5-compatible engines. But don't worry: it proved to be as tough as ever.

If you want a vehicle that's tough and pretty unstoppable for work as well as private use, then it's hard to think of a better place to start your search than with Toyota's Hilux pickup. This is, after all, the vehicle Jeremy Clarkson and Top Gear drowned, threw from the top of a tower block and still drove home. It was the first vehicle to be driven to both North and South Poles. It is, in short, for everyone from suburban builders to Libyan freedom fighters, a pick-up trusted the world over to get the job done. It's been hugely successful for Toyota across six generations dating all the way back to 1972, well over 12 million sales worldwide across 164 different countries making it the brand's second most successful model of all time. But the Hilux has never ruled the UK pick-up market, something the brand aimed to put right when the sixth generation version was launched here back in 2005. Early versions of this model were handicapped by feebly-powered engines but after the MK6 model's original launch, the Japanese maker upped the ante under the bonnet. And, at the end of 2011, the brand smartened up the packaging a little to help this pick-up compete with a revised version of its closest rival Nissan's Navara, as well as with all-new pick-ups from Ford, Mazda and Volkswagen. Of course, the changes to this revised model were more than skin-deep. That sleeker front end concealed a far more competitive range of Euro5-compatible diesel engines claiming class-leading CO2 emissions. Add these (and a dash of hi-tech equipment) to the Hilux's established virtues - unsurpassed off road ability, practical loading capacities and a car-like interior - and the result, it was claimed, would be a package that'd be tough to beat. This model sold until a new seventh generation Hilux design was launched in 2016.

What You Getword count: 416

With the increase in sales of pick-ups to buyers who use them as a lifestyle accessory, looks have become a more significant factor with modern vehicles of this kind. This one used to need a bit of dressing up before it was ready to assume any real kind of High Street cred but thanks to a package of aesthetic changes that saw a comprehensive re-style from the A-pillar forwards, the facelifted post-2012 sixth generation Hilux model was able to stand out a little more. The bonnet, radiator grille, headlamps and bumper all got re-styled in an attempt to create a little more overtaking presence. As with most pick-ups, there's the choice of either single or doublecab models, plus a compromise 'Extra cab' option offering two rear seats for occasional use. Since nearly 70% of UK buyers choose the Double Cab, that's the variant we're focusing on here, offering a standard of rear seat room that Toyota claims is as much as you'd find in an upper-medium class car. We're not sure about that, but we do like the way that the rear bench can flip up to offer extra storage space, keeping valuable things like tools away from prying eyes. It's unfortunate though, that the centre rear seat passenger doesn't get a full three-point seatbelt. At the wheel, this generation Hilux moved from truck to SUV in both look and feel, especially so in flagship 'Invincible' form. That perception was helped in this revised model by a smarter upper dashboard design and horizontal instrument cluster, the latter tweak necessary to incorporate the clever 'Toyota Touch' multimedia unit with its 6.1-inch touchscreen. It's a nice touch, but we would have preferred to see Toyota attach a greater priority to getting the driving position right. As it is, the lack of height-adjustment for the driver's seat and reach-adjustment for the steering wheel remind you that this remains a commercial vehicle at heart. Any LCV demands plenty of cabin storage space - which this Toyota provides, with a large lockable glovebox, a couple of deep cubbies in the dash and a deep storage container between the front seats. There are also decently-sized bins in each of the front doors and enough cupholders to deal with the largest thirst: you'll find one in each of the front doors, plus two that pop-out from the facia. Enough space then, to swallow the coins, passes, tools and all the other stuff that tends to accumulate in the cab of a working vehicle. 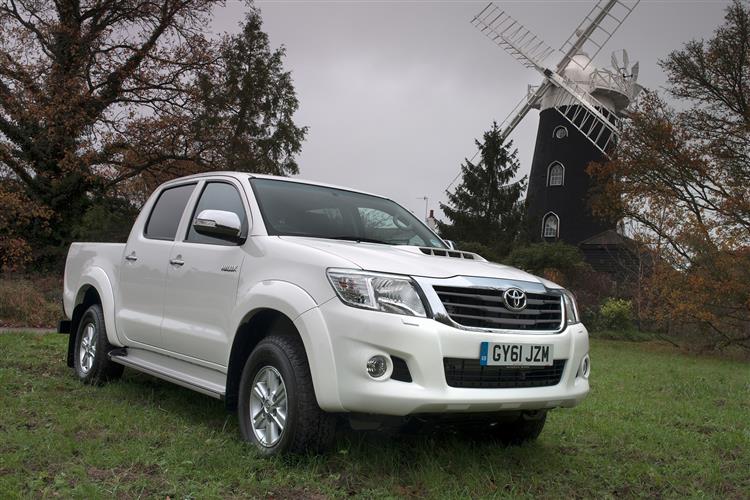