Toyota couldn't afford for their third generation Yaris to be an also-ran in the supermini segment. So in 2014, they fundamentally revised it, with smarter looks, extra equipment and much greater refinement and efficiency. The idea was to broaden this model's appeal, seek a younger audience and convince buyers that when it comes to comfort, quality and a little bit of spirit in this sector, the Yaris could fit the bill. Let's check this car out as a used buy.

These days, a supermini must be more than sensible, practical, well-built and efficient. Buyers now take those sorts of things for granted and look instead for fashion, flair, innovation and technology. Back in 2014, Toyota hoped they'd be looking for something like this, the much improved version of their third generation Yaris. The original version of this model launched in 2011 was a good car, but there simply weren't enough reasons to buy mainstream versions when rivals offered more striking looks, more engaging design and a more dynamic driving experience. That was a problem, given this Yaris' importance in accounting for over a quarter of all the company's total European sales. Toyota, the first Japanese brand to produce a supermini specifically designed for European buyers, had allowed itself to lose sight of what those buyers really wanted. So heads rolled, tables were thumped and full responsibility for immediate remedial action taken away from Japan and passed to the maker's Product Development team in Brussels and Design Studio near Nice. The resulting facelift took an almost unprecedented level of effort, with over £70 million invested, around 1,000 new parts re-engineered and 576,000 man hours spent in developing this updated model, launched in the Summer of 2014. The resulting sharper-looking MK3 design claimed to offer everything the trendiest small car seeker could want, from Google mapping to hybrid power. At the same time, aware that traditional older buyers might not want to Facebook their friends on the way to eat designer sushi, Toyota also prioritised their needs in making this car feel plusher, quieter and better built. Some things didn't change of course. This remained one of the largest, most practical choices buyers of the time could make in the supermini segment and a range of engine updates also made it one of the more efficient options too. This car sold until the Spring of 2017, when it was replaced by another facelifted model featuring a new 1.5-litre engine.

What You Getword count: 924

Though it's a long time since the Yaris has been seen as in any way youthful and extrovert, creating that kind of feel was the objective with the 2014 facelift of this third generation design. Hip without being hip replacement? Perhaps that's a little cruel, but you get the idea. With this update, the styling influence clearly came from the second generation Aygo citycar, with the X-shaped frontal graphic giving this supermini a far sharper and assertive look. Europeans like that. The headlights featured projector technology for high and low beams, while the clusters incorporated the option of LED daytime running lights. The lower grille was emphasised by a so-called 'floating' spoiler and aimed to draw attention to the more ground-hugging stance. In profile, owners of the earlier MK3 Yaris model might notice some of the detail changes made to this one, like door mirrors with an optional folding function and updated 15 and 16-inch alloy wheel designs. The door belt moulding was revised too, there to emphasise the high, sharp waistline that better defines the angular body. At the back, this revised model featured a smarter rear bumper and diffuser assembly which gave the rear end a more self-confident look, garnished with a neat set of LED light clusters that on plusher models, offer up their own distinct night time lighting signature. So yes, the tinsel's quite tempting. What's important though, is that it clothes a supermini design that remained one of the largest and most practical in its segment, with over 65% of the car's length devoted to the cabin. There certainly aren't many more spacious cars in this segment when it comes to rear seat passenger space. True, you can't comfortably carry three adults for any real distance, but that's an unreasonable expectation in a car of this size. What's more important is that with kneeroom improved by the thin seatbacks, a couple of six footers are pretty well catered for - and of course, three children will be fine. When we tested the original version of this third generation design, one of our slight disappointments was that the previous MK2 model's useful sliding rear bench hadn't been carried forward. But then that feature was mainly there to disguise the fact that the MK2 Yaris wasn't blessed with a very big boot. At its original launch, this MK3 car put that right, improving upon its predecessor's trunk size by over 25%, practicality that of course was replicated on this facelifted version, with 286-litres of luggage room on offer when you load to the windowline - or 347-litres if you load to the roof. Push forward the 60:40 split-folding rear seats and you'll find that they don't quite fold flat to the floor but nevertheless, a useful 768-litres of total space is freed up. And at the wheel? Well, it's all a lot plusher and more interesting than was the case with earlier Yaris models. Well, a lot more interesting than the original version of this MK3 model was anyway. Prior to that car's introduction, all Yaris' used to have a centrally mounted instrument binnacle which had the advantage of creating something of a talking point, a feature then ditched when customer clinics told Toyota they didn't like it. That meant uniqueness with this third generation design had to come down to less innovative touches like the colour-co-ordination possible in some models whereby the smart, soft-touch strip running the length of the fascia could be colour-matched in bright 'Piri Piri red' against door panels and front seat upholstery inserts. Adding that kind of package to a Yaris really didn't suit the character of the car and most original customers decided that it was better to simply go with trim quietly underlining the inviting nature of the cabin. The cheap glossy look that characterised early versions of this MK3 design was with this facelifted version replaced by classy grained textures, while the previous bright chrome trim made way for a more sophisticated satin finish. There were also smarter, more interesting seat trims and soft-touch materials were more prevalent, especially on the redesigned door panels. Plus raising the centre console made it possible to fit a shorter gear lever for snickity-snick changes. Perhaps the most important cabin change with this revised model lay with the upgraded infotainment set-up on offer, the 'Toyota Touch 2' system. This larger, higher-resolution 7-inch colour screen works effectively, though it's a display that's still very difficult to read on a sunny day. Buyers could though, have it in 'MirrorLink'-ready form, which allowed connection of smartphones via standard Bluetooth connectivity and operation entirely by using the touchscreen. Toyota folk familiar with the brand's multimedia systems will find a comprehensive screen menu and a screen operable with the kind of 'drag-and-flick' use you'll be familiar with from your phone. The system incorporates a rear view camera, can send or receive text messages and some original buyers upgraded it to the 'Touch 2 with Go' status that includes full map navigation. All these things apart, the interior wasn't changed much compared to the previous version of this car. Which meant that build quality from the French Pas-de-Calais factory was as strong as ever. And that the controls proved to be sensibly positioned and extremely easy to get to grips with. There's also plenty of interior storage space, though some of the ledges provided tend to deposit their contents onto you once you corner with any speed. The door bins are useful though, able to accommodate a decent sized drinks bottle with ease. 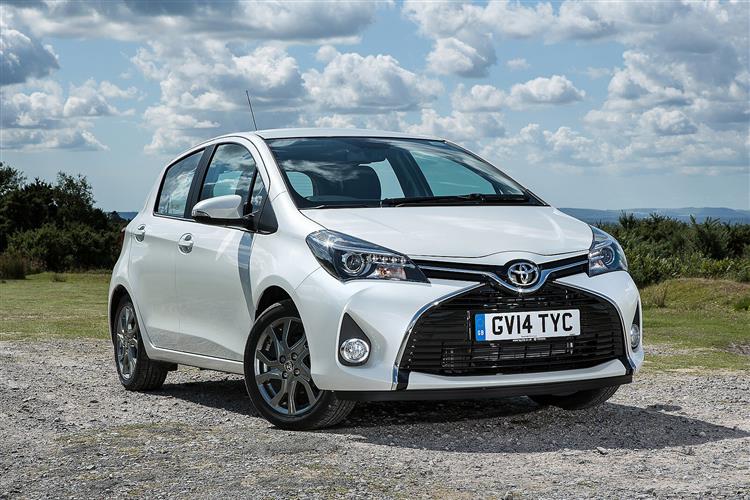