BETTER BY DESIGN (some text hidden)

It wasn't so long ago that the very notion of a budget-priced family hatchback that could offer you all the quality of a VW Golf or a Ford Focus was fixed firmly in the realms of fantasy. That such a car should come from Kia would have been almost as baffling only a few years ago. Well, that car's here, it's called the cee'd and you can find out here why it makes one of the smartest used buys in the family hatch sector, especially in the facelifted guise introduced in 2009.

It might not look it but this is a landmark car. True, before this Kia cee'd was first launched in 2007, we'd had budget-priced Korean models. None though, that properly took on the European and Japanese market leaders on their own terms, especially in the volume Focus and Golf-dominated Family Hatchback sector. This car changed all of that. Styled by an ex-Audi designer, it was built in the heart of Europe and targeted at the heart of the European motor industry, shaming the established players by matching their quality while massively undercutting their prices. And just in case people weren't sure about buying into such an unusually ambitious brand, the Koreans also threw in an astonishingly long 7-year warranty. It all caused quite a stir. Of course, it wasn't perfect. To begin with, Kia went a bit too far in its attempts to match the roadgoing composure of the class-leaders and the result was a rather over-firm ride. This was fixed for the improved version we're looking at here, launched at the end of 2009 and also featuring revised styling, eco-tweaks and a fresh 1.6-litre diesel engine. Like its predecessor, it wasn't quite as bullet-proof as a Golf or quite as dynamic to drive as a Ford Focus but it was close enough for the differences not to matter to most buyers. That comforting warranty and affordable price structure remained though, as did the unusual cee'd name, a combination of the French abbreviation for European Community (CE) and this car's project name (ED). This model lasted through to 2012 when it was replaced by an all-new car.

What You Getword count: 286

I'm not sure that ex-Audi designer Peter Schreyer's sleeker front grille and trendy LED tail lights really make this car stand out any more than it did before but fortunately, this was already a good looking family hatchback, albeit one that played it safe in terms of its overall look. Inside, the interior that looked quite smart at the cee'd's original launch back in 2007 needed an update by 2009, so there's a smarter steering wheel and a revised centre console with better quality stereo and ventilation controls. Some of the plastics remain a little harder or shinier than you'd find in, say, a Golf, but overall, it's a commendable effort. What you can't argue with is the amount of space on offer. As with most family hatches, three adults across the back seats is a bit of a squash on longer journeys but there's very comfortable space for two, with ample head and legroom. Out back, there's one of the larger boots in the class at 340-litres, which you can extend to 1300-litres with both sections of the 60:40 split rear bench folded down. If that's not enough, the SW estate model offers between 534 and 1664-litres. As standard, cee'd buyers got remote central locking, an MP3 compatible CD stereo with steering wheel-mounted controls, electric front windows, air-conditioning and a trip computer. Safety-wise, you'll find rear ISOfix child seat points, active anti-whiplash head restraints and airbags of the front, side and curtain varieties. Unfortunately, Kia's Vehicle Stability Management system (to help you out on slippery surfaces or if you enter a corner too fast) was limited only to the plushest models. There was an automatic gearbox option available with the 1.6-litre petrol and diesel engines. 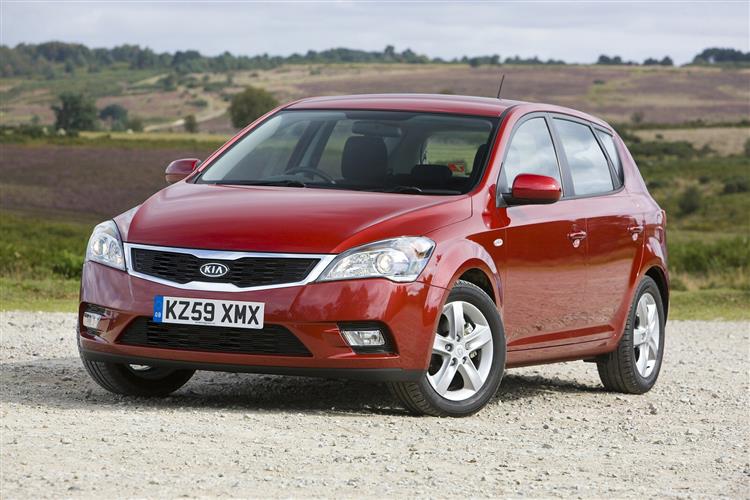