Want a large SUV that can walk the walk as well as talking the talk? What about one you probably aren't familiar with, SsangYong's Rexton? The second generation version of this model was launched in 2006, then continually updated by the Korean maker. In 2015, towards the very end of this design's production life, the brand installed a lustier 2.2-litre e-XDi220 diesel engine beneath the bonnet and it's this last-of-the-line MK2 model that we look at here as a used buy.

Increasingly, large luxury SUVs are all about image, all about badge-equity, all about fashion. Or at least most of them are. Here's one that's more practically grounded - SsangYong's Rexton. Of all this South Korean brand's products, the Rexton is probably the one provoking most familiarity amongst UK buyers. That's because it's been around so long - since 2001 in fact, sold in first generation form until 2006 when a second generation version offered much the same kind of solid, practical proposition - and much the same aging 2.7-litre Mercedes diesel engine. A big step forward though, was made in 2013 with the launch of the 'Rexton W', the end letter a designation for this revised model's worldwide remit. That sales challenge was much aided by the installation of a properly modern 2.0-litre e-XDi diesel engine that was fully Euro5-compliant. It was a package that reawakened customer interest in this car and created a sales momentum that SsangYong hoped would continue when in 2015, they further improved this large SUV with the installation beneath the bonnet of a cleaner, more powerful Euro6-compatible 2.2-litre e-XDi220 diesel. This could be optionally paired to a smoother 7-speed Mercedes-sourced E-Tronic automatic gearbox. The resulting model, merely badged 'Rexton', also featured an updated interior, smarter looks and added extra equipment. In the Autumn of 2017, it was replaced by an all-new third generation Rexton model. What You Pay

What You Getword count: 272

SsangYong says it designed this Rexton around the principle of 'practical elegance'. Did they achieve that? Well if you fit into the target demographic, you might well think so. You don't get the sophisticated avant garde looks you'd find with a premium-badged German rival, but then that's not the kind of SUV that this car is trying to be. Instead, the shape speaks of tough but very nicely finished seven-seat sensibility - and manages to do so using design language smarter than maybe you'd expect from a budget brand. So far, so good. And behind the wheel? Well a proper off roader should have a properly commanding driving position - and this one does: this is certainly old-school SUV motoring. But then in some ways that's rather refreshing. And in the second row? Well for the kind of money SsangYong is asking, you might expect the kind of slightly cramped family packaging you'd find in, say, a Qashqai-sized family Crossover model. Instead, what you get is a car that, thanks to a wheelbase some 30mm longer than a Toyota Land Cruiser costing nearly twice as much, offers decent space for two or three folk, even though the seats themselves don't slide or recline. That long wheelbase means there's room for third row seating too. And boot space? This five-seat model gives you the kind of capacity that all Rexton owners will be more likely to be using on a regular basis - about 475-litres. Fold the second seating row and a very reasonable 1,338-litres of space is opened up - around 35% more room than you'll get with a rival Toyota LandCruiser. 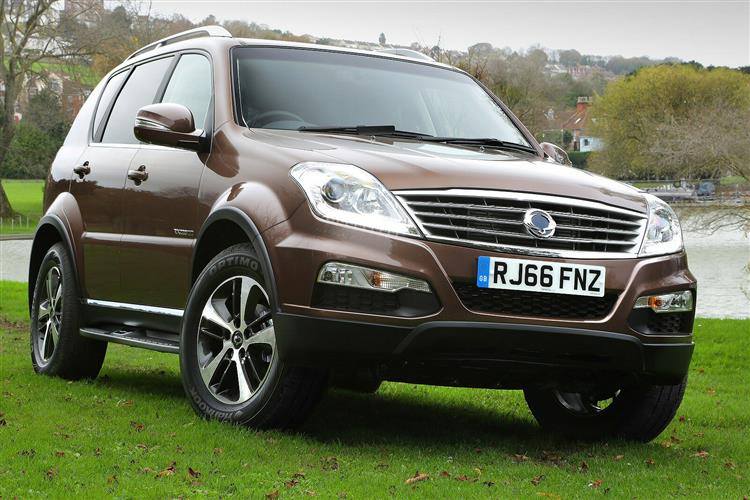