Striving for perfection saw Rolls Royce in 2007 create the world's ultimate convertible, this Phantom Drophead Coupe. If you have the means, it's an unashamed indulgence - and a highly impressive one.

Rolls Royce has a rich and elegant history of producing rather unique and very expensive luxury convertibles. They've been very impressive cars, but until the turn of the century, never great ones. People bought them for the name, the presence and the wood and leather open-topped Britishness they offered. One of BMW's first decisions when taking ownership of this famous brand in 1998 was to decree that to be no longer good enough, the 2003 Phantom saloon underlining that intent in a clinically delivered display of excellence. A year later, the company unveiled the 100EX, a drophead convertible version which circled the world's motorshows gathering comment and hopeful deposits from plutocratic owners desperate to see it in production. In 2007, their dreams were realised and the Phantom Drophead Coupe was born. As any Rolls Royce should be more than just a car, this one must be more than simply a luxury convertible: for more than a quarter of a million pounds, buyers from new expected no less. Cutting edge technology was incorporated but that isn't what makes this model stand out. This isn't a machine inspired by other rivals, nor is it simply a convertible version of the Phantom saloon. Instead, its design team immersed themselves in yachts and stately homes, classic design and timeless elegance. And brought us this. Work of art or flawed masterpiece? If you have the means to afford a used example of this car, you'll enjoy finding out.

What You Getword count: 593

This car's creators claimed it to be a less formal interpretation of classic Rolls-Royce design than its four-door stablemate and when you inspect the design, it's easy to see what they meant. Pretty much nothing but the engine is shared with the Phantom saloon, with every exterior panel new as part of carefully considered proportions more suited to the shorter body. We say 'shorter' but that's relative. At 5.6-metres long, this at launch was the largest convertible yet made, 200mm longer even than Bentley's enormous Azure. Still, it's proportions are perfect - and actually quite sporty. Look closely and you'll note that the more rakishly set back front grille is more streamlined than other Rolls Royces of the period, with slim front LED side lights sitting above larger round driving lamps. Further uniqueness is guaranteed if you find a car that was originally specified with the optional brushed steel bonnet intended to reference classic Phantom models of the '20s and '30s. Equally unusual is the optional teak rear deck that gives your car a look reminiscent of a luxury Italian Riva speedboat. There's also the 'picnic boot', the very essence of automotive affability. Though at 315-litres, the trunk is only just about as big as it needs to be to swallow the regulation three sets of golf clubs, its real party piece is its split tailgate, strong enough to provide comfortable seating for two owners to enjoy a couple of well-earned glasses of champagne. Shunning the trend prevalent in the early Noughties for folding metal tops not suited to elegant looks or picnic boots, Rolls brought us with this car the largest fabric convertible top yet made, five-layered, acoustically-tuned and cashmere-lined to fit like a bespoke suit as it electrically folds behind the cockpit in around 25 seconds. It's near perfectly sealed against wind noise but its design can, when erect, make the back seat a somewhat claustrophobic place to sit. Nor is the space around curved rear lounge seats quite as palatial as you might expect the world's biggest open-top to provide. Still, at least they're easy to get in - and out of thanks to the huge rear-hinged coach doors. Slipping behind the wheel requires a big step over the wide sills and is something you feel awkward about doing in anything other than a tailored-made suit so carefully chosen is the wood, leather, chrome and brushed steel. But once you're there, the excellence is awe-inspiring. Over 350 man hours is invested in every car, with each using 18 hides for its 450 separate pieces of leather. Each of the 60 pieces of veneer is 40 layers thick, glued onto aluminium and finished by hand, part of over 2400 slivers of timber used in every car. Rolls Royce's woodshop team would have spent up to a month preparing, matching, shaping and finishing each car's set. And the quality of the design matches the care expended in creating it. The facia hides many of its buttons and controls, plus the colour LCD screen used for satellite navigation and other custom settings, behind exquisitely crafted wood panelling. Indeed if you wish, you can drive the car and control everything from the 15-speaker stereo to the multi-zone climate control without opening any of it. A drawer in the centre glides out to reveal your telephone keypad, while a slide-out door houses the BMW iDrive-derived Rotary Controller that marshalls all the main functions. Traditional touches like the heavily chromed spherical air vents are welcome sights, as are the old-fashioned organ stop levers that operate them. 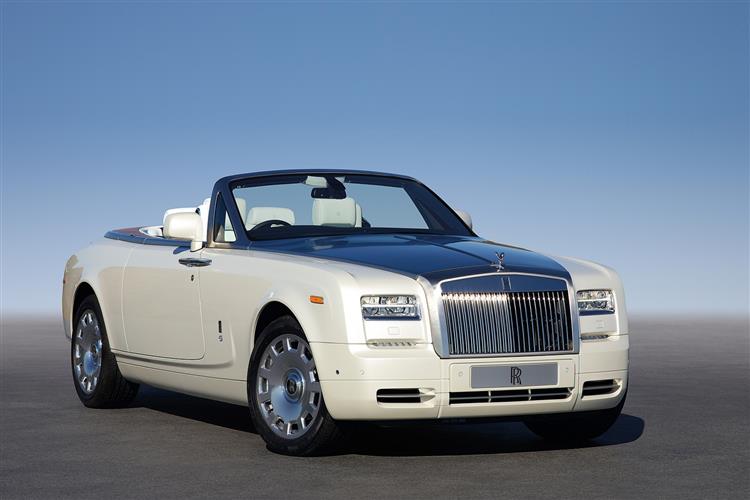