SIMPLY THE BEST (some text hidden)

The seventh generation Rolls-Royce Phantom was the car that back in 2003 re-launched its brand under BMW ownership in inimitable style. It's a super-luxury saloon that still commands the road like no other car on Earth. Massive in every respect and full of cutting-edge technology, it combines British craftsmanship with BMW engineering know-how.

Engineer Charles Stewart Rolls and car dealer Henry Royce joined forces back in 1904 with the aim of producing the very best automobiles in the world. Film stars, statesmen and dignitaries the world over testify that they still do. These people care little that today, the company is no longer British-owned, nor do its products now hail from the traditional Pyms Lane factory in Crewe. Excellence is all that matters and since the turn of the century, this classic brand has begun afresh in a new quest to achieve it, the first design of its new era launched in 2003 - this seventh generation Phantom saloon. It remained British-built, fashioned in a state-of-the-art manufacturing plant in Goodwood, though with bodywork fabricated and engines provided by BMW. And as expected, blended advanced technology and traditional hand-craftsmanship - with extraordinary results. As a used car, this model still represents the world's ultimate automotive status symbol amongst luxury cars from its era. A long wheelbase 'EWB' body shape was introduced as an option in 2015. The MK VII Phantom It sold until the eighth generation Phantom model was launched in late 2017.

What You Getword count: 541

Nobody could accuse this Rolls Royce of looking ordinary and, if you like to keep a low profile, then you'd be better off plumping for something more discreet like a Maybach. The MK VII Phantom was designed and modelled in London - at a converted bank opposite Hyde Park that used to be Johnny Depp's UK apartment - and still creates visual shockwaves years after it was first unveiled. Apparently the design team worked out that a car's height should be twice that of its wheels and the resulting proportions are enormous. But it works, thanks to a fuss-free profile and a nose that blends classic Rolls-Royce tradition with controversial aspects like the way the headlamps are integrated. Open the driver's door and you're greeted with one of the finest car interiors in history. Build quality is of course exemplary with cutting edge technology, but there's none of the confusing gadgetry found in, say, a BMW 7-Series from this era. In a Phantom, any controls not needed for everyday driving are kept out of sight until required. The doors are helped to fasten shut by silent hydraulic motors that seal you from the outside world. It's an oasis of calm inside, with every possible luxury at your disposal. In fact it's such a glorious place to reside that you'll be tempted to move in - something you have every right to expect after spending the kind of money that might otherwise go a long way towards securing you a nice riverside apartment. The sumptuous interior is crafted from the finest leather and timbers available. The switches for the power windows and audio system are beautifully crafted 'violin keys', while the chrome air vents are operated by traditional 'organ stops'. At least 15 hand-stitched hides go into the 450 individual leather parts that cover the various surfaces and each of the 43 different wooden sections are made up from up to 28 individual layers. This is luxury on an altogether different level and everything looks just so touchable you can't help but run your fingers over every tactile surface. Hinged at the back rather than the front, the rear coach doors allow back seat passengers to enter and exit gracefully and can be closed at the press of a button. Once inside, original buyers had a choice of specifying either individual chairs separated by a centre console or a rear 'lounge seat' which features curved outer edges, making it easy to turn and face a fellow passenger. Either way, the base is elevated by 18mm for a peerless view ahead and situated behind the rear C-pillar for safety as well as privacy from aspiring paparazzi. Legroom is ample - and of course even better if you can afford to pay the premium for the 'EWB' extended wheelbase version with its extra 250mm of rear compartment length. This enables the provision of things like a partition wall for privacy, drinks cabinets in the rear doors, rear window curtains or even a safe in the 460-litre boot. This model really is huge - indeed you could fit a new Fiat 500 between its front and rear wheels with room to spare. But then, at this end of the luxury car market, size definitely matters. 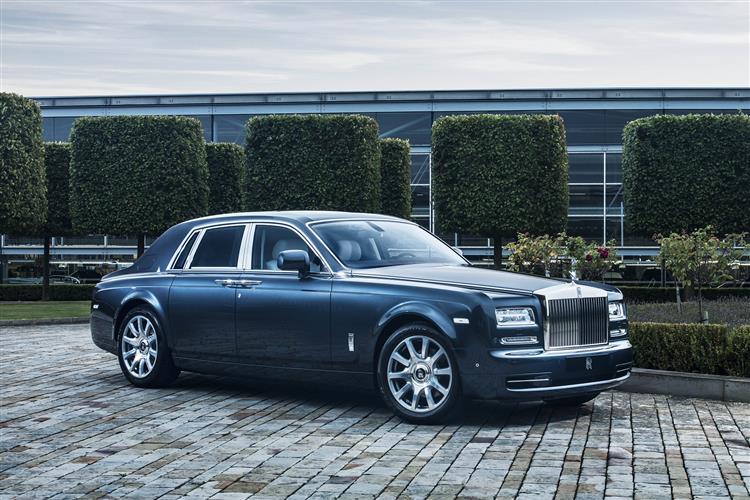