EVER TRIED SORENTO? (some text hidden)

This vastly improved third generation version of Kia's Sorento proved to be efficient, smart and more spacious for families seeking practical, seven-seat all-wheel drive transport. More interesting than an MPV and roomier than a CR-V or RAV4-style soft roader, you can see why it might appeal as a used buy in the SUV D segment.

Let's say you want a decently sized SUV for family duties. A compact RAV4-style soft roader is too small. A bigger full-sized Discovery or Land Cruiser-class model too large and expensive. No, potentially what you want is something like this, Kia's third generation Sorento. This car, along with its Hyundai Santa Fe cousin, has long offered this kind of appealing compromise for family SUV buyers in search of spacious, affordable seven-seat versatility. Traditionally, its buying proposition has always been that for not much more than RAV4 or CR-V money, you could get three rows of seats, extra capability and better value for money. Job done. Except that it wasn't. Even in its more polished second generation guise, the Sorento felt a touch utilitarian. And for longer journeys, the truth was that it could only really seat seven if the last two members of your party were of junior school age. In developing the MK3 version then, Kia's clear objectives were to make this car a little larger, as well as making it a little more up-market. If it could do that without dramatically affecting this model's biggest selling point, its value pricing proposition, then opportunities for sales growth looked certain. That's exactly what this third generation Sorento design claimed to deliver. A model launched in the Spring of 2015 that was supposed to provide nearly everything you'd get from a large-segment European-badged SUV rival costing over 50% more. And a car that marked a further stage forward in Kia's intended transformation from value brand to premium quality car maker. Hence the fresh technology, the extra efficiency and the greater depth of engineering, refinement and quality. The MK3 model sold in its original form until early 2018, when it was then replaced by an updated model featuring updated safety technology, a revised trim structure and a new 8-speed auto gearbox. It's the original pre-facelift version of this third generation design though, that we look at here.

What You Getword count: 512

When a car maker describes the design of its vehicle as 'Dignity wrapped up in a solid package', you've a pretty good idea what to expect from the model in question. Kia may aspire to be seen as a premium brand but when it came to creating the third generation version of this Sorento SUV, it didn't want to produce the kind of sporty, lower-slung, more dynamic-looking large SUV that posh European makers like to offer. There's a reason for that of course and it lies in the fact that over half of this model's sales volume comes from American and Asian markets that like their big 4x4s to be bluff, practical and boxy. So that's what was delivered with this MK3 Sorento model. Or to a point it has anyway. Aware that European folk prefer something a little more arresting, Kia's design studios in Korea, Frankfurt and California collaborated to try and deliver the necessarily squarical shape with more of a sleeker, swept-back profile. The object here was not only extra showroom presence but a need to disguise what was probably this MK3 model's biggest change - its greater size. This, we were promised in 2015, was something that nearly all its direct competitors struggle to be: a proper seven-seater - as opposed to merely being a five-seat SUV with a couple of fold-out seats for kids in the boot. Shall we take a seat at the wheel? That's what designers from European premium brands will be doing, keen to see just how much Kia is now capable of in this, its flagship model. Behind the wheel, the previously quite utilitarian cabin of the previous second generation model was replaced by something much smarter, with a wraparound dash that extends into the doors and offers slick, soft-touch surfaces, lovely satin brightwork, glossy piano black trim and controls with clear, classy graphics. Go for a plusher model and you're even promised one of those trendy TFT virtual displays to replace the conventional instrument dials. Take a seat in the second row and there's also a greater feeling of space, partly because of an extra 15mm of legroom but mainly because the designers managed to all-but-eliminate the previous model's chunky transmission tunnel, meaning that three passengers can easily be seated. Access to this third row would be better if the middle seat tumbled forward rather than merely sliding back and forth. Once you're in though, there is, as the 80mm wheelbase increase promises, just about room for the couple of full-sized adults who were significantly more cramped in the previous generation version of this car. Of course, with the rearmost seats in place, there's isn't much room for luggage - but then of course that's true of any seven-seater that isn't directly based on a van. Lift the tailgate and you'll find that with all three rows in place, you get 142-litres of cargo space, a capacity that rises to 605-litres if you tug on the provided boot levers to fold the third row chairs, that last figure a 17.5% increase on before. 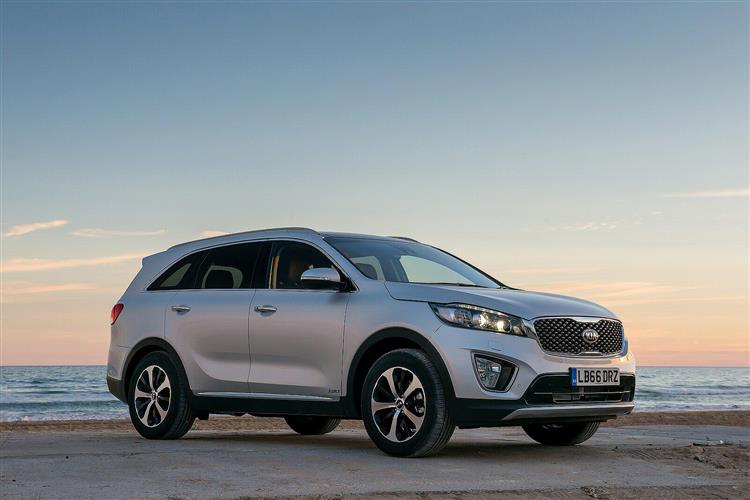