Between 2014 and 2018, Subaru sold its Impreza 1.6i RC model to bring four wheel drive traction within the affordable reach of family buyers who neither wanted or needed any kind of SUV. It's a conventional Focus-sized family hatch with very unconventional underpinnings, the Symmetrical AWD system paired to a uniquely-configured 1.6-litre petrol Boxer engine. Not a package likely to suit everyone but perfect perhaps for those in search of something that's just that little bit different in this segment.

Let's imagine this: your home's up an unmade track and every year during the colder months, your little family hatchback struggles up it. Sometimes though, it doesn't and you have to abandon the thing at the bottom and walk. With the kids. And the shopping. The obvious answer is to get one of those small SUVs with four-wheel drive, but you haven't done that because you've found that one of those will be very expensive, both to buy and to run. Clunky to drive too - and rather over-the-top for what you actually need. Perhaps what you actually need is something like this - a Subaru Impreza 1.6i RC - a car sold between 2014 and 2018. As you can see from the picture, this isn't an SUV. It's not even one of those trendy Crossover models you see so often these days, cars that seem to promise 4WD capability but usually don't deliver it. No, for someone in the situation we've just described, this is instead a means of affordable family transport that delivers everything you need - and nothing you don't. It's the only sensibly-priced C-segment model that delivers its power to all four wheels yet, on paper at least, there seem to be few compromises to make for that kind of all-weather capability. It's not overly expensive, it's tough and durable and, provided you're happy with a five-door hatchback bodystyle, it's just as practical as that comparably-sized ordinary 2WD Focus, Astra or Golf you might have been thinking about. True, there's no diesel engine option and the single 1.6-litre petrol unit you do get doesn't trouble the class front runners in terms of fuel consumption or cleanliness. Still, the running costs are affordable and you get a lot of extra standard features that you'd have to pay more money for if you went for the kind of cars we just mentioned. So, does it all add up as a used buy? That's what we're here to find out.

The look of this fourth generation Impreza model will be familiar to those who know their Subarus. In profile, where a solid line runs along the length of the car parallel to the windows, you pick up some of the changes the designers made to try and make this car more spacious inside. The A-pillars were moved 200mm closer to the front for this era of design, which allowed for a sleeker, more aerodynamic shape, emphasised by the subtle wheelarch blisters. Then there are the particularly short front and rear overhangs which Subaru says helped them add 25mm to the wheelbase. Moving back, the more distinctive C-pillar plays its part in what the brand hopes is a purposeful lean-forward stance. Moving up-front, we mentioned earlier that the A-pillars were moved forward with this generation design. That, along with a higher hip point, makes it easier to get in and out of the car, especially for older folk. Once inside, that same front pillar change gives you a wider field of vision that's further aided by a 60mm lowering of the windowline. Look around you and the emphasis is firmly on durability rather than fashionable design. There's little to surprise and delight here, but you get the feeling it'll probably out-last you. 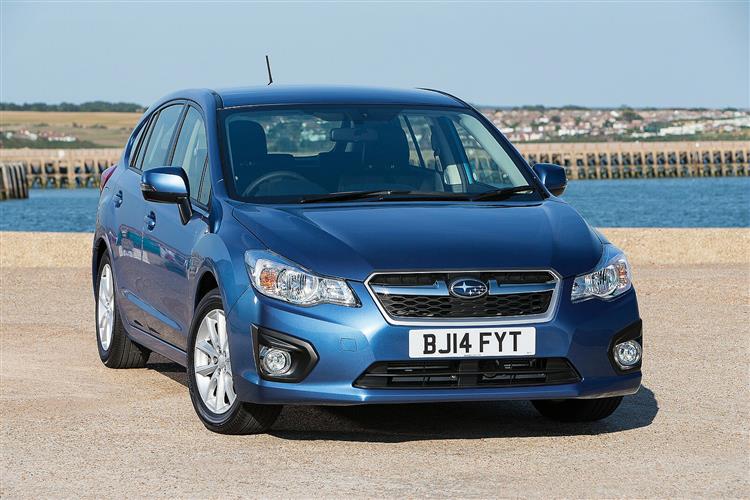