Third time round, BMW's modern era MINI turned out to be a much more sophisticated thing. This three-door Hatch version is slightly more practical than its R56-series predecessor and feels considerably better built. It's far more efficient too, with the bulk of the range using a punchier range of eager three cylinder engines. And its more sophisticated underpinnings are better suited to longer journeys. In short, this car came of age in third generation form. But does it make sense as a used buy?

'The MINI is a way of life. A friend. It holds a special place in our hearts'. We're quoting from BMW, who of course are makers of the modern era model, but the words could have come from Alec Issigonis, designer of the 1959 original. That car was never fundamentally changed in nearly half a century of production. This one, in contrast, reached its third generation quite quickly - in 2014 - and was first launched in the three-door Hatch F56 form we're going to look at here. The MK3 MINI offered us a fresh chapter in a modern era success story. By the time of its introduction, over 2.4 million first and second generation versions of what we could call the 'Ger-MINI' had rolled out of the British Oxford factory gates since the day that this car was originally re-launched by BMW in 2001, before being thoroughly updated again in 2006 second generation modern form. These two initial BMW-funded designs proved just how much people were prepared to pay for a small, cute runabout with quality, style and its own cheeky brand of class. Inevitably, they also prompted a whole host of imitators, most with this three-door Hatch version firmly in their sights. Whether you're talking city scoots like the Fiat 500 or the Toyota iQ, smart superminis like the Citroen DS3 and the Alfa MiTo or even trendy small Crossovers like the Nissan Juke or Kia Soul, all claimed inspiration from this car and targeted much the same fashion-conscious customers. People now wanting a bit more than simply trendy design and a bit of fun behind the wheel. By 2014, they were also people wanting a little more luxury, from a car more comfortable in venturing further afield. Driving efficiency and interior space also figured a little higher up customer wish lists than had been the case with previous generation MINI Hatch models. All of which, in developing the MK3 F56 model, left BMW needing to turn a fresh page in the colourful history of this iconic car. You might think that it looks much the same as the previous R56 version but in fact, almost everything was changed for the F56 - the platform, the engines, the technology: all was re-invented. Impressively, the MINI makers managed to achieve all this while still retaining most of the same effervescent MINI character. A five-door F55 version of this design was launched in 2015 and both body styles sold steadily until MINI announced a light mid-term facelift in the Spring of 2018. It's the earlier pre-facelift three-door F56 Hatch model that we look at here as a used buy. 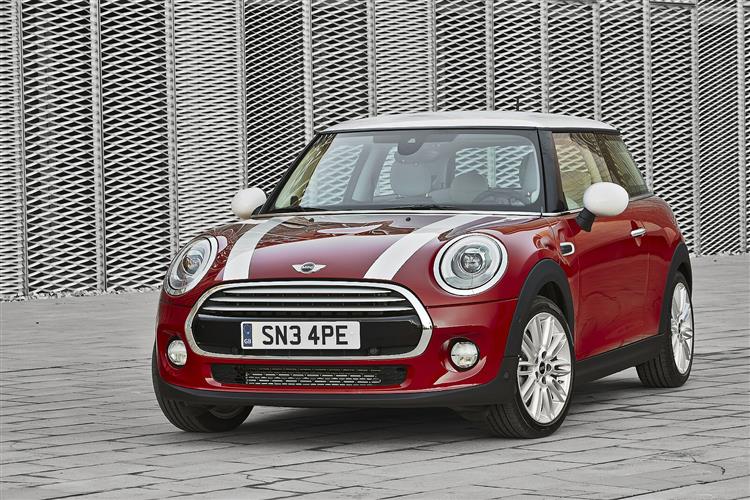