Back in 2013, with the improved fourth generation version of its large luxury saloon, the LS, Lexus looked to showcase all it could be. Buyers got a choice of either conventional or hybrid petrol V8 power and could opt for either standard or sharpened driving experiences. What didn't change was that luxury, refinement and sheer attention to detail still got top billing. Let's check this model out as a used buy.

The Lexus LS. Back in 1989, the launch of the original version of this model redefined what a luxury saloon should be, the engineers behind it tasked to create nothing less than 'the best luxury car in the world'. Few would argue that they succeeded. It seems rather ridiculous now to remember that back then, the European makers who ruled the flagship four-door market sector defined luxury as being as much about wood and leather as it was about ride and refinement. Thanks to this Japanese brand, cars of this kind were finally transformed from boardroom barges to the technological showcases buyers had a right to expect from their inflated price tags. By 2013, the LS was still a technological showcase, but it wasn't the obvious segment choice that it had been for a brief period in the early Nineties until the European opposition caught up. Lexus' response was the revised fourth generation version we're going to look at here as a used buy, a car featuring over 3,000 detail changes, among them three world-firsts and fifteen Lexus-first features and technical innovations. Perhaps most significantly for UK buyers, this improved car re-introduced conventional V8 petrol power to the line-up in the form of an LS460 model that the vast majority of potential buyers wanted, especially in its driver-focused F Sport guise. Of course, if you've a chauffeur, your priorities will lie elsewhere, possibly in the back seat of the top LS600h petrol/electric hybrid flagship model. Both variants are a rare sight on British roads. But that all adds to the appeal of what is an unusual but very interesting choice in the used large luxury saloon segment from the 2013-2018 era. This MK4 LS was replaced by an all-new MK5 hybrid-only model in early 2018.

What You Getword count: 808

It took four generations and over a quarter of a century of development for Lexus to come up with an LS offering what its German rivals boasted all along: its own visual identity. This improved MK4 model further developed the brand's L-Finesse design language with a more muscular bonnet design below which was added Lexus' distinctive spindle-shaped upper and lower front grille layout. Look closer and the detailing is quite beautiful, with an array of no fewer than 12 LEDs used for the turn indicators, with further LEDs used in integral daytime running lights created from a single seamless light tube that leaves a distinctive L-shaped visual signature. In profile, this improved MK4 LS shares its predecessor's long, elegant cabin proportions, while at the rear, the spindle design seen at the front is reflected in flowing lines that cut across the boot surface from the C-pillars, before flaring out towards the lower half of the body. It's a shape that was one of the slipperiest in the sector in its era (with a 0.26Cd drag factor), yet features incisive strokes from the stylist's pen with paper-thin panel gaps that have become a brand trademark: this, you feel, could only be a Lexus. An impression further emphasised behind the wheel where the instrument layout has a very comfortable and ergonomically efficient horizontal layout. But your first impressions will simply be of over-riding luxury and beautifully chosen furnishment. The cabins of rival competitors are very nicely done but they don't ultimately feel very different from those of smaller executive models in the next class down. An LS, in contrast, always makes you feel like you're in a very expensive car indeed. We love the precision-machined aluminium analogue clock with GPS time-correction, positioned to perfectly catch the light. The bright Optitron instrument dials that spring into life as you fire up are positioned either side of a 5.8-inch TFT multi-information screen. And the wonderfully tactile three-spoke leather trimmed electrically adjustable steering wheel raises automatically to aid entry and exit as the beautifully supportive electric leather seat adjusts its position to suit. The wood veneer trim is beautifully done, created from a painstaking layering and cutting process that takes 38 days to complete. You'll find it on a dashboard divided into upper and lower zones, the higher one dominated by a huge central 12.3-inch LCD multimedia screen, the widest on the market in this period, and the interface through which you control audio, 'phone, vehicle information, climate and navigation functions via the key component you'll find in the dashboard's lower operating zone, the 'Remote Touch Interface'. Why can't they just call it a 'mouse'? That's after all what it is, a little device that feels a tad clunky to use at first but soon becomes second nature as you flick through the various menus. And in the back? Well in the short wheelbase LS460, there's no more room in the rear than the original version of this fourth generation LS could offer since though the body length of this improved model increased by 30mm, the wheelbase of this car remained exactly the same. Still, with well over 5m of overall vehicle length, this remained a very large car indeed, quite big enough to provide plenty of space for a couple of adults to stretch out, with room for three if you really must. For those fortunate enough to be able to stretch up to the long wheelbase-only LS600h variant of course, there's space in abundance, though only two ottoman-style electrically adjustable seats, with all of the extra 120mm of vehicle length dedicated to making the rear seat experience an exquisite one. This is aided by an especially nice feature, the 'Climate Concierge'. It uses 13 temperature sensors to decide upon the climate necessary in each zone of the car, then 20 individual air outlets to distribute a hot or cold breeze as necessary. This climate controlled air will incorporate what are called nanoe particles, minute little negatively charged ions wrapped in water molecules that clean the cabin air, deodorise the upholstery and can even moisturise your skin and hair. And bootspace? Well that was a major problem for the LS when the MK4 model was originally launched in the UK in 2010. In the 2010 to 2013 period, the only LS variant you could buy here was the hybrid 600h. Even with the prodigious long wheelbase length of this derivative, the cargo bay was tiny - just 330-litres - less than you'd get in a VW Golf. It had to be improved and it was in the improved post-2013 LS range where the 600h variant's boot was increased in size to 420-litres. But that'll just apply to a handful of Chief Executive types. It's more pertinent to consider the luggage capacity of the standard short wheelbase LS460 - quite sufficient at 560-litres. 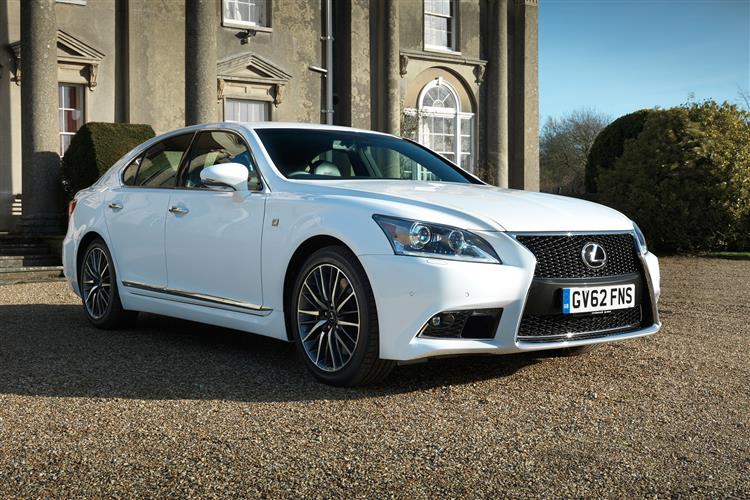