MUST IT BE A MUSSO? (some text hidden)

The Musso pick-up model that SsangYong sold between 2016 and early 2018 aimed to redefine the value proposition for customers in the pick-up segment and provide them with rugged but car-like transport. Better to drive and more affordable than most of its competitors, yet better equipped, this Musso features a five-seater Double Cab design that's as practical as you'd want. If you're buying a used pick-up from this era in this sector, you probably won't have been considering one. Perhaps you should.

If you know anything about SsangYong pick-up models - or perhaps you own one - you may recognise this 2016 to 2018-era Musso for what it is - a revised version of the vehicle that the Korean brand sold here badged as the 'Korando Sports' between 2012 and 2016. SsangYong changed the name in 2016 because it wanted to differentiate this utility truck from its Korando SUV passenger car. The other more important thing that changed with this model's introduction in 2016 was the diesel engine beneath the bonnet, previously a 2.0-litre unit, but as part of the name change alterations, updated to 2.2-litres in size so that more pulling power could be provided, something SsangYong somehow managed at the same time as delivering a significant improvement in CO2 emissions. It was certainly a world away from the ancient old 2.9-litre Mercedes-derived diesel that was fitted to the previous SsangYong Musso pick-up we saw in this country, the ugly-looking Ken Greenly-designed model that was produced between 2002 and 2005. The brand promoted this Musso model in much the same fashion as it marketed its 'Korando Sports' predecessor. It was, buyers were told, not only a commercial carrier but could also function as a passenger car with pick-up versatility, thanks to the kind of supple multi-link rear suspension that most other pick-ups from this era couldn't offer. Yet there's all the rugged workmanlike ability you'd really want from a model in this class, thanks to a 1-tonne payload and a 3-tonne towing capacity. This Musso sold until mid-2018, when it was replaced by a Rexton-based model of the same name.

What You Getword count: 357

It was clear at the launch of this model in 2016 that SsangYong design had come a long way since the last generation Musso pick-up was quietly deleted from the company's product line-up back in 2005. The awkwardly, ungainly styling of that old Ken Greenly-penned model shared nothing with the more confident, sophisticated shape on offer here. It was a subtle development of what was served up by the Korando Sports pick-up that sold between 2012 and 2016, the vehicle this more modern Musso directly replaced. If you happen to be familiar with that Korando Sports model, the most obvious aesthetic improvement you'll notice here lies with the front foglamps, embellished with jewel-like LEDs. And inside? Well SsangYong needed to do a little work here. The driving experience of the old Korando Sports pick-up may have been quite car-like but the interior ambience of that model really wasn't. Hence what was delivered here, a more pleasingly-finished cabin with plenty of smart silver trimming, especially around the more stylish four-spoke leather-trimmed steering wheel. Take a seat in the rear and you'll find that this Musso holds an important advantage over some of its most direct rivals. Not only is there plenty of room for head, shoulders, knees and feet but, rather uniquely, you can recline the rear seat back by up to 29-degrees. SsangYong's car-like claims for this Musso model might to some be suggestive of some compromise in commercial practicality. That's not the case when it comes to size. A large, flat rear deck provides a 2.04m2 load area complete with a standard load deck liner and anchor points so that you can easily tie things down. And can those items be really heavy? They couldn't be with the original 'Korando Sports' version of this design, but that model was later uprated to be able to take the one-tonne payload that customers in this segment tend to be looking for. As you'd expect, that capability was carried forward into the Musso range. Get a model whose original owner specified the optional tow bar and you'll be able to tow a braked trailer of up to 3-tonnes too. 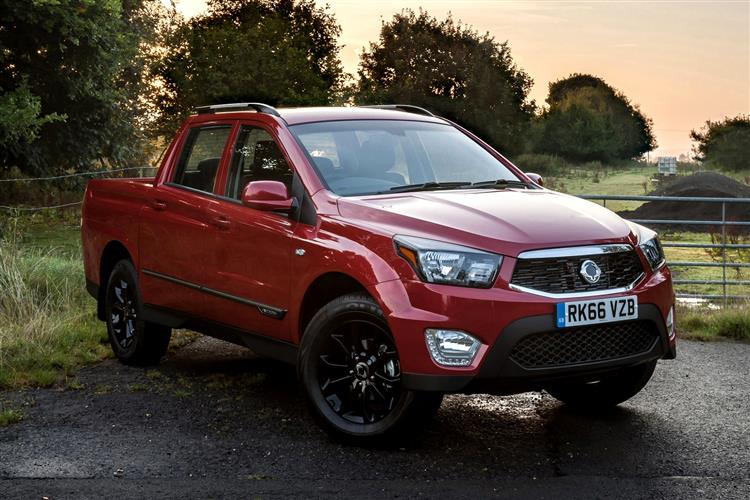