At its launch in our market in 2012, Dacia's Duster was easily the most affordable SUV you could buy. But, a few years down the line, how does this Romanian-built Renault-engineered product stack up as a used buy in first generation form? Let's find out.

Old-era Dacias were Renault models built under licence. Modern ones have unique Dacia design with Renault running gear under the skin and the Duster used that formula in targeting the growing market for Qashqai-like Crossovers designs and Freelander-style compact SUVs. Depending on the rival you had in mind, it was typically between 25% and 50% cheaper when new. The MK1 design was announced in 2009, but didn't make it to the UK until 2012. In 2016, a 1.2-litre TCe turbo petrol engine was introduced and at the same time, a top level of 'Prestige' trim was added to the range. In the same period, the original 105hp 1.6-litre petrol engine was replaced by a slightly more modern 115hp SCe unit. This MK1 model sold until early 2018, when it was replaced by a new MK2 Duster.

What You Getword count: 486

As much as the price, the shape helped to sell this Duster. It's not typically compact-SUV generic, with a glasshouse shallower than that of some rivals, a kicked-up rear window line and a wheelbase that appears longer than it is. The result gives this Dacia a clear look of its own. and the purposeful amount of fresh air in the wheel arches suggests that even the two-wheel drive version might well have a good go at tackling anything the British countryside can chuck at it. Draw up in one of these and is anyone really going to think that you've paid as little as half of the normal asking figure for a car of this kind? We don't think so. Things are nothing like as modern under the skin of course, but the underpinnings aren't too ancient, shared with designs as recent as Nissan's trendy Juke. They've also been strengthened to suit this Duster's possibly more arduous role in life. As have the interior fittings. At least that would probably be Dacia's explanation for the lack of soft-touch plastics and trendy interior design, but we suppose you could make a case for such a utilitarian finish being preferable if this car really is to serve as the go-anywhere, do-anything family workhorse. It all fits perfectly with the pared back utility feel of the car. At the wheel, you sit in front of a basic two-dial instrument binnacle with orange LCD bar graphs for temperature and fuel level. On seats that are very comfortable and offer decent all-round vision limited only by the upswept rear windows and thick pillars. Of course, if you look for them, there are signs of cost-cutting. The electric window and mirror controls of early cars were sited on the centre console for example (it made it easier and cheaper to produce the car for separate left and right hand drive markets). The stereo on such early cars was a separately-fitting after-market-style affair. And on all MK1 Dusters, the steering wheel adjusts only for height, not for reach. In certain places, the economies went a little too far: the bare paint on the load lip for example, which quickly became gouged and scratched, something that a cheap plastic trim panel would have avoided. The boot's a decent size, offering 475-litres in the 2WD model, much bigger than the 416-litre litres you'd get in a rival Skoda Yeti from this era. Bear in mind though that with this Dacia, that figure that falls to 408-litres if you go for a 4x4 model, courtesy of this variant's proper full-sized spare wheel. Drop down the rear bench (which split-folds only on plusher models) and you can increase that figure to 1,636-litres. As for rear seat accommodation, well, there's actually more space than you'd find in most compact SUVs, with reasonable levels of head, leg and shoulder room for two and, on shorter journeys, even for three. 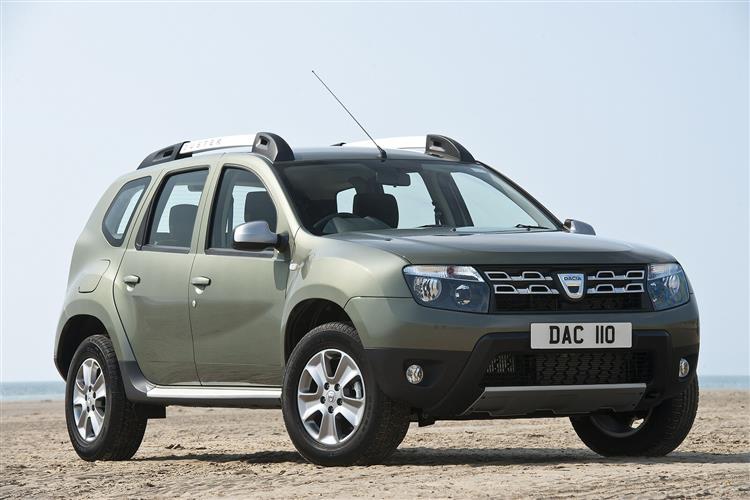