SEAT is supposed to be about 'enjoyneering', a marketing phrase the Spanish maker thinks is suggestive of dynamic driving, striking design and German technology. If all of that's true, then we should certainly see it in this car, the Leon SC, a shorter, sportier version of the company's best selling family hatch which was sold here between 2013 and 2017. Does it make a good used buy?

The SEAT Leon's always had an inherently sporty feel. Back to back World Touring Car Racing crowns in 2008 and 2009 helped of course but this aspect of the car's reputation is probably more down to the fact that customers have tended to prefer it in the more dynamic guises that have worn FR or even Cupra badges. It's the kind of branding most makers would pin to the boot lid of a spicy three-door or trendy little coupe, but the Leon line-up never offered us such a thing until the launch of this car, the Leon SC, in the Summer of 2013. Its existence was made possible by the clever MQB - or 'Modular Transverse Matrix' - platform around which the structure of all the Volkswagen Group's Golf-sized compact family cars was being based by 2013. Thanks to this, models produced by the German conglomerate could be lengthened or shortened almost at will by the constituent companies in the Wolfsburg empire, SEAT of course its Spanish outpost. So in this period, the Barcelona brand was able to easily lengthen its Leon family hatch to create the ST estate version. Or shorten it to bring us something sportier like this three-door SC. Could we go as far as to call this a 'coupe' rather than merely a three-door hatch? Interestingly, SEAT's marketing material from the time didn't do that, but then went to great length to emphasise this variant's quite distinct lower-slung dynamic character, before listing as direct rivals pretty much every affordable little family hatch-based coupe on the market. There wouldn't have been a dilemma if, like Renault, Peugeot and Hyundai, SEAT had decided to trade sensibility for style in creating a car of this kind. But the Spaniards weren't prepared to do that, preferring the idea of an affordable yet smartly sporting three-door practical enough for family people yet potentially stylish enough to get the odd admiring glance. Which is what we have here. It sold until 2017, when it was quietly deleted from the Leon range and not replaced.

What You Getword count: 777

SEAT say this Leon SC was one of their best-looking cars ever, a statement the Spanish brand would have been unlikely to have been brave enough to make had this Leon SC been merely a constricted version of the ordinary five-door hatch with a couple of fewer doors. But it wasn't. You wouldn't know this by focusing on the front end which encapsulates the brand's distinctive 'arrowhead' design approach with a familiar Leon look. So there are beady-eyed angular Audi-style headlamps flanking the usual trapezoidal SEAT grille. Move towards the rear and you'll find a shape than in comparison to an ordinary Leon five-door hatch is completely redesigned from the A-pillars backwards, with the sleeker bodywork sitting on a wheelbase platform shortened by 35mm. That gave this model more of a squat, sporty appearance than the five-door version - and a bit more driveway cred. Which you begin to better appreciate up-close. Though the so-called 'linea dinamica' line down each side is a familiar Leon trademark, in this form the car got much more pronounced rear wheel arch blisters, a roofline 13mm lower than a conventional Leon and a more rakish look thanks to a rear screen inclined by an extra 19-degrees. Stylist Alejando Mesonero-Romanos' idea was to create a more aggressive 'hunkered-down' appearance further emphasised by rear three-quarter windows that slope downwards in parallel with the line of the C-pillar. The clean, crisp, racy look is especially eye-catching when dressed to kill - as in this model's more dynamic FR guise. This was a trim package offered on all but the entry-level petrol and diesel engines and is enough to give the look of this car real coupe credibility, including as it does lowered sports suspension and sleeker bumpers that complement small but important touches like dark tinted rear windows and twin chromed exhaust pipes sitting below LED tail lights. Without such tinsel, the SC seems a little plain, so try and stretch to the 'FR' package if you can. And inside? Well apart from sports seats that sit you slightly lower in the car, the at-the-wheel experience is the same as it would be in any other Leon. The best that the Volkswagen Group can do in terms of chromed highlights and soft-touch plastic is naturally reserved for rival upwardly mobile three-door versions of the Volkswagen Golf and the Audi A3 but by the same token, this is in many respects a more interesting place to be. There are more charismatic touches like the unusual trapezoidal shapes for things like the door handles and the air vents. And you don't have to put up with arguably pointless features like push button starters and electronic handbrakes. We also prefer this car's higher placement of the infotainment touchscreen - or as SEAT likes to call it, the EASYCONNECT operating system - dominating the centre part of the dashboard and far more in your line of sight than it is in, say, a Golf. It's there to reduce button clutter by dealing with stereo, onboard computer, phone, navigation, parking and, if specified, Drive Profile system functions, all operated via a screen that comes in two sizes, with carousel-style graphics also replicated on the additional display you'll find in the centre of the instrument cluster. This is a practical place to be too. The big glovebox is one of thirteen cubby holes dotted around the car. Access to the rear seat is aided by wide-opening doors and easy-to-reach seat levers which both fold the seat back forward and slide the base towards the dash before returning it to where it was before, this SEAT's so-called 'Easy Entry' system. Once installed at the rear, you'll find a space that the Spanish brand rather ambitiously claims is large enough for three: three children perhaps. Two adults should be quite comfortable though on all but the longest trips - providing they're not basketball players: inevitably the roof height's a tad lower than it is in an ordinary five-door Leon. Impressively, the legroom's almost as good though - actually 14mm better than it was on the previous generation five-door model. As a result, if we are to think of this car as any kind of compact coupe, then it's a class-leadingly practical one. An observation that also holds true when it comes to the boot. The good news is that it shares the same 380-litre boot capacity with its five-door sibling. That's also the same as you get in rivals from this era like Vauxhall's Astra GTC and Kia's pro_cee'd. Even with the 60/40 split-folding rear bench pushed forward, only 60-litres of the standard Leon's capacity is lost, the total being a 1,150-litres. 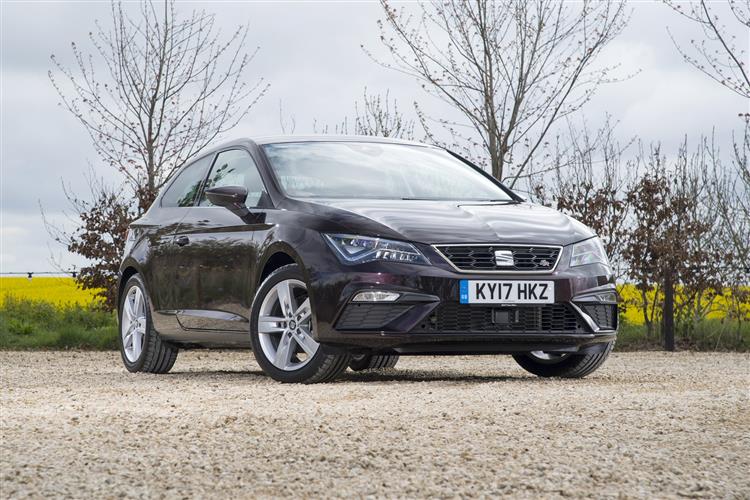