With this post-2015 third generation Tucson model, Hyundai got serious about the growing Qashqai-class family SUV Crossover segment, delivering pretty much everything customers were looking for in this kind of car in one smartly-styled reasonably spacious package. Early buyers were told that this car would 'change the way they drove'. This model has certainly changed this Korean brand's fortunes in this sector.

In an era where nearly a quarter of all European car buyers are looking at something from the SUV Crossover class, mainstream brands need to take this segment very seriously. Back in 2015, Hyundai did just that with this car, its third generation Tucson model. This Korean maker has done well on this continent with SUVs since the beginning of this century. By 2015, it had sold over 1.2 million of them, some of those orders accounted for by a first generation Tucson model that sold between 2004 and 2009. This was then replaced by a design sold in some markets badged 'Tucson' and in others (including ours) badged as 'ix35'. That model actually sold very well for the company in the family SUV segment, quickly accounting for over 20% of the marque's total sales. It was always thought this is the car you tended to buy in this sector if you couldn't quite afford the segment-leading Nissan Qashqai. By 2015, Hyundai's ambitions were a bit more far-reaching than that. Hence the replacement of the ix35 by this far more stylish third generation Tucson model, a family-sized SUV that made a move up-market and aimed to offer the prefect stepping stone toward the brand's smartly-proportioned Santa Fe seven-seat SUV. Compared to its predecessors in this segment, this Tucson offered original buyers higher quality, extra technology, greater standards of safety and more space - and they were promised sharper driving dynamics too. Mind you, it was priced to reflect that level of prowess: Hyundai has long abandoned its bargain basement beginnings. Can what's on offer here justify that for used car buyers and offer a genuine alternative to established players from Nissan, Skoda and Peugeot in this sector? Time to find out.

More than anything else, it's probably the design of this Tucson that will do most to interest Crossover buyers. The styling's been clearly inspired by the brand's larger and very good looking Santa Fe SUV and is a world away from the rather apologetic look of the old ix35 model this car replaced. Flowing surfaces, bold proportions and sharp lines certainly make it look one of the more attractive cars in this class. Take a seat behind the wheel and you get the commanding view over the traffic that SUV drivers like so much in a cabin that's smart and logically laid out. True, the splashes of metallic brightwork you'll find around the dash may clearly be painted plastic but they've been carefully chosen and fit and finish from the Slovakian factory is excellent - to the point where, to be honest, the soft-touch textures on offer around the dash show a lot of better established brands how it should be done. You don't even get the shiny steering column stalks that usually betray Hyundai's budget brand origins and in the centre of the fascia, there's the classy excellence of an 8-inch colour dash touchscreen that's your interface for controlling satellite navigation, a six-speaker DAB stereo and an integrated rear view camera. Take a seat in the rear and you'll find yourself in the most spacious cabin Hyundai has so far provided in this class. Rear passengers will also appreciate the provision of their own air vents, the seat heating you get on top models and the fact that the seatbacks recline for greater comfort on longer journeys. And out back? Well raise the tailgate - it can be electrically-powered if you go for top model - and a 513-litre boot is revealed, though that falls to 488-litres with the full-sized spare wheel that's provided above entry-level trim and uses up what would otherwise be a useful area below the boot floor. 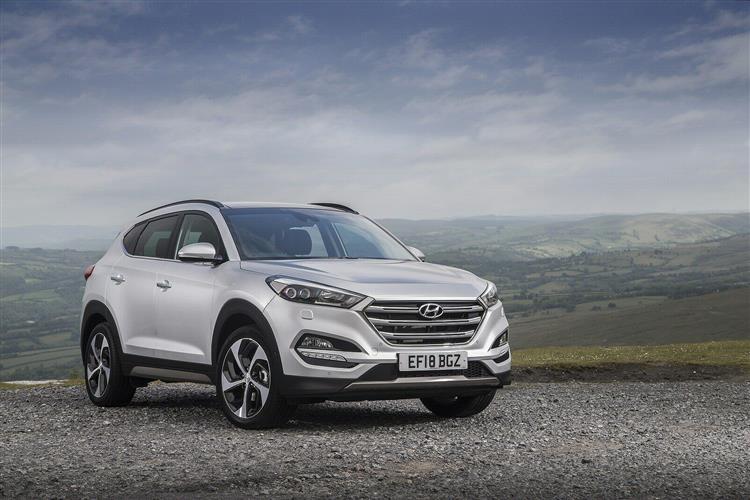