Skoda's third generation Fabia supplies the efficiency, the technology and the bit of extra class its predecessor was lacking. Practicality and value remain its strongest selling points, but in MK3 form, sense and sensibility aren't the only reasons you might want one.

It may no longer actively campaign as a budget buy, but Skoda's Fabia has always been the thinking person's value-focused supermini. With over 3.5 million sold since its original launch at the turn of the century, it's always aimed to give its customers more for their money - as does this third generation version. For a start, it's arguably the most spacious choice in its class from its era, reprising the appeal of the original MK1 model that sold prodigiously for exactly that reason. Back in 2000, Skoda had only quite recently discovered the space-efficient attributes of front wheel drive and with the first Fabia, the brand went the extra mile in maximising the benefits of that layout, creating a supermini pretty much as big inside as some older family hatchbacks from the next class up. Every small car maker had to match it and superminis quickly became so big that the market rather hurriedly created a smaller Citycar segment below them. The Fabia had proved to be a very significant car. With the second generation version we first saw in 2007, Skoda saw no need of a further increase in size - but did increase their pricing. Suddenly, rivals that had previously looked smaller and more expensive were back on terms with this Czech contender. It was no longer a unique small car proposition. With this MK3 model, launched in 2014, Skoda planned for it to be so again. Hence the provision of the biggest boot in the supermini class and the most spacious rear seat space. It could also be ordered in an eco-conscious 'Greenline' guise that delivered pretty much the lowest running costs it was possible to achieve in this segment in the 2014 to 2018 era. On top of that, styling packages gave this car a bit more attitude. And, as ever, it represented a very affordable way into Volkswagen Group technology that would cost thousands more in a comparable Polo or Audi A1. The original version of this MK3 model sold between 2014 and early 2018, after which it was replaced by a facelifted model range based solely around 1.0-litre petrol power. It's the earlier pre-facelift MK3 Fabia we check out here as a potential used buy.

What You Getword count: 302

This third generation Fabia apparently 'ushered in a fresh era in Skoda design', hence a look here that's all about sharp angles and bold edging. Where the previous model was a little too high and narrow, this one looks far slicker and more modern. As does the profile, with a more powerful silhouette and sharp 'Tornado' lines that feature on the five-door hatch and Estate models on offer. All of this is helped by the fact that this third generation design is 30mm wider and sits 90mm lower than its predecessor. The stretched Polo floorplan is the reason why this car can offer so much more interior space than most of its direct supermini rivals, something that's most obvious when it comes to boot capacity. With this issue, you find the main reason why buyers would choose a Fabia rather than Skoda's smaller Citigo model, which comes with a boot nearly 50% smaller. Once you've negotiated a fairly high loading lip, there's a hefty 330-litres of luggage space, which is actually 14-litres more than you'd get from a Ford Focus in the next segment up. Do rear seat passengers have to pay for all this cargo capacity? Not really. This was always one of the very few superminis in which three fully-sized adults could just about sit alongside each other - at least for short journeys. And it still is in this form. There's plenty of space up-front too, especially for elbows and shoulders, and it's easy to find an ideal driving position thanks to reach and rake adjustability for the steering wheel and a height-adjustable seat. Around the fascia's decor panel sits the other main interior change - the addition of a neat infotainment colour touchscreen, delivered in either 5 or 6.5-inch sizes, depending on the trim level you decide upon. 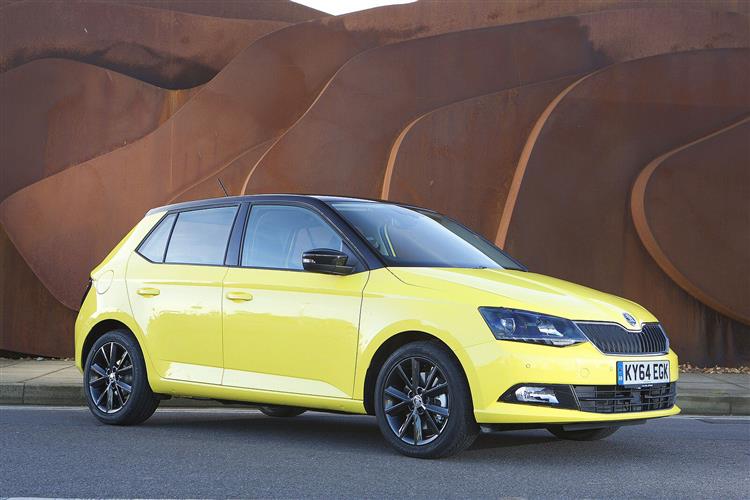