The MG3 is a supermini you probably won't have considered as a used small car buy. Yet it's fun to drive, practical to own and vastly more affordable than the conventional choices in this segment from its era. If you don't need class-leading efficiency and you're prepared to forgive a few rough edges in return for the big savings on offer, then it could rank as a very clever choice.

There's something about the two letters 'MG' that strikes a chord in the British consciousness. The brand named after 'Morris Garages' way back in 1924 has been a part of our automotive heritage for nearly a century, with its cars rolling down the Longbridge production line since 1962. Back in 2013, Longbridge began assembling another one, this Chinese-derived MG supermini. Of course, the modern-era MG brand is a very different car maker from the British company that filed for bankruptcy in 2005. As a manufacturer, MG looked down and out back then, but in fact, a new future was just beginning. The Chinese were looking for a foothold in the Western market and what was left of MG seemed tempting. In 2007, the country's oldest car maker NAC snapped up the business, then two years later merged with China's largest car producer SAIC, who build over four million cars a year, mostly European models from Volkswagen and General Motors under licence. They vowed to develop MG for the modern era with cars like this MG3, launched in 2013. This supermini model was badged as being 'British-built', though in fact, all the Longbridge factory did was to bolt together kits sent from SAIC's manufacturing plant in Lingang, China. It didn't do that for long. After a few years of production, MG3 were assembled completely in China. Still, even if it wasn't really British-made, it was true to say that this car had British development heritage, with its styling and drive dynamics created by many of the same talented folk who at the turn of the century brought us the surprisingly satisfying MG ZR, ZS and ZT family performance models. Chinese manufacturing clout also meant that the brand could bring this Fiesta-sized supermini to market for up to 30% less than obvious rivals. Which left MG able to claim what they saw as an unbeatable combination of fun and value for this car. It sold steadily to start with; the engine emissions were cleaned up in 2017 and the car was substantially facelifted and given a new cabin in 2018. It's the pre-facelift 2013-2018 MG3 models we look at here as potential used car buys.

What You Getword count: 828

Is this the car that would have replaced the old Rover 200 had not the British brand floundered into bankruptcy in 2005? Perhaps. Certainly it was a shape created by many of the same talented Longbridge designers, people now ensconced behind Chinese-owned CAD CAM screens at the SAIC Design Centre in Longbridge. It looks quite smart too, though in a kind of generic way that would leave you scratching your head if, with badges removed, you were asked to place the manufacturer behind it. All the expected modern design cues are certainly present and correct - blacked-out A-pillars, a wraparound windscreen and daytime running lights complementing a full-width black mesh front grille. And there's certainly nothing economy-minded about the way this thing looks. Up close and personal, you find many of the styling cues first seen in the MG ZERO concept car that first inspired this design, attempting to target young and style-conscious buyers wanting something a bit different. Inevitably, the production-ready look was watered down a bit but there's still enough individuality about it to interest the trendy budget-orientated fashionistas that MG hopes will want this car. People who the brand encouraged to personalise the look with bright and cheeky colours and options like exterior graphics, brighter door mirror finishes and wilder wheel designs. Whatever the finishing tinsel chosen, what it all boils down to is a five door-only shape that, though acceptably compact, is a touch larger than the Fiesta-sector norm thanks to a slightly longer wheelbase than is typical for this kind of supermini. Something you especially appreciate taking a seat in the rear. Headroom here is genuinely impressive and, for this class of car, there's a reasonable amount of legroom too thanks also to the way the front seatbacks have been sculpted. A couple of six-footers will be perfectly comfortable and three kids quite happy. Of course it's unrealistic to think of seating three adults here over long journeys: apart from the relative narrowness of the cabin, the middle portion of this rear bench has an unyielding shape that isn't especially comfortable. But then you could say the same of virtually any of the more familiar superminis in this segment, most of whom are significantly more cramped in the rear. And up front? Well, the driving environment will come as a welcome relief to anybody who's a bit baffled by the complexity and deep technology of many modern small cars. Forget infotainment screens, fancy dash layouts and slush-moulded fascias. There's nothing like that here. The uniformly dark hard plastic finishes are all very 2010, though can be enlivened with splashes of colour further up the range: there are silver door pulls, red touches around the stereo and the airvents and, if you've got a car fitted with the 'Tech' leather pack, lovely red stitching to bind the leather around the steering wheel and gearshift gaitor. Ahead of you lie a clear, purposeful set of red-needled MG dials with an Audi-style fuel read-out. It feels like a sporty car. Or at least it feels like it's trying to be. It's certainly all much nicer than the kind of atmosphere you'd expect to find in a car this affordably priced. If you doubt us, just go and sit in a Dacia Sandero after trying one of these. True, there are a few things MG should have worked a bit harder on: the small hard-to-use buttons for the ventilation and radio aren't ideal for example. But the black and grey-trimmed seats look smart and provide good lateral support and decent long distance comfort as part of a nicely set driving position further aided by a multifunction steering wheel that you can alter for both rake and reach. There's also decent storage on offer, with big door bins, several (rather small) cupholders, a large glovebox and a smart branded storage area on top of the dash with a neat concertinaring cover that conceals the USB and aux-in connectivity points so you can charge up your devices without them being on public display. And out back? Well the boot isn't the biggest in the class but it's certainly very class-competitive. You get 256-litres if you get yourself a car whose original owner specified a spare wheel rather than a silly little puncture repair kit. Otherwise, there's 285-litres on offer, pretty much the same as you'd get with more familiar supermini models like Ford's Fiesta, Vauxhall's Corsa and Peugeot's 208. Dacia's Sandero is the only rival offering significantly more, but we'd suggest the shape of this MG3's boot to be more practical. And, with the 60/40 split-rear bench pushed forward, this MG shades even the Dacia, offering a class-leading 1,262-litres of fresh air - though the space provided isn't completely flat. It is impressively large though, not only 25% bigger than you'd get in a Ford Fiesta but even larger than a Ford Focus from the next class up. More than you'd bargain for then. Which sums this car up. 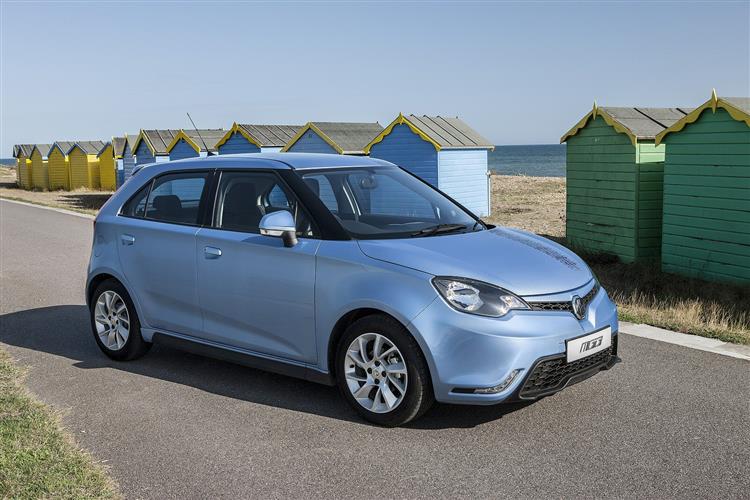