In 2014, we had to get used to the idea of a MINI Hatch with five doors - for the first time ever. With this 'F55'-series body style, you get a longer wheelbase, quite a lot more luggage space and potentially room for three people in the back. On top of this, there's the third generation MINI model's sophisticated design with underpinnings better suited to longer journeys. Oh and a range of punchy but economical engines. You wanted more MINI? Well you get it with this design.

Take a standard MINI, add a dash of length and practicality and you'd have a strong seller. You'd have a car like this, the MINI Hatch 5-Door. At this 'F55'-series model's introduction in 2014, the BMW brand talked of this design being 'the first ever 5-door MINI Hatch'. Actually, the Countryman SUV (launched in 2010) was that, but this was indeed, the first five-door version of the iconic MINI hatch. And it was a model well needed by the marque. There have always been, after all, potentially lots of folk who like the stylish frugality and fun, chuckable, cheeky demeanour of the MINI Hatch 3-Door model but simply can't justify that car's tiny rear seats and restricted boot. Possibly they've an occasional need to transport up to three kids in the back. And they require a car that won't be daunted by the modest proceeds of a family superstore shop. A car like this one? It certainly proved to be a strong seller for the brand, priced and sized in fertile territory somewhere between Fiesta-shaped superminis and Focus-sized family hatches. It was lightly facelifted in 2108, but it's the earlier 2014-2018 version we're going to evaluate here as a used buy.

What You Getword count: 384

The worst mistake any MINI can make is to lose its 'MINI-ness'. And much of that is, after all, tied up in this model's diminutive dimensions. Which, as it happens, aren't so diminutive these days thanks to the third generation Hatch design's small but significant increases in width, height and length. To these enhancements, this Hatch 5-Door variant adds 161mm of length and 11mm of height over its Hatch 3-Door sibling, all of this thanks to a wheelbase stretched by 72mm. But let's focus on what we're looking to analyse in this section: the differences that this 5-Door Hatch model delivers over its Hatch 3-Door stablemate. Nearly half of the extra length you get with this variant has gone into providing extra rear seat space, though to some extent, the issue lies in getting to it. The extra rear doors are really pretty small, so squeezing in and out can be tricky. Once you're inside on the rear seat though, the news gets better. Anyone who's ever been crammed into the back of a MINI Hatch 3-Door model for any length of time will be astonished by just how much space has been created here simply by increasing the length of the car by a mere 161mm. Partly thanks to the deeply sculpted seatbacks, you get 72mm more rear legroom than you would in the smaller model and that height increase is welcome too, freeing up 15mm more headroom. There's even 61mm of extra interior width at elbow height, despite the fact that all MINI Hatch models share the same exterior width. This was the first MINI hatch to offer more than two seats in the rear, though we're not entirely sure about the brand's claim that this makes the car 'a genuine five-seater'. The middle rear pew is, after all, next to useless for all except very small children thanks to this huge transmission tunnel. Still a couple of adults will be surprisingly comfortable, even on longer trips. Yes, even if they happen to be six-footers. On to boot capacity, the aspect that, more than any other, MINI owners have previously most moaned about. With this Hatch 5-Door model, you certainly get more of it, the 278-litre total being 67-litres up on that available in the Hatch 3-Door version. What To Look For 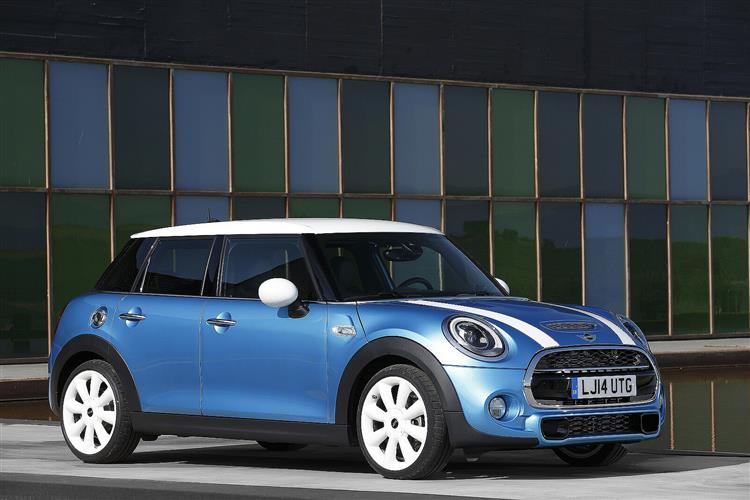