Prestige-branded compact coupes are usually simply sleeker versions of existing saloon models. The Lexus RC isn't like that, a coupe with an extra dimension of class that offers something rather different to the usual German prestige-branded choices in this segment. Here, we're going to look at the pre-facelift 2015-2018-era versions of the four cylinder variants of this car from a used buyer's perspective.

A sports coupe can be different things to different people. For some, it must be a rewarding driving machine first and foremost. Others though, want to balance dynamic virtues with qualities like cosseting luxury and impressive efficiency. It's to these people that this Lexus RC coupe is designed to appeal. In price and performance terms, this car is designed to suit those looking at coupes based on premium-badged mid-sized executive saloons - specifically Audi's A5 and coupe versions of the BMW 4 Series and the Mercedes C-Class. The RC shares some of its parts with a compact four-door model too, the Lexus IS, but it also borrowed a little more of its DNA from the larger, more Executive segment Lexus GS range - hence perhaps what the Japanese maker hopes is a more up-market feel. The kind of thing you'd want if you had to downsize from, say, a BMW 6 Series or even a Bentley Continental GT, but didn't want to make too many compromises in luxury. If that sounds tempting, then Lexus hopes you might also like this car's rather exclusive looks, derived from a concept car the brand first displayed at the 2013 Tokyo Motorshow. A year later, the RC was launched in production form, but only as a pricey high performance V8 RC F variant. It took until early 2016 for two more affordable versions of this car to be made available - a petrol/electric hybrid and the conventional turbo 2.0-litre RC 200t version. Both offer a more laid-back, luxurious approach to sports coupe motoring that Lexus hopes will please people tiring of the usual German alternatives in this segment. This original RC sold until early 2019, when it was replaced by a lightly facelifted model. It's the pre-facelift car we're looking at here.

One of the key reasons you might want this car lies with the way it looks. This mainstream version inevitably does without the arresting machismo of its high performance V8-powered RC F stablemate, but it'll still turn heads. Inside, the driver-focused theme continues in a leather-lined cabin deliciously different to the German class norm in its statement of style. Though much of it is derived from the brand's humbler IS saloon, there's still an agreeably expensive feel, with lovely touches like the metal surround to this analogue clock. It's not ostentatious and some of the materials are quite varied, but it looks good, unique, cultured and clever, especially in 'F SPORT' guise. The rear is accessed via doors so long that it'll be hard to fully open them in a cramped carpark. As for actual space in the back, well you shouldn't get your hopes up. Even by the standards of the compact coupe class, legroom is tight. Out back, boot space is a touch restricted too. Look a little more closely at what on offer though and the picture brightens. For a start, most versions of the RC 200t get as standard the proper temporary spare wheel that cost extra on those rival German models and would decrease their luggage space. There was no option for an original RC 300h buyer to get that though. Plus all four cylinder RC buyers get a 60:40 split-folding rear backrest that will allow you to accommodate larger loads. 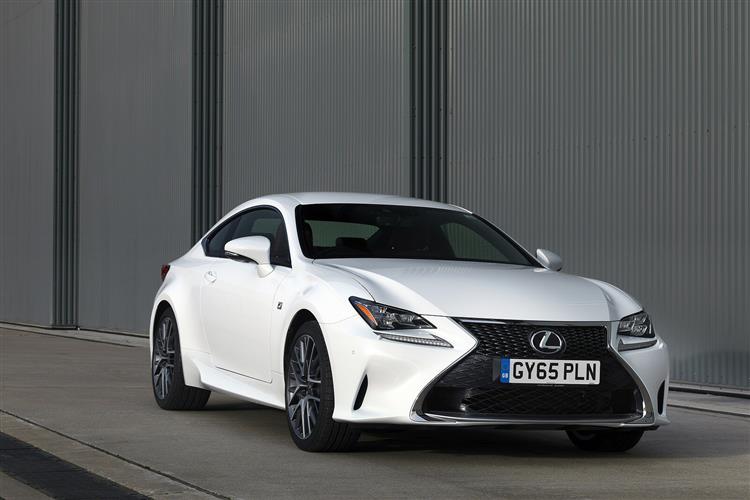