With its GS model, Lexus spent years trying to create a full-sized executive saloon alternative to cars like the BMW 5 Series, the Mercedes E-Class or the Audi A6. This is the fourth generation model introduced in 2012 and mainly sold here in hybrid form. This MK4 design was sharper than its predecessors, both to look at and to drive, as well as being safer and more practical. This won't be the first model of its kind you think of if you're looking for a used car in this sector, but include a GS in your deliberations and you might find it a tempting proposition.

The full-sized executive saloon segment in the UK has long been dominated by four cars - and this, Lexus' fourth generation GS - was never one of them. But then that's often been a compelling reason for a small but loyal band of management level business buyers to choose it as they sought to make a discreet but distinctive statement amongst a sea of BMW 5 Series, Audi A6, Mercedes E-Class and Jaguar XF models in the company carpark. Indeed, being different has always been what this car has been about, hence its 2006 introduction of the kind of pioneering petrol electric hybrid engine that rivals took ages to get around to matching. By 2012 though, the main segment players were starting to dabble with hybrid power, which led to a thorough re-think of this car by the Japanese brand in this GS model's fourth generation form. It was still rear-driven and there was still no diesel option. But there were key changes. Most notably, we got a GS450h hybrid variant more powerful, more practical and more efficient than before when it was launched in 2012 alongside a conventional petrol-engined GS250 variant that was then quickly dropped. A lower-powered GS 300h hybrid was added to the range in 2013, then a conventional V8-powered GS F sports saloon joined the line-up in 2015. The GS range was dropped completely in early 2019 to make way for the new front driven Lexus ES model.

What You Getword count: 495

This fourth generation GS was a more confident piece of design than any of its predecessors, an approach emphasised by the neat 'spindle-shaped' arrangement for the upper and lower front grilles, a sort of 'flattened hourglass' design now a trademark of all the brand's latest cars. The sleeker body is the same length as the previous generation model but slightly higher and wider and certainly more dynamic-looking thanks to shorter front and rear overhangs. Obsessive attention to detail is in evidence everywhere with things like touch-sensitive door handles and even tighter panel gaps, but it's especially evident at the rear, where the design narrows behind the flared wheel arches emphasising the wide rear track. Here, you'll find neat little aero stabilising fins on the LED light clusters and, on the hybrid model, a rear bumper artfully designed to conceal the tailpipes. And inside? Well interiors have always been a Lexus strongpoint and this one is no exception to the rule. Carefully crafted satin trim details, high quality stitching and brushed aluminium highlights are all pleasing to the eye, as is the analogue clock forged from a single ingot of metal. More importantly perhaps, the layout of the long, sculpted dash gives the driver and front passenger a sense of roominess and the shape of the front doors and centre console combine to offer the sense of being safely cocooned in the car. The dashboard is divided into two zones. One for upper displays, including the option of a huge 12.3-inch multi-media screen, the largest fitted to any production car from this period and big enough to fully display two different functions at once - say sat nav and stereo info for example. You scroll around it via this click-switch computer mouse-type controller, which is part of the dash's lower 'Operation Zone' where most of the main controls sit. Amongst these are the buttons for the clever 'S-Flow' air conditioning system which automatically closes off airflow to unoccupied seats to save energy and releases minute 'nanoe' particles into the airflow - negatively charged ions wrapped in water molecules - that cleanse the cabin environment and even moisturise your skin. It's a more driver-focused cockpit - and a more spacious one. Something that you'll especially appreciate in the rear. Revised door openings introduced for this MK4 model mean that it's easier to get in and out. And once inside, there's much more head, leg and knee room than the previous generation GS could offer, thanks to a re-designed seating layout and thinner front seatbacks. All well and good but what about the boot? Not to put too fine a point on it, the trunk capacity of the previous MK3 generation GS, in hybrid form at east, was pathetic - just 280-litres. With this MK4 model though, a vertical relocation of the hybrid system's battery improved things by a massive 55%, allowing 465-litres of space, a figure that improves to 552-litres if you opt for the GS250 model. 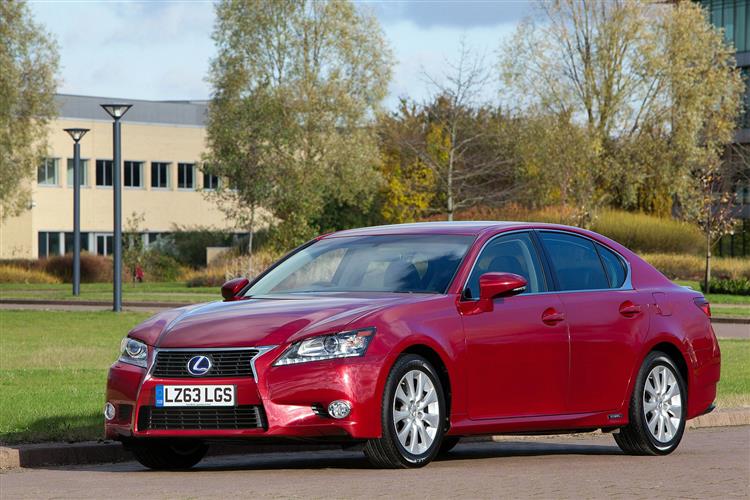