What should the ultimate sports saloon really be? Back in 2015, this GS F model answered that question from a Lexus perspective and in its three years of production, did so with characterful uniqueness thanks to its glorious naturally aspirated V8 engine. It's an acquired taste - but a very satisfying one.

Launched in 2015, the GS F was the closest that the Lexus GS model line ever came to providing a sports saloon to match the Teutonic players in the most dynamic part of the full-sized part of the Executive sedan segment. A proper old-school 5.0-litre 32-valve twin-overhead camshaft V8 set this model apart, loudly and proudly talking its torque without the need for turbocharging. It was all rather refreshing, particularly from a brand known primarily for eco-centric hybrids rather than driver-centric high performance. Inevitably though, there was a price to pay for this approach, both in power and at the pumps. The running costs of this model were closer to those of a lottery-winning supercar, while in terms of power, similarly-sized turbocharged rivals in the 2015-2018 period, cars like BMW's M5 and Mercedes' E63, generated 20-30% more. Meaning that for performance parity, potential GS F buyers had to compare this Lexus to slightly smaller super saloons like BMW's M3 and Mercedes' C63 in the class below. The GS F's Chief Engineer, Yukihiko Yaguchi, was unrepentant when back in 2015, he was questioned in any of these areas. The whole point of this car, he argued, was in the way it offered something different to its German turbocharged alternatives - as it had to. Lexus didn't have the turbo technology or the motorsport heritage of its Teutonic rivals, so there was little point in the brand trying to match that. As Yaguchi-san observed with typical candour, 'we chose not to get involved in a fight we can't win'. Not many new car buyers understood that perspective and the GS F sold in tiny numbers before departing completely when the GS range was replaced by the Lexus ES in 2019.

What You Getword count: 293

You don't look at this GS F and think 'street racer' in the way that you might with, say, a BMW M3 or a Mercedes C63. This Lexus has a demeanour a little above that sort of thing, yet it retains a very extrovert, purposeful and dynamic streetside presence thanks to the small but significant changes made over the standard GS model. Inside, the more mature theme continues. At the wheel of an M3 or a C63, you can never quite forget that you're in a relatively inexpensive car that's been heavily optioned-up. A GS F, in contrast, feels a more expensive, exclusive product, albeit one more suited to the boardroom than Brands Hatch. It's not ostentatious and some of the materials are quite varied, but it looks unique, cultured and clever, with the ambience dominated by the kind of lovely high-backed leather sports seats that rivals would include only as an exorbitantly-priced option. Getting comfortable behind the chunky electrically adjustable three-spoke F-branded leather-stitched steering wheel is easy and through it, you view a spectacular instrument panel derived from that used in the brand's LFA supercar. In the rear seat, you'll find another potential GS F selling point. This is an Executive-segment BMW 5 Series or Mercedes E-Class-sized model that most buyers will be considering as an alternative to smaller 3 Series or C-Class performance saloons. If that's your perspective and you come to this car after experience in the back of an M3 or a C63, you'll find that the rear of this Lexus feels very spacious indeed. For the boot out-back. GS F buyers have to have an electrically-operated boot lid which rises laboriously to reveal a 520-litre space that's 85-litres bigger than a C63 and 40-litres larger than an M3. 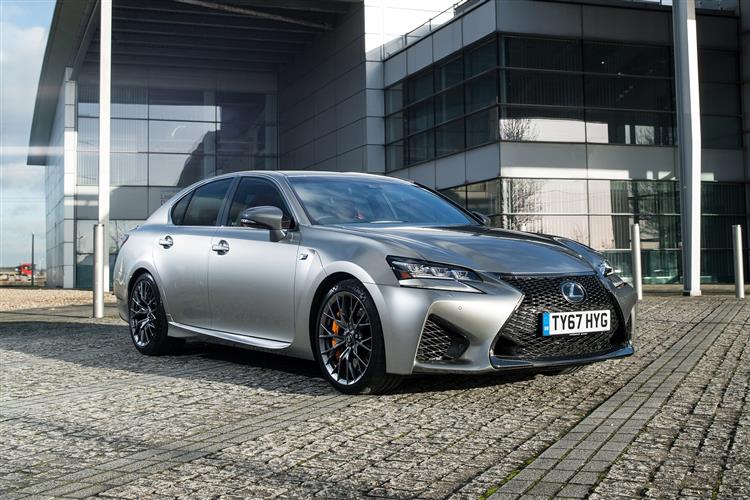