JOURNEY INTO SPACE (some text hidden)

Skoda's ordinary Rapid model launched in 2012 may have been a five-door hatch but it's wasn't a very conventional one. This separate Rapid Spaceback model launched in 2013 though, was much closer to the kind of thing that buyers in the Focus-sized family hatchback segment were expecting - the most class-competitive model the brand had yet bought us. It's bigger inside than most of its rivals from this period, plus was more affordable and better equipped. In short, used buyers should try one before simply opting for another Focus, Astra or Golf from this time. You might well be tempted.

If ever emphasis was needed of the importance of the Focus-sized family hatchback segment in the current market, this model provided it for back in 2013, it was Skoda's second offering in this sector. A year previous to this car's arrival, the brand had provided this class with its standard Rapid model. This Rapid Spaceback joined that design in the company's showrooms and together, these two cars aimed to more effectively bridge the gap in the Czech maker's model range between the supermini-sized Fabia and the larger Mondeo-sized Octavia. The reason why Skoda needs a couple of Focus-class models is two-fold. I've already mentioned the issue of age demographic - Skoda needs to court younger buyers while continuing with products that satisfy older ones. But there's also the question of conventionality. The standard Rapid hatch, launched late in 2012, has saloon-like looks that run contrary to buyer expectations in this class. And it's not really designed to suit those in search of a bit of extra flair in this segment. People in search of, well.. maybe something like this. The 'Spaceback' name might lead you to expect some sort of estate car - or at the very least, a variant with a bit more room than the standard Rapid model. In fact, this car is slightly more compact than its stablemate and the name is merely Skoda-speak for the kind of more familiar bodystyle more likely to appeal to the kind of buyer wanting a better value alternative to their usual Golf, Astra or Focus. It finally gave the brand a credible mainstream presence in this segment - and sold until it was replaced by the Scala in Spring 2019.

What You Getword count: 829

Is this what the original Rapid model could and should have looked like? You could certainly argue that. It's certainly a crisp piece of design work - and one you could imagine appealing to someone who had never before either owned a Skoda or wanted to do so. As a result, I'm guessing that this Spaceback version will considerably out-sell its standard stablemate, despite its smaller size and slight price premium. At first glance, it's not immediately obvious that all the stylists did here is to graft a more universally acceptable rear end onto the existing Rapid hatch. In fact, everything in front of the central B-pillar is shared with the standard Rapid, so the front end is characterised by the same distinctive chrome-framed 19-slat grille that flows smoothly into the headlamp clusters, dipping in the centre to accommodate the famous winged brand badge that sits centrally on a raised crease that rises from the bonnet to the base of the windscreen. Shorter rear overhangs and a more upright extended hatchback-style roofline mean this car loses 180mm in length to the rather awkwardly-shaped standard Rapid model, though on the plus side, the boxier shape brings bonuses in rear seat headroom. The rear end features the neat triangular insets either side of the number plate holder that we're now familiar with from the brand's other hatchback models, but more readily apparent is the effect of an aesthetic optional 'must-have' for many original buyers, what Skoda called its 'Style Pack'. This adds a full-length panoramic glass roof stretching all the way from the windscreen to the rear window where it combines neatly with a 'prolong' tinted rear screen for a contrasting look that works especially well on pale coloured cars. Without this feature, this car is visually unremarkable but with the Style Pack fitted, your Rapid Spaceback will really stand apart. The 'Spaceback' name is perhaps a piece of ironic Czech humour given that in actual fact, 'space in the back' has necessarily had to be reduced in comparison to the ordinary Rapid, due to this model's shorter length. Hence a reduction in luggage capacity from 550 to 415-litres. Mind you, that's still very good by family hatchback class standards from this period, 10% more than a Golf or a SEAT Leon, 20% more than a Vauxhall Astra and more than 30% more than you'll get in a Ford Focus. In fact, in this class, only Peugeot's 308 and Honda's Civic have larger boots - and even those two can't match the capacity this Skoda offers when its 60:40 split-folding rear bench is pushed forwards - 1380-litres, though unfortunately, the total loading area this creates isn't completely flat. If you do need to use the back seats for passengers, then you'll be pleased to find that the standard cargo area is very versatile. The loading lip is low and wide, so it's easy to get awkwardly-shaped things in and out. And, once your stuff's inside, not only do you get bag hooks and tie-down points but there's also the option of a dual-height boot floor that you can adjust to suit taller or shorter loads. Plus there's also a clever double-faced boot floor option that almost all owners will want. Turn it rubber-side-up for muddy boots or dirty dogs. Or flip it back to carpet for suitcases or shopping bags. I'd also want the optional netting programme which enables you to subdivide the boot area and separate your eggs from your Iron-Bru. And in the back? Well Skoda claimed the length reduction of this car over its standard stablemate had no impact on rear passenger accommodation and sure enough, when you enter through the wide-opening doors, you'll find the same comfortable space for two adults provided - though, as with any car in this class, three would be a squash. Headroom, as we suggested earlier, is aided by this Spaceback model's extended roofline and one adult six-footer can easily sit behind a driver of the same height, which can't be said of too many cars in this segment. At the wheel where again, it's all pretty much identical to the standard Rapid model, those familiar with the brand will feel quite at home. As usual with Skodas, the design is clean, functional but not particularly exciting, with many of the surfaces quite hard to the touch and things like the unlined storage bins suggestive of budget brand pricing. Still, everything is nicely laid out and seemingly built to last and there are plenty of useful nooks and crannies, including a slot for your parking tickets and useful storage nets on the side of the front seat backrest where you can get at them easily. A 'V'-shaped centre console rises up from the foot well to the main dashboard and houses both ventilation and stereo controls. Through the sportier three-spoke wheel, you glimpse a large, clear twin-binnacle instrument display. Nothing then to especially catch the eye, but everything perfectly in its place. 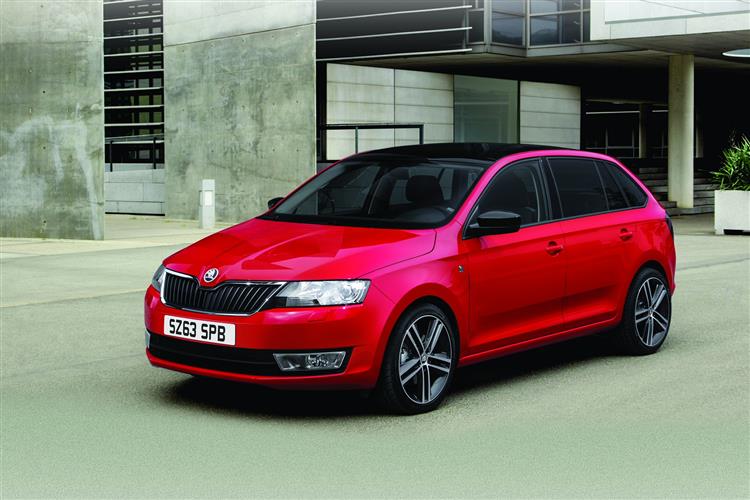