We tend to think of cars in either 'premium' or 'volume' terms. Here though, is one that could comfortably fit within either definition, the eighth generation 'B8'-series Volkswagen Passat. Though targeted at the medium range Mondeo sector, it's long had an appeal stretching beyond, up towards the premium compact/mid-sized executive saloon and estate segment. Global buyers like that and the result is a worldwide favourite the Wolfsburg maker simply can't afford to get wrong. Hence the smarter looks, extra technology and efficient returns of this classy MK8 'B8'-series model, launched in 2015. Let's check early versions of this design out as a used buy.

Volkswagen creates cars for the people who will buy them. And the people who will buy this Passat - medium range Mondeo class customers looking for higher quality - well, they're usually very sure of what they want: more style, better comfort and lower running costs. All of which this eighth generation model claims to deliver. 'We didn't set out to build a new car', the company says, 'we set out to build a new Passat'. The difference is important. While other manufacturers have been persuaded that models of this kind should be able to drive on their door handles, Volkswagen knows what its customer base really needs: a car that will lower the heartbeat, rather than raise it. And, as with any company that really knows its market, the rewards have been considerable. Over 3,000 new Passats are every day sold across the world, with a new owner taking delivery every 29 seconds. Over 1.1 million of them leave the showrooms each year, making this the company's best selling global model. With annual sales that amount to more than the entire yearly production output of BMW or Audi, it's a phenomenon. No longer simply an integral part of the Volkswagen range, it's now pretty much a brand in itself. The danger of such success is that it can result in an overly conservative approach when the time comes for changes. This was certainly true of this B8-series model's direct 'B7' predecessor, which inherited much from the previous generation 'B6'-series version. With the B8 though in 2015, the Wolfsburg maker brought us a completely fresh design. It had to really given that by then, all modern Volkswagens these days were sitting on a very different platform, the light, stiff and very clever MQB chassis we first saw used on the seventh generation Golf. That's important as it allowed this car to become sharper, cleverer and more efficient. So, whether you choose saloon or Estate, this MK8 model claims to be more responsive at the wheel. It can think for itself, even performing parking manoeuvres with or without a trailer. And it can return the kind of running cost figures you'd expect from a small supermini. This car was lightly facelifted in mid-2019; it's the pre-facelift B8 models we check out here.

What You Getword count: 587

The Passat has never been a trendy follower of fashion. Rarely has this model ever caused heads to turn or hearts to miss a beat. For all that though, it's remained quietly fashionable throughout seven generations and five decades of life, with under-stated yet sophisticated styling that confidently holds its own in almost any company carpark. Though the approach of this MK8 'B8' model is much the same, it's also a more dynamic thing than before, a car indeed you might even prefer over its stablemate, the swoopier Passat CC four-door coupe. Whether you opt for this model in this saloon form or in estate guise, it's certainly a design that refuses to be intimidated by any of its rivals. The front end is particularly sleek, with a swept-back windscreen and a lower bonnet line that blends into a smarter grille featuring four chrome bars that bend inwards towards the headlights in a trapezoidal shape. This Passat was the first to sit on the Volkswagen Group's clever MQB (or 'Modular Transverse Matrix') platform, a chassis that was far stiffer than before, yet which was also light enough to make a major contribution to the 85kg weight saving that this car enjoyed over its B7 predecessor. And inside? Well many Volkswagen Group cars tend to sell on the up-front experience that they offer and this one's no different. 'Different' though, might be a good word to describe the style of the minimalist dashboard. It's dominated by one long air vent with sleek integrated chrome fins that extends across the entire width of the interior like a band, interrupted only by the instruments and a smart analogue clock in the centre of the fascia. Below that lies the expected infotainment screen, 6.5-inches in size as standard or 8.0-inches if you get a car whose original owner opted for the Discover Pro sat nav system that can link with clever Volkswagen Car-Net connectivity to create a wi-fi hotspot within the cabin. Take a seat in the rear and the surprise lies in the fact that despite this MK8 B8 model's reductions in exterior length and height, it actually feels more spacious than its predecessor. It is too, with more room for legs and heads thanks to a lengthier wheelbase that enabled Volkswagen's designers to package this car more effectively. The extra 12mm of width makes it a little easier for three adults to be accommodated here, though the prominent raised centre transmission tunnel will still make life restrictive for the middle seat occupant. Out back, the 586-litre boot is class-leading in size, 21-litres larger than in the old B7 model and 10% bigger than that of an Insignia from this period and 20% larger than that provided by a rival Ford Mondeo. If you were looking at something like a BMW 3 Series saloon, you'd get just 480-litres. Should you want to extend this space, you'll have to avoid a model with entry-level trim which, rather meanly, deletes the folding rear bench option, but assuming that you have it, then 1,152-litres of space can be opened up using the useful boot levers. The Estate model is of course more spacious still, its boot (also significantly bigger than before) offering a full 650-litres of space up to tonneau cover level. Drop the rear bench and a total of 1,780-litres of fresh air can be opened up. Bear that in mind if you're tempted by a comparable Audi A4 Avant, where the respective capacity totals are limited to just 490 and 1,430-litres. 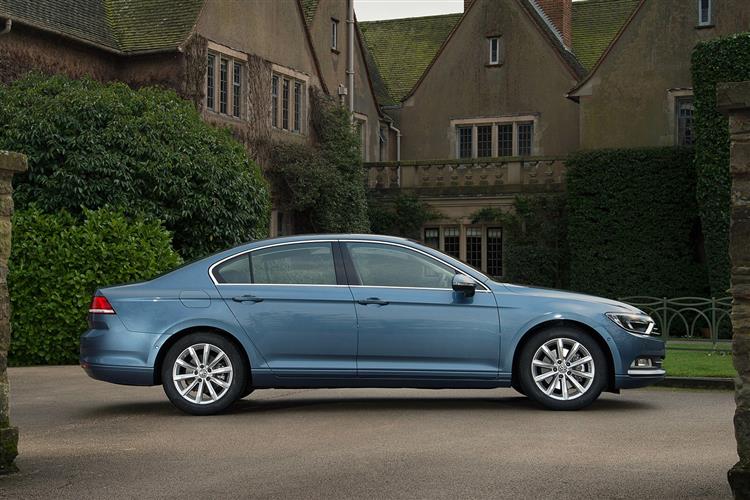