The MINI Paceman. A niche too far? MINI reckoned not back in 2013 when it launched this slightly larger coupe-like three-door fashionably-orientated hatch. It was basically a coupe version of the five-door Countryman model, which means sportiness with a bit of extra space all packaged up very trendily indeed. But does it make sense as a used buy?

Owning a MINI has always been fun but it's rarely been very practical. Lovely to have the go kart handling and dinky little shape of course, but over the years, many have quickly tired of the cramped cabin and rock hard ride. The only way the brand could keep these people would be to bring them a sporty MINI that was also comfortable and spacious. So in 2013, the company launched this car - the MINI Paceman. It was the eighth member of the MINI family and probably the hardest to pigeonhole. But that all depends on how you look at it. Let us simplify it like this. Back in 2013, there were essentially two kinds of MINI: the British-built Hatch, Clubman, Convertible, Coupe, Roadster and Clubvan models, all derived from essentially the same platform. And then there was a rather different, much larger five-door design with styling cues to give it a MINI look, built for the brand by Magna Steyr in Austria: the Countryman SUV. Take that car's greater comfort and practicality, then blend it with a coupe body style and a bit of traditional MINI fun and you'd satisfy quite a few potential buyers. That at least was the thinking behind the Pacemen. At the time, we thought it was an approach that made a lot of sense - but we were in a minority amongst those who tried to review this car, most of whom struggled to see the point of the whole thing and the reason why MINI would take a five-door Crossover SUV and try and make a fashionable little coupe out of it. We actually never thought the concept was very difficult to grasp: as we said, what we have here is a MINI that can be both sporty and properly spacious - a car the marketers have branded as a 'Sports Activity Coupe'. It sold in modest numbers until being quietly deleted from the range in 2016.

What You Getword count: 656

From launch, everyone seemed to have an opinion about this car and we suppose for any fashionable little trinket, that's a good start. Dismissing it as merely a three-door version of the chunky MK1 MINI Countryman is a bit cruel. The brand was, after all, is at pains to point out that though the two cars are identical up to the A-pillar, behind that this Paceman has a 39mm reduction in roof height and a 10mm reduction in ride height to give a sportier, more purposeful demeanour. It certainly looks less wilfully odd than the smaller MINI Coupe that sold in the same era. Walk around the car and you can see the effort that's been put in to trying to give this design its own personality. So as well as the familiar floating roof and blacked-out window surrounds, there are bulging wheel arches, little MINI logos in the indicator lenses and a rising waistline that converges neatly with the sloping roof at the rear of the car into quite a unique rear hatch. It's inside though, where things get a little more interesting - particularly at the back, an area easily accessible through the wide doors. The highlight is the unusual rear seat, which has been styled around a 'lounge concept'. That might be over-stating things it a bit but you do get two - and only two - individual chairs with armrests integrated into the rear trim. You couldn't exactly say that there's room to stretch out here but the couple of adults who'd never fit in the back of a MINI Hatch (and can't be accommodated at all in a MINI Coupe) should be fine on shorter journeys. One six footer can sit behind a front seat occupant of similar size without undue discomfort and it also helps that the front sports seats are mounted a little higher than they are in the Countryman, so you can more easily slot your feet underneath them. Despite the lowered roof height, headroom is actually quite adequate and to keep passengers interested in their surroundings, a two-section version of the MINI Centre Rail storage and attachment system - first seen in the Countryman - came as standard. A longer full-length version was optional. Up-front, apart from a few minor details (redesigned air vent surrounds and different instrument binnacle trim), it's pretty much exactly as per that Countryman model, which is either welcome or a bit disappointing, depending upon your point of view. It's certainly not very coupe-like: you sit high up and stretch down to operate the gear lever, just as you would in an SUV. As usual, you get a centrally mounted speedo the size of a dinner plate and big enough to also house the audio, the fuel gauge and the optional sat nav. Another classic MINI touch is the stand-alone rev counter tucked in its own binnacle directly behind the steering wheel and including read-outs for the fuel economy and the odometer, though it's necessary to slightly crane your neck over the centre steering wheel boss to read them. As for boot space, well the fact that this Paceman has the same wheelbase as a five-door MK1 MINI Countryman and is pretty much exactly the same size really pays dividends here. Access is via a large and high-opening tailgate and once you raise it to reveal a usefully low boot lip, you'll find that luggage capacity is simply in another league from conventional MINI models, despite the way that the tail lights protrude into the load area. The MINI Coupe can offer only 280-litres - and that's only because it has no rear seats. The MINI Hatch from this era has only 160-litres. In contrast, this Paceman's cargo area is 330-litres large and can be further extended to 1,080-litres by pushing forward split-folding rear seats that don't fold quite flat. There's also a useful under-floor compartment to keep valuables away from prying eyes. 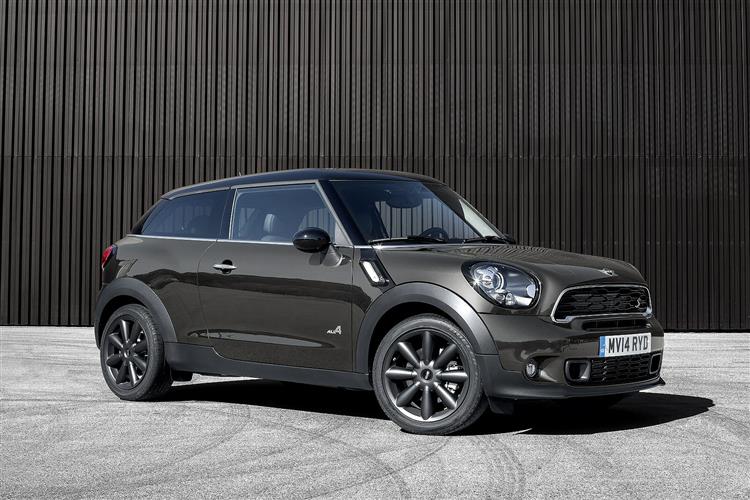