OPEN TO QUESTION (some text hidden)

Let's face it, you don't buy a used Volkswagen Beetle if practicality is at the top of your agenda, so why not go the whole hog and opt for a soft top? The third generation Beetle Cabriolet is strong on style and looks a really great ownership proposition. It's everything its predecessor needed to be.

Oscar Wilde tells us that the only way to get rid of temptation is to yield to it. And if you're amongst those who've always promised themselves a modern, affordable yet nostalgically styled convertible, then what you might well be thinking of yielding to is something like this, the third generation Beetle Cabriolet. This of course is the soft top version of one of the most iconic cars ever built, first introduced back in 1949 and still in production over half a century later, by which time over 330,000 open-topped Beetles had been sold. In 2002, the same Mexican factory that had made the final classic models began producing a 'New Beetle' Cabriolet and nearly a quarter of a million of these were made before the production run ended in 2010 to make way for the car we have here. Bigger, better equipped, with superior engineware and much-improved quality, this newer cabriolet arrived in the Spring of 2013 and proved to be a definite step upmarket, even though it still remained the most affordable route into Volkswagen soft-top ownership. It was also rather unique in the affordable drop-top segment, offering the kind of character buyers simply couldn't get in soft-top versions of ordinary family hatchbacks, the kind of rear seat space they'd never find in a convertible MINI and the sort of proper 'wind-in-the-hair' experience that couldn't be fully replicated by open-topped cars of the period like the Fiat 500C and the Citroen DS3 Cabrio that weren't really fully-fledged convertibles. This model got a mid-term facelift in 2015, at which point a trendy 'Dune' version was added to the range. Production ended in 2019.

What You Getword count: 787

A 'new original'. Is that what this is? Volkswagen reckoned so and you can see why. As with the fixed-top 'Coupe' version, the aesthetics of this design have far more in common with the classic post-war original than was the case with the 2002 'New Beetle' Cabriolet, that car's semi-circular wings defining jokey cartoon strip looks. Here, the styling is bolder, more dynamic and more masculine, incorporating much more of the feel of Dr Ferdinand Porsche's early 'Peoples' Car', most notably in the large wheels plumply positioned beneath flared flowing arches. So there's something of the past, artfully mixed with a sporty vision of the future in a car that's longer, lower and wider than its predecessor, with a longer wheelbase. It's also an awful lot stiffer, thanks to copious body strengthening across the floor and thicker A-pillars, which is why it won't judder about so much over the bumps. Most small soft-tops need vibration dampers to try and take care of that but this Beetle doesn't need them. Onto the electrically-folding roof which incorporates a proper heated glass rear window and powers back in just 9.5s to sit in typical pram-like fashion over the boot and block your view rearwards. Don't even think about buying a version of this car without the rear parking sensors that were only optional on base models. That apart, there's little to complain about, unless you object to having to fiddle about fitting the tonneau cover that comes with the car, there to smarten up the folded sandwich of fabric. We're guessing that most of the time, if you owned this car, you probably wouldn't bother. Diehard cabrio drivers who insist on continuing on top-down in the rain will find that the furled hood catches part of the water, then drops it on your passengers' heads when you put the roof up, a process that occupies 11s. But we're nit-picking here: this is at least a proper, fully-fledged convertible (unlike the giant fabric folding sunroof you get on rival soft-top Fiat 500s and Citroen DS3s from this period). And impressively, the electric roof operation is almost silent, in contrast to the asthmatic creaks and groans you get in a convertible MINI from this time. One of the advantages of the way the roof sits proud of the passenger compartment just above the integral rear spoiler is that it doesn't take up bootspace, which is pretty reasonable for this class of car at 225-litres, 24-litres more than the previous model, enough (if you can negotiate the narrow loading bay) for a couple of small suitcases and about double what you'd get in a comparable open-top Fiat 500 or MINI. If that's not enough, you can fold down the rear seatbacks using the provided neat levers, freeing up a lot more space. That's assuming you're not using the back seats of course. Unlike many of its rivals in the small convertible sector, this car has a big enough cabin to comfortably take four adults - for short to medium journeys anyway, provided the occupants aren't excessively tall. Those that are will appreciate a design that's freed up 12mm more headroom than was offered in this car's predecessor. When these chairs aren't in use, we'd advise that you try and use the removable wind blocker whenever possible. It makes a big difference to the cabin turbulence and stows away in a special slot in the top of the boot when not needed. And up front? Well, as promised, the interior does indeed feel more akin to that of the original post-war Beetle, in the unlikely event that you remember one of those, with the slab-sided dash the same colour as the paintwork in most models, even if it's no longer fashioned from crudely painted steel. The twin gloveboxes are a nod to the early car too (which is nice) but just as tiny (which isn't). In real time use, the elastic straps over the door bins (supposed to be able to hold a 1.5-litre bottle) aren't very practical either. There's more use of hard plastics in this Mexican-built model than you'd find in a German-made Golf, but they all seem tough and potentially long-lasting. You sit much further forward than you did in the previous generation version of this car, closer to the swept-back front windscreen, viewing a big central speedo flanked with rev counter and ancillary gauges through a sporty three-spoke thin-rimmed wheel. You'll look in vain for the MK2 Beetle's dash-mounted flower vase though. Good. Top models also get a triumvirate of additional dash-top dials as standard - turbo pressure, stopwatch and oil pressure - which seem as if they'd be a bit superfluous to the likely needs of typical cabriolet customers. 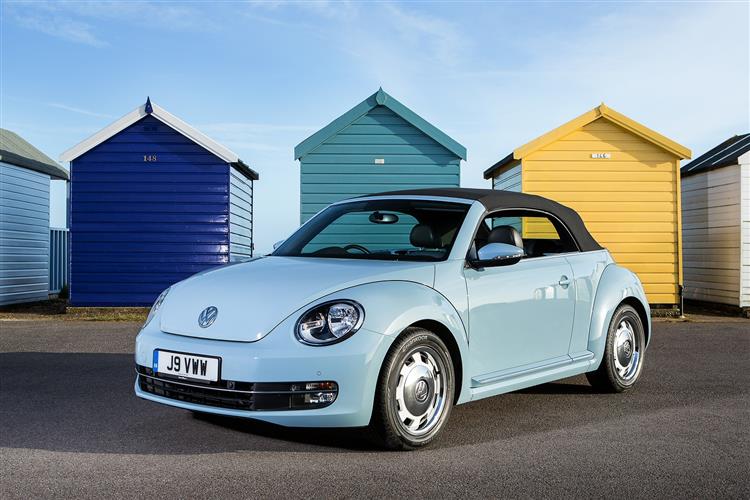