CZECHING OUT (some text hidden)

A Skoda Octavia was once one of the least sophisticated Volkswagen Group family hatchback products. Not any more. Almost nothing was held back for the third generation 'Type 5E' version originally launched in 2012 but then significantly updated in 2017. It's this improved version of the MK3 model (which sold between 2017 and early 2020) that we look at here from a used car buyer's perspective. Its unique selling points (as usual with an Octavia) lay in the fact that this car was bigger and better value than most of its rivals from this period, a Mondeo-sized medium range hatch for the price of a Focus-sized one. The difference with this updated MK3 design though, was that it was clever enough to change the way buyers thought about Skoda. Let's Czech it out as a used buy.

The Octavia nameplate actually dates back to 1959, but its real sgnificance began in 1996 when it first appeared on one of Skoda's modern-era Volkswagen-engineered models. This was a Golf-segment car with Mondeo-segment space, a recipe the market quickly embraced. Over the next two decades, more than five millon Octavias were produced for sale in over 100 countries and by 2017, production was taking place not only at the brand's factory in the Czech Republic but also on assembly lines in China, Russia, India and Kazakhstan. At its launch in 2017, this improved version of the MK3 model sat in between the Rapid hatch and the Superb in Skoda's line-up and promised to offer more space at a lower price than buyers could get from the three competitors in this segment that shared its engineering, the Volkswagen Golf, SEAT's Leon and Audi's A3. That meant use of the Volkswagen Group's stiff, sophisticated MQB platform and a well-regarded range of TSI petrol and TDI diesel engines. As to what changed with this enhanced package, well if you know the original version of this 'Type 5E' MK3 Octavia model, you'll notice the revised front end styling immediately. Skoda was also keen though, that buyers should appreciate this updated model's smarter cabin, upgraded media connectivity and stronger standards of electronic safety provision. In 2018, the 1.4 TSI petrol engine was updated with a 1.5 TSI unit of the same output; and an uprated version of the vRS sports model was launched, the petrol vRS 245. The MK3 Octavia range sold until early 2020 when it was replaced by an all-new fourth generation model.

What You Getword count: 391

For most of its production life, the Octavia model line always lacked a bit of street-side presence. With this revised third generation version though, the Skoda designers decided to put that right by giving the front end something of the look first seen in their Kodiaq large SUV. Not everyone liked the overall effect, but back in 2017, we thought that it delivered the kind of distinctive character this Czech contender had long needed. Aside from that, the recipe was much as it was before, buyers offered a choice of hatch or estate body styles that were all a small but significant amount bigger than most other cars in the Focus family hatchback segment in the 2017-2019 period. Inside, there was a much improved interior. The gauges flank a centre information display which brings all the main information you'll need into your line of sight - things like driving data, phone status, trip computer read-outs, a compass and the settings chosen for the navigation and audio systems. A lot of this was also covered in larger, more graphic detail by what was probably the defining feature of this re-styled cabin, a classily-prominent glass-fronted centre-dash infotainment screen that was fitted in different sizes across the model line-up. The top 'Columbus' 9.2-inch set-up is particularly slick, though it lacks the 'gesture control' functionality that the same design delivers in a Volkswagen Golf from this period. That's no great loss. Otherwise, the technology's the same, including the Navigation and integrated wi-fi features that the 'Amundsen' and 'Columbus' screens use to link into an infotainment online' package that enabled original owners to make the most of the Czech brand's freshly developed 'Skoda Connect' app. You enter the rear via wide-opening doors and once inside, you start to really appreciate the benefits of this Octavia's unusually long 2,686mm wheelbase - that's 50mm lengthier than a MK7 Volkswagen Golf. As a result, it's more spacious back here than any other family hatch-segment model from this period - at least for legs and knees anyway. Raise the rather heavy rear hatch and you'll find yourself looking at one of this Octavia's major selling points. A huge aperture opens the way to an absolutely huge 590-litre load area that's almost twice as big as the trunk you'd get in a comparably-priced Ford Focus or Volkswagen Golf from this period. 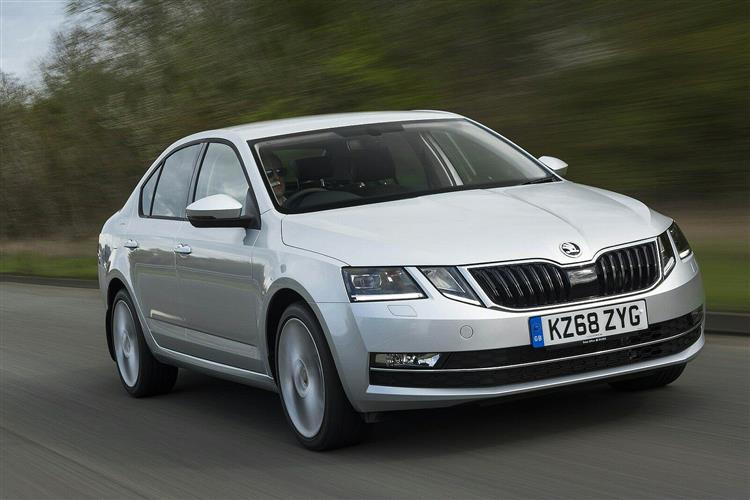