Back in 2014, Jaguar described this F-TYPE Coupe as the most capable and involving car it had ever built. A fixed-top version of the F-TYPE Convertible, this model cemented the Coventry brand's reputation as an ever more credible rival to Porsche, reviving memories of some of the company's legendary classic coupes. It handles. It goes. And it delivers.

The F-TYPE Coupe, launched early in 2014, was arguably the most significant car the Jaguar marque had made since the Sixties. Back then, buyers expected legendary things from this Coventry company. Cars like the C-Type and the XK120, 140 and 150 models were fresh in the memory, paving the way for the E-Type sportscar that arguably represented this maker's greatest hour. Sadly, that car proved to represent a pinnacle of performance it would take Jaguar another fifty years to replicate. But replicate it they finally did when open-topped versions of this F-TYPE were launched in 2013. Here, at last, were signs that Jaguar could again make a proper sports car, even if the finished product still retained elements of the laid-back Grand Touring GT philosophy more familiar from the brand's modern era performance cars. What, commentators like us wondered at the F-TYPE's original introduction, would a more focused fixed-top version be like, a stiffer, sportier, even more dynamic thing? This Coupe model was our answer. It's rigid, rakish and revs like a race car, whether you prefer V6 or V8 power. Depending on model, you can choose manual or Quickshift automatic transmission and either rear or All-Wheel Drive. This is, in short, a very complete, very special machine indeed. A 2.0-litre 300PS four cylinder model was introduced for the 2017 model year. The F-TYPE Coupe sold in its original form until Autumn 2019, when it was heavily facelifted. It's the pre-facelift 2014-2019-era models we're going to look at here.

What You Getword count: 326

'Engaging, precise, intuitive and alive - the definitive sports coupe'. That's the way that Jaguar describes this car and for once, the marketing rhetoric isn't too far from the mark, underlining the Coventry company's determination to go its own way and offer something different. As with the Convertible model, the shape's an interesting one, defined once more by what are described as 'heartlines'. You get a dramatic, cabin-rearward, sweeping roof profile. Providing an unbroken silhouette, it aims to highlight the visual drama of the tapered cabin nestled between the powerful rear haunches. There's also a lovely aluminium-finished side window graphic that's there to accentuate the compactness of the car and the roof profile. If you've opted for an AWD version, distinguishing touches include a deeper bonnet power bulge and more distinctive vents. Details like these add the finishing touches to what is a unique piece of penmanship, one that Jaguar's Director of Design Ian Callum says he's inspired by every time he sees it. As in the Convertible version, the two front occupants are separated by a prominent grab handle, which sweeps down from the top of the centre console and on automatic models wraps around behind a joystick-shaped SportShift gear selector: in contrast to other Jaguar models, there's no rotary gearshift controller here. Good. It's all symptomatic of the design team's determination to create something very different. An intimate place where luxury is not allowed to supersede purpose. Out back, the F-TYPE Coupe gives you substantially more luggage space than you'd get in its convertible counterpart - up to 407-litres, as opposed to 196-litres. That's a bit less than the combined front-and-rear cargo area offered by a rival Porsche Cayman, probably because of the fact that due to the location of the rear axle, the boot here has to remain quite shallow. That said, it's considerably bigger than that provided by a Porsche 911 - and easily large enough for two sets of golf clubs. 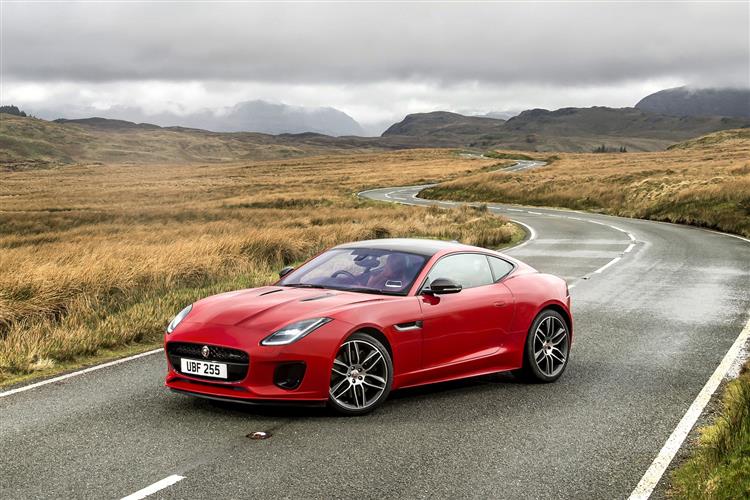