THE GALLIC OPEN (some text hidden)

The DS3 stylised performance compact cabrio was first launched with Citroen badging back in 2013, then re-launched as a stand-alone DS product when DS became a brand in its own right in 2015. It's this later 'DS' DS3 Cabrio that we look at here, a car that saw the brand through the next four years to the period where it could create its own bespoke designs. The change from 'Citroen' to 'DS' branding in 2015 was accompanied by a few changes, a light model refresh adding fresh engine options, more media connectivity and greater scope for individuality with this Cabrio bodystyle. This DS3 Cabrio is anything but a conventional convertible - but then, that's exactly why you might buy one. You don't get a full-blown folding roof, but then neither do you get the usual compromises in rear seat and luggage space - and there are no speed restrictions on soft top use. If you thought you could neither justify or afford a cabriolet, then this car aims to make you think again.

The small affordable cabriolet. It's a lovely idea in principle, inexpensive open-roofed motoring for those rare occasions when the sun makes an appearance. In practice though, there are often frustrating compromises to be made in a car of this kind. Here's one though, that doesn't require you to make too many: the DS3 Cabrio. Let us explain. Wouldn't it be nice if a model of this sort didn't buffet you roof-down and shimmy over bumps? Wouldn't it be neat if you could react instantly to the weather and retract its top at almost any speed? And wouldn't it be good if you could actually fit three people in the back if need be - and more than a token amount of luggage? None of the cars which most readily come to mind as affordable open-tops - say the MINI Convertible, the Fiat 500C or even the Mazda MX-5 - can satisfy on all these counts. This one can. No, it's not a full-blown convertible - but then the French DS brand argues that to be a good thing, the resultant design better suited to enjoyment of our testing roads and changeable climate. It was first introduced in 2013, back then bearing Citroen badges. After that though, the PSA Group launched DS as a unique stand-alone premium brand and upgraded previous Citroen DS models like this one to comfortably sit within that new marque's growing product portfolio. Hence the re-launch of this car as the 'DS3 Cabrio' in the Spring of 2016, creating the car we're going to look at here. There was more though, to this improved DS3 Cabrio than merely a different badge on the bonnet. Smarter styling was complemented by the addition of two fresh engines to the line-up, including one for the kind of properly potent hot hatch variant the standard model range had previously never had. There was also more equipment, extra scope for personalisation and, inside, extra media connectivity via a smartly hi-tech 7-inch colour touchscreen. It was all just about enough to sustain the car through to the end of 2019 when a new design based on a more modern CMP2 platform, the DS3 Crossback small SUV, took over.

What You Getword count: 383

The move to full DS branding brought with it the opportunity to re-style the front end, where the vertical grille was changed to proudly incorporate the 'DS Wings' brand logo and extends smoothly into headlights that feature 'LED Vision' xenon technology on plusher variants. At first glance you'd be forgiven for not realising this to be a soft top variant at all. After all, the profile of this model is identical to that of its fixed-top counterpart, the fabric opening section limited to the very top of the car. Actually though, the roof mechanism is quite sophisticated, made up of over 180 different parts and electrically operated by a button on the overhead console that, impressively, can retract the roof at any speed up to 75mph. Prodding the button once will slide the canvas back so that it concertinas like a busker's accordion above a rear screen which, if you continue to press the button, will hinge forward to lie on the parcel shelf, before the folded canvas sandwich motors back to take its place. As with the folding tops provided by most rivals, you'll find that when retracted, this one almost totally blocks rearward vision - hence the Cabrio variant's standard parking sensors. The roof acrobatics take only 16s from start to finish and when the whole thing's open, there's a pop-up wind deflector that springs out of the top roof rail to quell the worst of the turbulence. Of course, when you do have the roof down, you don't want it to take up so much space at the back that there's no room for people or packages. In the DS3 Cabrio it doesn't. Take rear cargo space, accessible via a cantilevered boot lid that rises neatly outwards and upwards in a circular motion that means you can open it even when parked close to obstructions. It's unfortunate that once it is open, the aperture available is pretty small, though actually, the capacity on offer is greater than it first appears - 245-litres in all. That's 30-litres more than you'd get in a rival MINI Convertible and 63-litres more than you'd get in an equivalent Fiat 500C. Plus you can extend it by folding down the same 60/40 split-folding rear bench you'll find on the DS3 hatch, revealing up to 980-litres. 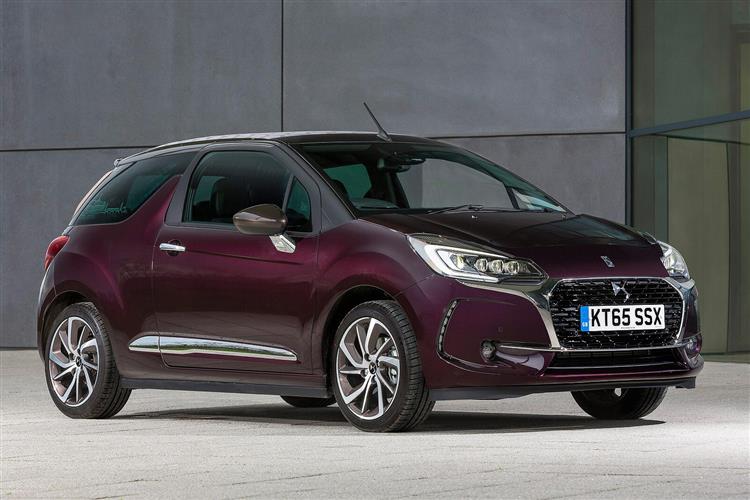