The Citroen-derived DS4, sold between 2015 and 2019, was a premium compact hatch that delighted in being a little different, with sporty 'five-door coupe' styling and plenty of signs of Gallic flair, whether you go for the standard version or the slightly more capable Crossback model. If you want something more individual than the usual Astra, Golf or Focus-fare. And a more interesting option than premium German compact models can provide, then provided you don't mind making a few minor compromises, it could well be worth a look.

The DS brand, we're told, is all about more distinctive style and technology. So back in 2015, we were interested to see what its interpretation of a premium-badged Focus-sized family hatchback might be like. The answer was revealed with this improved DS4 model. Prior to 2015, we knew this car as a Citroen. It was introduced in 2011 by the Double Chevron brand, but shortly after the formation of the newly-formed DS marque in 2015, this model was re-launched merely badged the 'DS4' with a smarter look and a much clearer idea of its target market. That was important, for in its Citroen days, this design's rather bizarre combination of family hatchback, coupe and SUV left it with something of an identity crisis Fortunately, the DS people seemed to understand it a little better, clarifying the appeal of this model line by creating two distinct variants. The 'Crossback' version kept the original car's high-ish ride height and added in a few carefully chosen SUV styling cues to try and attract buyers from the Qashqai Crossover set. Relieved of the need to appeal to such folk, the alternative standard DS4 model was left free-er to assume the role of premium sporty hatch and target people who might buy, say, a BMW 1 Series or Audi A3: or at the very least an Alfa Romeo Giulietta or an up-market SEAT Leon. Whichever DS4 variant appeals, you'll find it a quite sophisticated than before, especially inside where a 7-inch infotainment touchscreen includes Apple CarPlay and Mirror Link media connectivity. Get a car whose original owner spent money on spec and you can enjoy things that'll really set this DS4 apart from rivals from this era - features such as limousine-like quilted leather, unique two-tone paint finishes and technology clever enough to track the car if its stolen, notify you of upcoming service appointments and even email you if your DS4 is lent out and is then driven further than it should be. The car sold until 2019 and wasn't replaced.

What You Getword count: 454

We've had four-door coupes. When this DS4 was originally launched in 2011, its designers decided it was about time we had a five-door one. The stylists of rival models like SEAT's Leon and particularly Alfa Romeo's Giulietta will claim that this concept is nothing new, but cars like those aren't quite as extreme as this one. The swept-back roofline is more distinctly sporty, yet at the same time, your eyes are drawn to the other influences here: the sculpted wheel arches characteristic of a Crossover or small SUV. And the premium hatch feel of the chrome-finished waistline and the dark tinted windows. Both DS4 models feature brand-specific styling at the front, where the vertical grille proudly incorporates the 'DS Wings' brand logo and extends smoothly into headlights that feature 'LED Vision' Xenon technology on plusher variants. Up-front, perhaps the most distinctive feature is the panoramic windscreen. Push back the roof panels where sun visors would usually be and you're given an almost unique 45-degree view upwards. Sticking with the individualistic theme, you can change both the instrument background colour and the style of the read-outs to suit your personal preference. The central speedo dial doubles as an information centre, offering speed, trip computer, audio and compass settings. Anything this can't tell you will probably be covered on the central fascia infotainment screen, this feature re-designed in this later design to suit this model's more exalted DS brand status. It's a 7-inch colour touch-sensitive display with standard navigation, plus the usual audio, Bluetooth 'phone and trip computer options. At the rear, there's a dark, rather restricted feel not helped by limited legroom and the narrow, tinted side windows, while the pared-back roofline will leave headroom at a premium for taller folk. Better, we think, to consider this car as the coupe the DS brand was determined it ought to be, making comparisons with something like a Volkswagen Scirocco more valid than those with, say, a Volkswagen Golf. Viewed in that light, it's all pretty practical at the back - and quite OK for two adults or three children, as long as the journey isn't too long. Indeed, if you're in that frame of mind, you might even be quite happy to forgive the fact that the rear windows don't open. And out back? Well the boot has a high lip and a relatively narrow opening. Get your stuff inside and you'll find that it's 23-litres smaller than this model's Citroen C4 stablemate, but at 385-litres, is still slightly larger than the trunk provided in Alfa Romeo's Giulietta - or even in Volkswagen's Golf, plus there's much more space than you get in a Ford Focus or a proper coupe like that Scirocco model we mentioned. 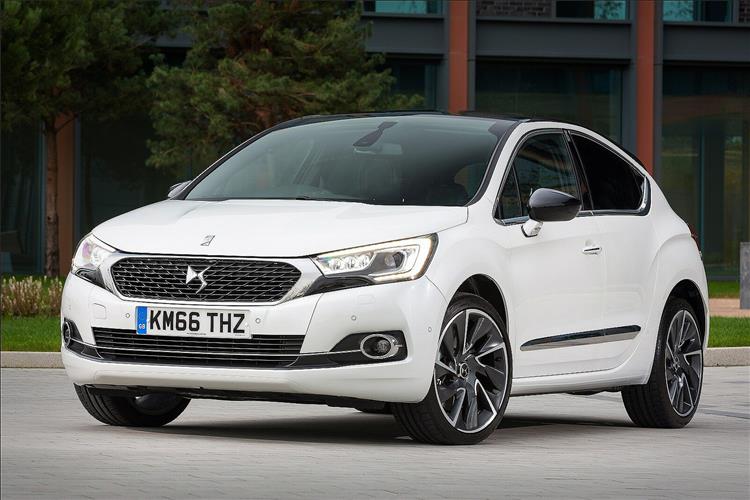