Dacia's Sandero set out to completely change the way family folk thought about budgeting for a compact family five-door car. When new, it was half the cost of many similarly sized models and surprisingly class-competitive in many areas given the 'shockingly affordable' prices being asked. Dacia gave the car a little more polish with a facelift in 2017 - and that's the version of this car that we look at here as a potential used buy.

At launch back in early 2013, probably the biggest issue with the original Sandero was its entry-level petrol engine, a thirsty 1.2-litre unit dating back to the last century. A modern downsized 1.0-litre powerplant took that unit's place as part of this 2017 facelift, introduced alongside a range of cabin upgrades supposed to make the interior feel less like an Armenian thrift store. Otherwise, apart from a minor exterior update, things were much as before, which meant that customers still got a model nearly as big as a Focus-sized family hatch for less than the price of a tiny citycar. Little wonder that Dacia quickly became Europe's fastest-growing automotive manufacturer. It was first founded in 1966, but the company only really took off when acquired by Renault in 1999 as an ultra-affordable brand for developing markets. It was for these countries that its first modern era product, the Logan saloon, was launched in 2004. Costing a mere 5,000 euros, it sold like hot cakes, encouraging the marque to launch a five-door version four years later, badged the Sandero. By now, the bigger more sophisticated European countries were surprising Renault management by also clamouring for Dacias, a demand that took so long to satisfy that it wasn't until early 2013 that the brand could be properly launched here. By then, a second generation Sandero had been launched, a smarter step up from the spartan original with more modern engineware and more up-to-date equipment. The pricing approach though was familiar, thousands of pounds lower than similarly sized competitors, delivering to British buyers a new car for less than the price of many comparable used ones. The facelift in 2017 carried the Sandero through to late 2020, when a new generation design was announced.

What You Getword count: 407

To understand the styling of this car, you also have to understand the way it was originally sold. In most cases in the UK, Dacia models sat in the corner of Renault showrooms. Important then, that designs from this Romanian brand could be seen as a fundamentally different proposition from their pricier Renault counterparts. The post-2017-era facelift changes to this car are most obvious at the front, where smarter double optic headlights borrowed from the brand's Duster SUV incorporate LED daytime running lights featuring a pattern of four stacked rectangles. These flank a re-styled grille featuring a honeycomb design and chromed bars flowing out from the central badge. And at the wheel? This was an area of the car which saw buyers of the original model having to manage their expectations to a considerable degree. In 2017, Dacia responded to customer feedback by re-siting the electric window switches from the centre stack to a more familiar position on the doors. Plus a 12v socket was added and the quality of upholstery fabrics much improved. What else? Well the boxy shape makes all-round visibility much better than it is on other more slinkily-styled supermini models, particularly when it comes to over-the-shoulder vision. As for cabin storage, well there a useful cubby in front of the gear lever incorporating a couple of cup holders, a small tray beneath the handbrake and another one on top of the dash. The glovebox is big but the door pockets are rather small and don't incorporate bottle holders. Aux-in, USB and Bluetooth connectivity is standard, providing you avoid entry-level trim. And in the rear? Well just by looking at this thing, it's clear that rear seat accommodation in a Sandero us going to be a considerable improvement on the relatively claustrophobic quarters served up by most modern superminis. Get inside and that promise is largely realised. As usual though on a compact car, expecting to take three adults on any sort of length journey back here is a bit ambitious. And the boot? Well it's annoying that there's no handle to open the hatch. Still, at least once you raise it, the opening is nice and wide, so it's easy to load in bulky items, providing you can negotiate the rather high loading lip. There are no really clever touches like an adjustable-height boot floor, but you do get a couple of bag hooks. In terms of total capacity, there's 320-litres on offer. 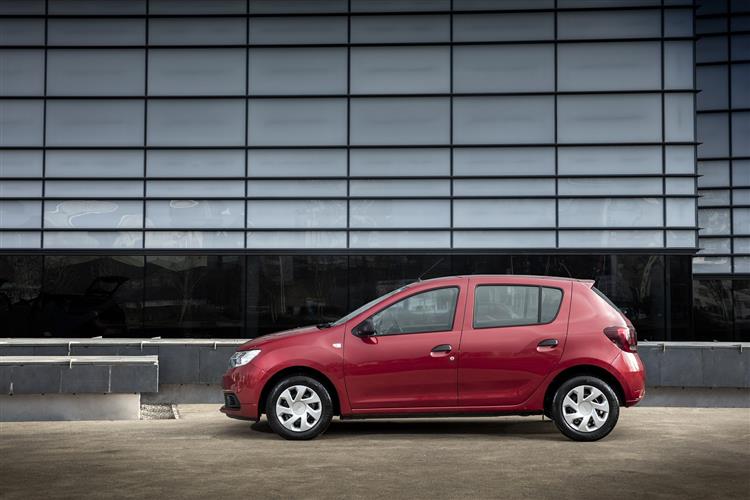