THE VAUXHALL OPEN (some text hidden)

Here's a premium product from a very mainstream brand. Vauxhall's Cascada is a proper four-seat convertible that would have really worried the premium makers were it not for issues of badge equity. For those prepared to look beyond that, this car offers luxury cabriolet motoring and head-turning good looks without the usual lottery winners' price tag. It's surprisingly desirable.

If you've ever owned an affordably priced convertible, then you'll know that cars of this kind come with one major problem: you can't comfortably fit adult passengers in the back over any real distance. That's because models of this sort are largely based on Focus-sized family hatchbacks that are compact to start with and become even more so at the rear once you have to find space for a bulky hood. Cabriolets based on larger, more prestigious designs do better, but they're expensive. You'd think then, that there'd be a gap in the market here - and you'd be right. Here's a car that fills it - Vauxhall's Cascada. This, the Griffin brand is at pains to emphasise, was a significantly bigger proposition than the small convertibles it was directly priced against following its launch in 2013, cars like the Volkswagen Golf Cabriolet and the Peugeot 308CC. Sure enough, there's a wheelbase closely matched to Vauxhall's large medium range Insignia model and a body length that actually exceeds that of an Audi A5 Cabriolet from the next class up, a far pricier drop-top that the marketeers behind this car thought was a credible rival. That was asking a lot, given that almost anyone spending any kind of serious money on a convertible tends to value badge equity just as highly as the style and substance of the car itself. Vauxhall though, was undaunted, and exactly as they did with their classic 'Prince Henry' and '30-98' models of the Twenties and Thirties, in this Cascada they brought us a pretty and practical convertible that was not only exceptionally affordable for its size but really was quite desirable. A car that challenged pre-conceptions of size and status in its market. It sold in small numbers until 2019 and wasn't replaced.

What You Getword count: 587

The Cascada scores straight off the bat by looking the part. British designer Mark Adams set out to create a convertible with classic lines reminiscent of the 'Grandes Routieres' - or 'luxury touring cars' - of a bygone age. Many will feel that with this low, sleek design, he did just that. It's certainly quite a size, at over 4.7m long and over 1.8m wide larger than an Audi A5 Cabriolet, let alone anything in the Volkswagen Golf-sized convertible class. When the top's down, it has a very clean profile, with no roof-top cover or visible roll-over protection disturbing the car's silhouette behind the steeply-raked A-pillar. We always think though, that the acid visual test of a car of this kind comes when you put the roof up, a process you commence either by pulling up a chromed switch between the seats or by pushing a button on the keyfob. The magnesium and aluminium mechanism then glides into life, in 17s revealing a beautifully tailored fabric hood that can also be ordered with polyester fleece between its two layers for extra refinement. Most will feel it all infinitely preferably to the bulky, ponderous metal folding arrangement used by some competitors. One of the problems with metal folding hoods is that they eat into boot space, an issue Vauxhall was keen to avoid here. Sure enough, with the roof up, there's lots of room to play with - 380-litres. When the hood's down though, that inevitably takes a hit, the figure falling to 280-litres with a space that probably wouldn't accommodate a decently sized hard case. Still, that's more than you could expect from a cabrio in the Golf-sized class and, in any case, it needn't necessarily be a problem if you're only travelling two-up, thanks to Vauxhall's neat FlexFold system, which electrically releases and folds down the 50/50 split rear seats, boosting carriage capacity to as much as 750-litres, the same as you'd get in an Audi A5 Cabriolet and over 50% more than you'd get in something Golf-sized. At the wheel where you sit quite high up, the cabin offers a mixture of Vauxhall familiarity - the kind of rather over-buttoned centre console you'd find in an Astra or an Insignia - with, in contrast, some hand crafted detailing you might not associate with this blue collar brand. The belt butler for example that extends over your shoulder and hands you your belt as you take your seat. The soft-to-the-touch high-quality stitched instrument cluster that tops a wing-shaped panel flowing into the doors. And the range of embossed fabric and hide finishes that include lovely Nappa leather. Get yourself a car with the optional butterscotch-coloured leather ventilated, powered AGR sports seats and you'll feel very special indeed. All of which leaves what is probably this car's defining feature, its back seat accommodation. Access to the two individual rear seats is about as easy as it's ever going to be in a convertible thanks to long doors and an Easy Entry system that sees the front seats fold and slide with a single lever pull. Once in place, most adults should be quite comfortable, provided they're not over six foot or sat behind particularly lanky front seat occupants. We won't pretend that you can really stretch out here or that we'd like to undertake a particularly lengthy journey, but it's all a world away from similarly-priced compact convertibles where in most cases, the back of the front seat tends to sit virtually against the rear seat's cushion. 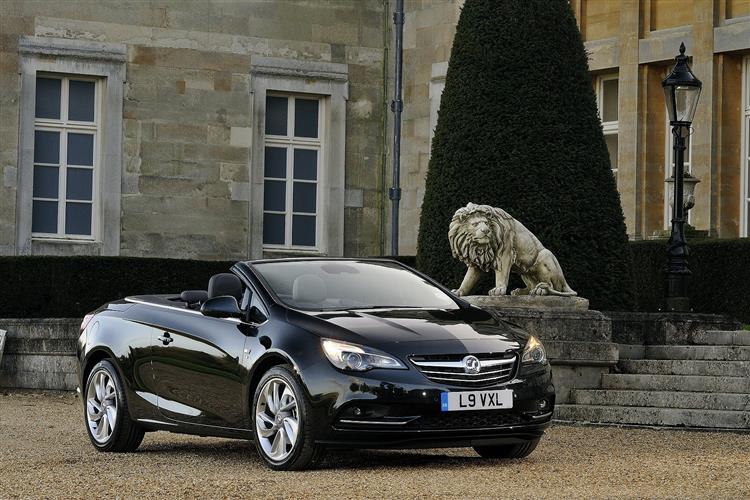