EVEN COOLER BRITANIA (some text hidden)

Jaguar's largest luxury saloon, the XJ, offered a very different option for boardroom buyers in fourth generation form, with unique styling and the promise of a more involving driving experience. It was originally launched in 2009 but in 2015 a package of mid-life improvements enhanced efficiency, connectivity and power: that's the version we look at here as a used buy. If you're in search of a used MK4 XJ, try to stretch to this enhanced version: it's a very credible choice in the full-Luxury segment.

Much has changed at Jaguar over the last few years and most of it began with this model, the fourth generation XJ luxury saloon, first introduced in 2009 but significantly updated in 2015 to create the car we're going to look at here. The history of this classic model line dates all the way back to 1968 and over the following four decades, XJ designs epitomised the kind of brand Jaguar used to be, all raffish wood 'n' leather, pipe smoking, sports jacket-wearing, Britishness. Of course, that meant very little to luxury car buyers in the US, Europe and beyond, hence at last, the need for a complete change with this very different MK4 model in 2009. Sure enough, at launch it was a contender that shocked the established prestige German players in the full-Luxury segment, styled and engineered to offer boardroom buyers something a little different. As it still does. While rivals often stay with the conventional looks and luxury-orientated driving dynamics that used to characterise XJ motoring, Jaguar made sure that its contender has moved on, offering top executives a little more involvement from something that'll still stand out in the company carpark. It's equally advanced under the skin for its period, developed with all-aluminium technology since carried forward into a whole range of new models that subsequently revitalised this Coventry company's model line-up - products like the F-TYPE sportscar, the F-PACE SUV, the XE small saloon and the rejuvenated XF. Here, those stiff, sophisticated underpinnings play a crucial part in the rewarding driving dynamics that define this fourth generation XJ and would also make this one of the lightest contenders in its class from its period, were it not for the weight of the heavy engines plumbed-in up-front. By 2015 though, this Jaguar was facing much more of a challenge than it had at launch. Completely re-designed sixth generation versions of the Mercedes S-Class and BMW 7 Series were setting new technological standards and an improved third generation version of Audi's A8 continued to campaign with the advantage of quattro 4WD. Hence the need for the much improved XJ model we're going to look at here as a used buy, with its enhanced V6 diesel, its classier better-finished interior, its more sophisticated infotainment connectivity and the extra traction of its All-Surface Progress Control system. In this form the car sold until it slipped away from the price lists at the end of 2020, a casualty of the SUV revolution.

What You Getword count: 424

It's easy now to forget quite what a stir this fourth generation XJ created at its introduction back in the Summer of 2009. Even now, the controversial 'teardrop' shape still dominates any discussion that touches upon this model and everyone you meet will have an opinion. Ex-Aston Martin designer Ian Callum is clear about the way the styling encapsulated his vision for a '21st century luxury car', believing that the brand should understand the values that made the original XJ great, without necessarily copying them. We'd agree: authoritative, elegant and powerful, the look of this car remains a refreshing alternative to the conventional boxiness of its premium German rivals from this period. Whatever you think of the exterior, it's difficult not to like the lovely cabin. Mindful of Jaguar's heritage, you enter expecting the ambience of a Gentleman's Club, but what's delivered instead is Brit design cool and an undercurrent of true indulgence, epitomised by the huge slabs of veneer that decorate the doors. The seats are beautiful too, powered and heated of course, with optional cooling and massage functions. They're trimmed in the post-2015 facelifted model in top trimmed form in quilted semi-aniline leather you'll also find in head lining stitched around the lovely dual-panelled sunroof that was standard across the range. Ahead of you is a deeply dished three-spoke leather stitched wheel, through which you view a 12.3-inch TFT LCD screen that replaces conventional instrument gauges. Even more sophistication lies with the key update made to this post-2015 facelift MK4 XJ model's cabin - the 'InControl Touch' infotainment touchscreen that sits above the ventilation controls, dominating the centre stack. It's your access point not only to the expected audio, climate, telephone and 3D Navigation functions but also to in-car wi-fi with a web browser, an optional Surround View camera system and a 'Live' section that when linked into 3G, will give you a Flight Tracker, plus Weather and News reports. And in the back? Well here, a very spacious cabin awaits, particularly if you've chosen a Long Wheelbase model with 125mm of extra body length. Quite a chunk of this has gone to benefit rear seat legroom, an extra 44mm of space making it possible to really stretch out. As for the boot, well activate the rather pointless power-operated bootlid and a 479-litre space is revealed. Directly comparable German-branded rival models from this period don't offer much more luggage space than this and that there's enough room for two large suitcases to sit side by side or multiple sets of golf clubs. 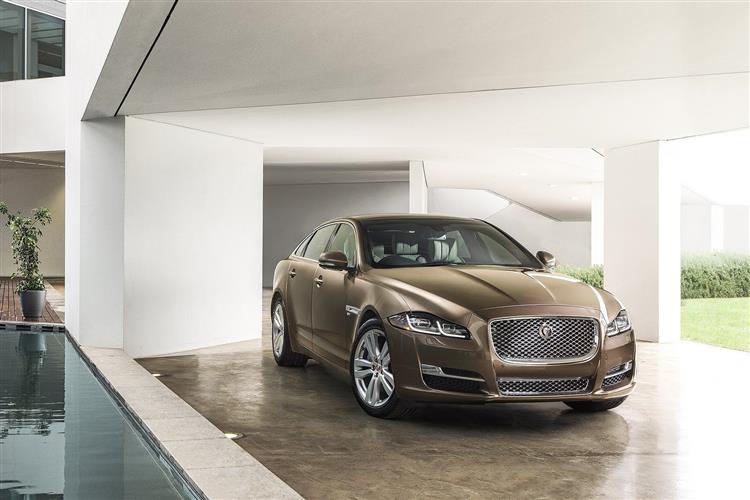