The second generation Kia Soul was a much-improved proposition, as it needed to be back in 2014 to avoid being left behind in a growing market sector for small Crossover models that was increasingly becoming stuffed with talented rivals. In becoming a little bigger and much better finished, with better refinement, extra equipment and the option of a clever all-electric EV model, Kia threw down the gauntlet to the market leaders in this segment. If you're looking for a small, stylish SUV from the 2014-2020 period, here's yet another way towards a trendier take on supermini motoring.

If one car could be said to have started the design-led revolution which has completely transformed the way that people see Kia, it was the original version of this model, the Soul. Fresh, funky, original and bold, it was launched back in 2008 to demonstrate that Kia really could design and engineer cars that were out of the ordinary, cars that were more than merely a means of getting from A to B. Cars if you like, with 'soul'. Today, the motor industry's constantly bringing us supermini-based Crossover contenders copying the market segment Kia pioneered with this model - that of the go-anywhere SUV lifestyle look packaged into a small, light but versatile 2WD urban runabout. The company's Californian design studio created the concept to appeal to US college students and the brand hoped the same approach would open up a younger demographic here in Europe too. It didn't. As it turned out, the majority of buyers of the first generation model were more likely to be collecting pensions than college degrees. A re-think was needed then - and it brought us this much improved second generation version in the Spring of 2014. Kia knew this MK2 design would face much tougher competition than its predecessor, so would need more universal appeal. But at the same time, the company was reluctant to lose the Marmite 'love-it' or 'hate-it' feel that with the original model did so much to change the way people thought about the brand. Eventually, the development team settled on the model we're going to look at here, retaining much of the previous look and feel but building on it in the creation of a car that was a touch larger, a little more practical and a lot better finished inside. They developed the drive dynamics too. With this MK2 Soul, we were promised a more involving and much quieter drive, even though the 1.6-litre petrol and diesel engines on offer turned out to be little different from those available before. Partly that was because much of the second generation model's development budget was devoted to the inclusion of an all-electric EV version in the line-up - Kia's first. It was another example of the kind of leadership in this segment the brand wanted to maintain, at least in terms of technology. For greater sales though, more conventional versions of this Soul needed to appeal to the fashionable single folk and small families being targeted by this class of car. They didn't. Sales were slow, despite a light facelift at the end of 2016. The EV model became rarer than hems teeth and the Soul's fate was sealed when Kia launched its more appealing Stonic small SUV a couple of years before production of the MK2 Soul ceased in 2019. We did get a third generation Soul in the UK, launched in 2020, but that car was only available in full-electric EV form.

What You Getword count: 853

Looks can be deceptive. If you're at all familiar with the first generation version of this car, then a casual glance at this MK2 model might initially leave you thinking that very little had changed. After all, as with the MK1 design, there's a tall, almost military-style square-cut stance with a high bonnet, a vertical rear hatch and bulging wheel arches. And, as before, the whole thing was simmered in Kia's US Californian design studio to give it a bit of surf shack attitude. Peer a little closer though and you'll find that much is different. 'Attitude' in fact, is the right word to use in relation to this car. The rather apologetic funkiness of the original version was here replaced with a sportier, tougher, more confident look that was 20mm longer, 15mm wider and 10mm lower. In this MK2 form, the Soul came of age. In fact, it grew up in more ways than one. The earliest versions of this Kia were based on the brand's Rio supermini. This MK2 car, in contrast, sat on the underpinnings of the company's larger cee'd Focus-sized family hatch. That wasn't enough to elevate this Soul beyond the ranks of Nissan Juke-sized supermini Crossover models and into contention with larger Qashqai-class ones. But then it didn't need to be, for the brand had its strong-selling Sportage model to compete in that segment. What the cee'd stuff did though, was to give this design a bit more space to breathe - to express itself. Specifically, that meant a sharper edge to the front of the bonnet and much more purposeful penmanship in terms of the lower grille opening, the bumper, the fog lights and the wheel arches. There was even a plastic vent behind the front wheel for the side repeater that could have been lifted direct from a Land Rover. As a result, this Kia's visual claims of go-anywhere SUV-ness were with this MK2 design that bit more believable, even if the hardware was still absent to make them a reality. Chief Designer Tom Kearns claimed that the bit he was happiest with was the more pronounced 'backpack' shape of the tailgate, with its seamlessly integrated tail lamp units. Along with the reclined roof and sturdy C-pillars, these also played their part in creating this Kia's tougher, more robust appearance. A look that with this MK2 model was founded upon proper family-sized practicality. Take the boot, which with this second generation car was easier to get to thanks to a tailgate opening that was 62mm wider. The cargo area was nearly 25% bigger with the split-folding rear bench pushed forward, with 994-litres available if you load to the cargo cover and 1,367-litres on offer if you stack your stuff up to the roof. These are totals that most small Crossover rivals from this era struggle to match: potentially, you're talking nearly three times as much space as you'd get in a similarly-configured Nissan Juke from this era, for example. Even if you need the back seat, you still get 354-litres - with further partitioned room available beneath the floor. That's significantly more space than you'd get in a Ford Focus from this time. Talking of extra room, the 20mm wheelbase increase of this MK2 Soul design suggested that the back seat might be a little more usable. Sure enough, it was. Older buyers trendy enough to embrace the bad boy styling will like the high-set seats and wide-opening doors. Maturing families meanwhile, will find that extra knee and leg space (and the lower central transmission tunnel) should, at a pinch, enable three burly teenagers to be more easily accommodated on this rear bench without too much grousing, especially given the generous headroom conferred by the distinctive high roof and square tail. Ultimately though, the happiest occupants in the back will, as with the MK1 design, be a trio of kids. And at the wheel? Well, this MK2 Soul's front-of-cabin experience was certainly an improvement from the brittle, plasticky atmosphere of the original version. You'll certainly perceive this to be a more expensive car than before, thanks to a better choice of materials, increased storage and a larger 8-inch central infotainment screen fitted to all variants save the entry-level model. There are soft-touch facings on the instrument panel, the centre console and the doors, plus extra touches of high glass and leather on most models. Plush variants even feature LED red mood lighting in the front speaker grilles. Lovely. As Kia promised, this MK2 design did feel a little more spacious up front. Narrower A-pillars help, as do greater levels of head and shoulder room. We also like the circular theme to be found not only in the deeply-recessed instrument gauges and the side door panels but also in the neat round fingertip controls you'll find on the three-spoke steering wheel. These buttons enable you to access most of the functionality you'll need without taking your hands from the helm but additional items still fall easily to hand thanks to the way the re-designed fascia has been sculpted to bring the relocated controls closer to the driver. 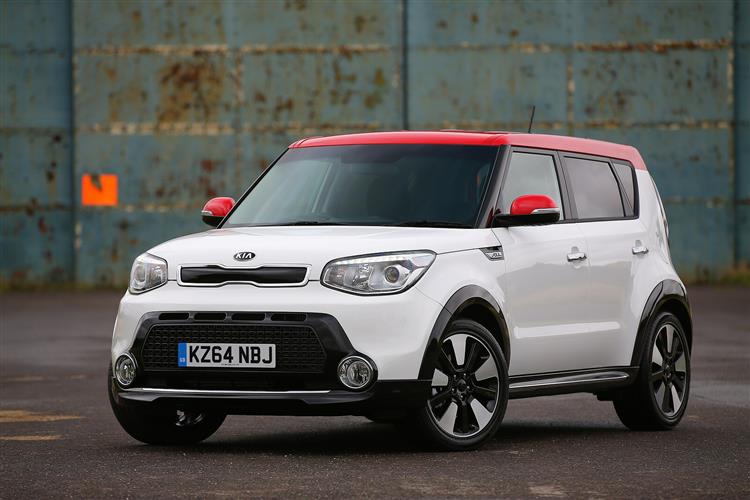