HOME ON THE RANGE? (some text hidden)

At its launch in 2018, the Hyundai Kona Electric aimed to re-define the kind of proposition we'd previously got used to affordable full-electric cars being able to provide. From launch, the 279 mile WLTP-rated driving range figure of the top 64kWh variant shamed volume versions of the market-leading Nissan LEAF, yet the price being asked here wasn't much different. But how does this Kona Electric stack up as a used buy?

No manufacturer is more invested in the whole concept of clean automotive mobility than Hyundai. The brand has eco-petrol, hybrid, plug-in hybrid and even hydrogen fuel cell options in its range. And of course, some full-electric battery-powered models. Here's perhaps the most appealing of them, the Kona Electric. Unlike Hyundai's other full-electric offering, the battery-powered version of the IONIQ family hatch, this car wasn't uniquely styled as a Prius-like eco-class model. But nor was it merely a converted version of a normal combustion-engined design as, say, a Volkswagen eGolf from this period would have been. Instead, this Kona Electric was something in-between in design concept - and it's something in-between when it comes to your driving range expectations of an electric vehicle too. Prior to this Hyundai's arrival in 2018, the full-electric car market was pretty much divided into a couple of kinds of contender. There were relatively affordable ones, like the Nissan LEAF, developed steadily to the point where their lithium-ion batteries could offer up to around 180 miles on a good day. Or for around twice the money, buyers could graduate to the more sophisticated battery technology that luxury models used - cars like the Jaguar I-PACE, the Audi e-tron, the Mercedes EQC and various Teslas. With these, a driving range of around 300 miles or more was the norm. This Kona's chief selling point is that it offered the kind of range you'd get in a luxury EV for the kind of price you'd pay for a more affordable one. As selling points go, that's a pretty strong one, though unfortunately for Hyundai, it wasn't an exclusive attribute. All the same engineering that features in this car could also be found for a similar price in its cousin, the Kia e-Niro. That car was also a compact SUV but was much less overtly styled as one, leaving this Kona probably better placed to capitalise on the market's craze for Crossovers. Those who wanted to satisfy their SUV desires in tandem with EV planet-consciousness were here promised 279 miles of WLTP-rated driving range if they went for the larger-capacity version. And, assuming the buyer install a 7kW wallbox charger in your garage, he or she would be easily able to completely re-charge the battery overnight. There's decent space inside, a big-ish 332-litre boot and acceleration that'll take you from rest to 62mph quicker than a Golf GTI. Sounds promising doesn't it? The Kona Electric sold in its original form between 2018 and Autumn 2020, when it was lightly facelifted. It's the pre-facelift 2018-2020-era models we look at here.

What You Getword count: 769

When Hyundai created its first mainstream electric car, the IONIQ, it started from a clean sheet of paper. But with this Kona Electric, the company was keen to show that EV design could be just as effective when it used a shared platform and body shell with combustion-engined cars. It helped that the model in question here is a high-riding SUV, so the batteries could be packaged in more easily without affecting cabin space, spread across the floorplan for a low centre of gravity, as they would be in a Tesla. Ki-Sang Lee, Hyundai's Director of Research & Development, says that Tesla's Model 3 directly influenced the development of this car, but in profile or from the rear, this really doesn't look like the unique piece of automotive engineering it actually is. In fact, you'd have to examine this car pretty closely to distinguish it from any other conventional Kona variant. Only from the front does this battery-powered model very clearly visually differentiate itself, mainly through its closed plastic grille panel, which incorporates a flap for the charge point. That necessitates a re-designed bumper, which incorporates active air flaps that enhance the aerodynamics. And you get a separate silver garnish connecting the high level daytime running lights. Under the bonnet, you'll find the electric power unit, integrated with the battery inverter and the cooling equipment. In profile, the look is much as it would be with any other Kona, though if you were to get your tape measure out, you'd find this one to be 15mm longer. The lower side skirts and wheel arch cladding is unique to this model, as are the 17-inch alloy wheels, though their rather fussy detailing makes it rather look as if plastic wheel trims have been fitted. From the side, this Kona Electric certainly has a chunkier, more overtly SUV-style demeanour than its Korean cousin, the Kia e-Niro, with a super-short rear overhang and a front wing design supposed to suggest forward direction. That's also the purpose of the rather unusual mid-level styling crease, which rises up from just below the door mirror before flowing back above the handles and easing into the power-packed rear C-pillar. Roof rails are standard and if you avoid entry-level trim, there's the option of a contrast-colour roof finish. Lower down, a further sill-level styling crease gives the flanks some shape. Move to the back and the styling flourishes come thick and fast. Your eye is drawn by the wrap-around cladding that houses the redesigned indicators and the reversing lights. And then perhaps by the slim high-set tail lamps, which are LED-lit. At the wheel, key change lies with the installation of a wide aircraft-style silver-trimmed centre console, which incorporates the 'shift-by-wire' push-button controls for the single-speed auto gearbox. And additionally includes a useful extra storage area in its lower section. Also quite different is the single-dial instrument binnacle, flanked on the right by an information screen and on both sides by EV read-outs. Everything else you'll need to know will be on the centre-dash screen, 8-inches in size on early variants (later upgraded to 10.25-inches), with mapping functionality that integrates into range read-outs and helps you to locate nearby charging stations. The clear, neat graphics of this display make it easy to use and switch between Energy Information, EV Routing, Charge Management and Eco Driving sections without having to spend hours briefing yourself with handbook tutorials. The cabin design is rather sombre and lacks much wow factor, but the comfy seats get standard lumbar support and there's reach adjustment for the three-spoke leather-trimmed multi-function steering wheel. Neither feature can be had in a rival Nissan LEAF from this period. And in the rear? Well it's in this part of the car that you're likely to be most keenly reminded that you've bought an SUV based on a supermini-sized platform, rather than that of a family hatchback. The Hyundai IONIQ you could have bought for a fraction less is a substantial 290mm lengthier than this Kona; the EV market-leading Nissan LEAF is 310mm longer. These are the kind of differences you'd expect to really notice once you take a seat inside. As it turns out, it's not too bad in the back for the carriage of two folk, providing they're not especially lanky of leg. If they are, then compromises will be need to made by the front seat occupants in order to be able to accommodate them. Push forward the 60/40 split-folding rear seat and you'll reveal a relatively flat loading floor with as much as 1,114-litres of total fresh air if you load to the roof. 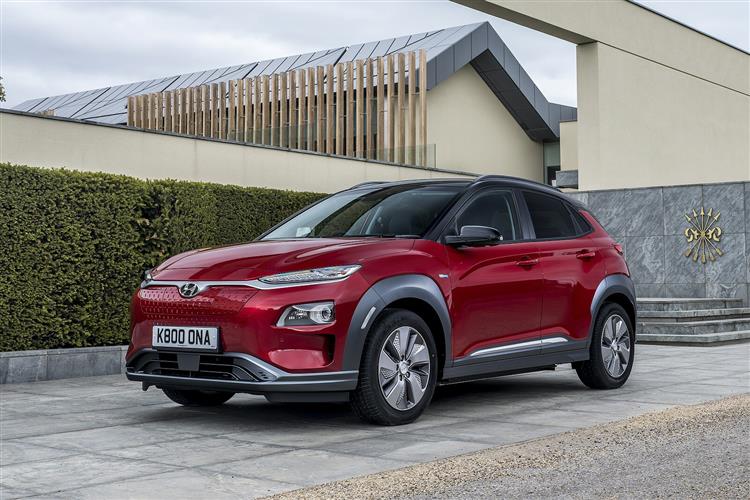