Back in 2017, with over 2.3 million sales of its Qashqai Crossover model on the board, Nissan went all-out to keep this second generation version ahead of an increasingly competitive chasing pack. So it got smarter, classier, cleverer, quieter, better equipped and more sophisticated. British designed and built, this one really earned its No.1 segment status; here, we're going to evaluate the improved version of this second generation Qashqai as a used buy.

Today, our roads are full of Crossover models, compact family-sized SUV-style hatches that blend the practicality of a family five-door with the lifestyle looks of a 4x4. Nissan didn't invent this concept but they've done more than any other brand to perfect it, most notably with this car, the Qashqai. This second generation version was rejuvenated in 2017 - and we're going to look at it as a used buy. It's strange now to think what a gamble this model seemed to represent when the first generation version of this design was originally launched back in 2007. Suddenly, Nissan showrooms had no conventional Focus-class family hatch to offer browsing customers; just a curious but rather appealing-looking contender offering something different - but not too different - to buyers bored with more familiar fare. They liked the lifestyle looks, the higher driving position and extra practicality. And were surprised to find few downsides in terms of running costs, driving dynamics and upfront asking prices. Quickly, the word got round and it was very soon clear that the Qashqai was going to succeed way beyond Nissan's wildest dreams. Initial plans for the brand's Sunderland factory to produce around 100,000 units a year were quickly revised - and doubled as this model line became the most successful in the company's history and garnered over 80 different industry awards. By 2014, a handful of competitors had appeared to try and threaten this car's market dominance, so Nissan moved the game on again with the original version of this second generation design, which slotted into a Crossover model line-up that by this time also included the brand's smaller Juke and larger X-Trail models. Three years on, with every other mainstream brand piling into this sector, the Qashqai was still selling in prodigious numbers, with a total of 2.3 million sales on the board and a regular place amongst the top four best selling cars of any kind in our market. Yet Nissan knew that improvements were needed - primarily in quality and technology. So that's what we were given with this lightly facelifted rejuventated model, which got extra luxury, stronger standards of safety and even the option of an autonomous driving aid. The car was further improved in early 2019 with an engine update that saw the introduction of a new-era 1.3-litre DIG-T petrol unit and improved 1.5 and 1.7-litre Blue dCi diesels. And in this form, this MK2 model sold until early 2021, when it was replaced by an all-new third generation design.

What You Getword count: 134

Nissan claimed that the most dramatic enhancements made to this revised second generation Qashqai were to its exterior, but apart from the more prominent front grille, the other changes are pretty difficult to spot. Inside, there's a revised steering wheel and more comfortable 'Monoform' sports seats with higher backs, extended bases and tapered shoulders. Plus an updated 7-inch 'NissanConnect' centre dash infotainment system with a slightly smarter user interface. In the rear, though the seats still don't slide or recline, they are positioned in a way that offers reasonable space for your legs, something aided with this updated design by slimmer front seatbacks with scratch-resistant plastic trim. Out back, there's a 430-litre boot. Once the bench is flattened, 1,585-litres of total fresh air can be freed up, which is very competitive by class standards. 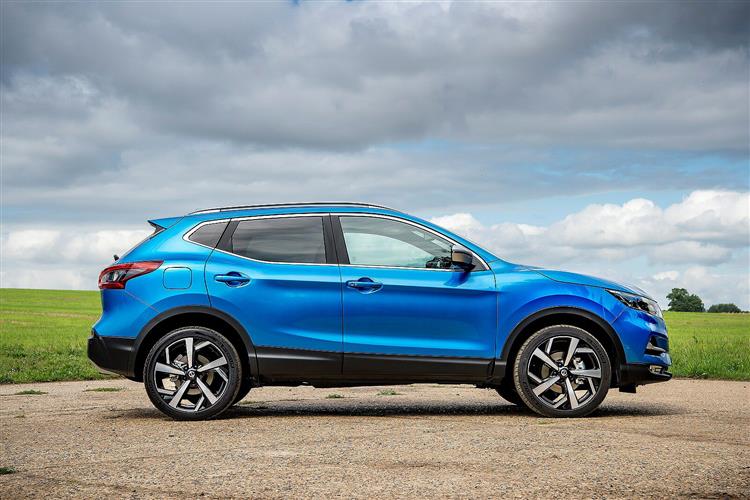