In 2016, the 124 Spider revived a classic name from Fiat's back catalogue and added some Italian glamour to the affordable roadster segment of the sportscar market. This Type 348 car shares much with the Mazda MX-5, its closest Japanese rival, but a lively 1.4-litre turbocharged engine delivers a unique feel that provides this model with much of its unique character.

Let us tell you a strange story. About a Fiat that was originally going to be an Alfa Romeo but which was primarily a Mazda. Welcome, to the modern era Fiat 124 Spider. You're going to need some explanation, but to understand it, it's necessary to appreciate a bit of back history. Let's start with this: affordable open-topped sportscar motoring really has three main eras. There's the British one of the Fifties and Sixties, with cars like MGs and Triumph TRs. Then there's the modern one, popularised by today's iconic Mazda MX-5. In between though, there was a period from the late Sixties to the early Eighties when for many people, a car of this sort simply had to be Italian. It simply had to be an Alfa Spider or a Fiat 124 Spider. Fast forward to the middle part of the 21st century's second decade and you find the Fiat conglomerate wanting to reclaim a slice of that history, primarily because at that time it was trying to re-establish itself in the USA, the market in which 75% of those old roadsters were sold. The problem was though, that sportscars are a niche segment, making it difficult to justify the huge investment required to produce something as good - or better than - the market-leading MX-5. But why bother, Fiat thought? Why not persuade Mazda to donate MX-5 underpinnings to a new product that could be given an Italian look and feel? It sounded like a good idea and was one initially pursued with a view to creating a new-generation Alfa Spider, until it became clear that model in question would have to be fundamentally built in Japan. Which was a problem, given that the Fiat board had just decreed that all future Alfas were to be built in Italy.. Cue a quick change of plan and a decision instead to pursue the same approach but use it revive the Fiat 124 Spider model line. Since the original 124 sportscar, the Turin brand hadn't offered a proper rear-driven sportscar, its only modern-era effort in this regard having been the front-driven Punto-based Barchetta model, launched in 1995. If Fiat was going to a proper rear-driven format and launch a new-era 124 Spider, it soon became clear that the production process would be complicated. Company policy insisted upon the new car using a Fiat engine, the 1.4-litre MultiAir turbo motor used in the Alfa Giulietta and Fiat 500 Abarth. The deal with Mazda though, required the new car to roll along the same Hiroshima production line as an MX-5. As a result, the Italian maker had to ship that MultiAir powerplant to Japan where it got fitted into the 124 and, if the car was to be sold in Europe, turned round and sent straight back again. Was all that effort really worthwhile? And was the car created a credibly different thing from the Japanese model it was based upon? Good questions. Let's try and answer them and decide whether this Fiat, launched in 2016 and on sale until 2020, is a credible used buy.

What You Getword count: 502

Reinventing any iconic design is always difficult. Get it right, as Fiat did with its new-era 500, and the rewards are massive. Get it wrong and the end result can look awkward and contrived. We'll leave it to you to decide which of these extremes are represented here, but would point out that the Turin stylists did at least make every effort to give this car its own distinct identity, not an easy thing to do given that it's essentially a re-skinned Mazda MX-5. It's from the side that you appreciate the extra length that Fiat has added to this design - it's 139mm longer than an MX-5. That might not sound much but in the metal, the change is enough to visually reposition this car - to the point where at first glance, you might well see it less as a dinky, nippy little MX-5 rival and perhaps more as a competitor for something like a Mercedes SLC or a BMW Z4. Key visual tweaks include the prominent lower side skirts and the 'swallowtail' rear haunches that directly reference the previous model. It's perhaps more significant though, to note that the alterations made have spoiled the standard MX-5 design's perfect 50:50 weight distribution. And inside? Well after all the changes made to the panelwork and the engine bay, it's something of a shock to find a cockpit carried over from the MX-5 virtually unchanged. There's a Fiat badge on the steering wheel, revised door panels and a softer touch, plusher material is used on the top of the dash. Otherwise, everything you see is exactly as it would be in the Mazda. We can understand why purists might object to that, but then a purist is unlikely to be considering an Italian sportscar built in Hiroshima anyway. Pragmatically speaking, there was really no need to change an interior that Mazda spent years in perfecting, offering as it does a driving position tailored to fit you like a glove. We should also talk about the hood, another feature that was unnecessary for Fiat to redesign in creating this car. It isn't electrically operated and it doesn't need to be because the opening and closing process is so simple - you just reach behind and pull up with one hand, a process that only takes a few seconds and requires activation of a simple roof rail clip-on catch. When conditions allow you to retract the roof again, it stows neatly into a compact space in front of rollover hoops separated by a clip-on wind deflector. One thing the roof doesn't do is compromise your bootspace - which is just as well since, as with any roadster, there's not very much of it. The extra length of this Fiat has freed up 10-litres more trunk room than you get in an MX-5 - there's 140-litres in total - but that's not going to make very much difference to the limited amount you can carry. If that's a problem, go and buy a hot hatch. 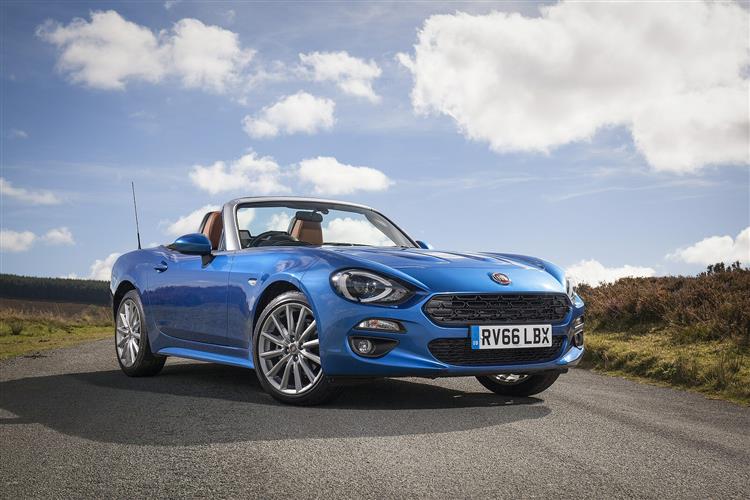