The PSA Group hoped that sensuality, innovation and avant garde design would be blended together in this DS 5 model, which was first launched with Citroen badges in 2011, then got a final run with DS-only branding between 2015 and 2018; it's that final run DS version we look at here as a used buy. The idea was to showcasing everything this fresh-thinking French maker wanted to deliver in the German brand-dominated mid-sized executive market segment. Bringing together elements of everything modern family motorists seem to like - Crossover, coupe, family hatchback and sports estate - it's an intriguing package that really does seem to offer something just that little bit different if you were about to opt for just another Mondeo-sized medium range model from this period - or perhaps a Teutonic mid-sized executive saloon.

A 'Different Spirit'. The meaning of these two iconic letters is the meaning too of the marque they represent. 'DS' is the Peugeot Citroen Group's avant garde prestige brand and this is the car this new nameplate launched with in late 2015, the much improved DS5 model. This contender was originally launched late in 2011, badged as a Citroen but showing clearly what the defining features of the future DS brand would be: style, innovation and technology. The three attributes indeed embodied in the design that inspired the creation of this fresh French marque, the very first DS model of 1955. That car, with its emotionally-charged styling and hydraulically-powered suspension, steering, clutch and brakes, was impossibly far ahead of its time. This was a premium saloon before the concept had even been thought of. At launch, this DS 5 didn't pretend to be quite such a trend-setter, but its market positioning was almost as distinctive as its illustrious predecessor. Here was a car priced and pitched against BMW 3 Series-style mid-sized executive saloons and top medium range Mondeo-class models. But offering a very different buying proposition. Classy, cultured and exquisitely appointed, it aimed to bring a slice of French couture to the company carpark. But there was a problem - and a very surprising one for a French luxury conveyance. The ride was poor, with even mild undulations making their way into the stylised cabin, a disappointing failing at odds with the car's luxurious character. Less of an obvious issue but an increasingly acute one given improvements made by rivals was the efficiency on offer from the original engine range. Changes needed to be made. They were in 2015. This revised DS5 got a redesigned damping system that considerably improved its ride quality. Plus a redeveloped range of engines were better able to deliver the figures business buyers were looking for. And all of this was delivered in an even more beguiling package, full of flair and fashionable technology. But it wasn't enough and this DS-badged DS 5 lasted just two years before the brand withdrew it from sale.

What You Getword count: 872

Back in 1955 when the original DS was launched, those two letters were a play on the French word deesse, or 'goddess'. They designated automotive beauty, again delivered here in a form that Citroen describe as 'moving sculpture' - that balance between fluidity and tension, compactness and space, efficiency, boldness and elegance. It's all there in striking harmony across a beautifully styled design that seems to change shape depending on the angle from which you approach it. The differences with this improved model mainly lie at the front, where the vertical grille proudly incorporates the 'DS Wings' brand logo and extends smoothly into headlights that feature LED Xenon technology on plusher variants. Designed to resemble jewels, these lamps incorporate scrolling indicators and deliver a unique lighting 'signature' that the brand planned to extend right across its future model range. The key styling feature though, was the slender chromed sabre that rises from the tip of the headlamp to the front quarterlight window, below which a similarly angled crease takes up the theme. This flows back rearwards above the door handles into muscular rear haunches that emphasise the swept-back coupe-style roofline. Chromed lower sills complete the premium profile. And the statement's equally unique at the rear, with its wide track, potent rear diffuser and glinting twin oval-shaped quadrilateral tailpipes. It's all very eye-catching, possibly to disguise the relative mundanity of what lies beneath the skin. Given that the brand's smallest model in the period, the DS 3 small hatch, was based on a Citroen C3 and the company's mid-range car of the time, the first generation DS 4 family hatch, was closely related to a Citroen C4, you might expect this DS 5 to be Citroen C5-flavoured. But you'd be wrong. It's hard to imagine anyone creating something dynamic out of the soft, springy, luxury liner that was the C5 and Citroen rather wisely didn't bother to try. So instead, underneath the DS 5's flowing metalwork lay a stretched version of the C4's family hatchback platform. In other words, this is a Focus-shaped car, not a Mondeo-sized one. It's hardly surprising then to find when you lift the rear hatch that the 465-litre luggage area on offer is about 25% smaller than you'd get in, say, a comparably-priced Passat or Mondeo from this period. The cargo capacity is however, reasonably comparable to the room you'd get in saloons like BMW's 3 Series or Audi's A4 from this time - or at least it is with the conventional petrol and diesel models. Opt for the top Hybrid 4x4 version and the bulk of a large battery pack reduces the loading space on offer to just 325-litres. Still, you'll still manage to accommodate two or three big suitcases and there's a ski-hatch for longer items. If you do need extra space, there's always the option of flattening the split-folding rear bench and freeing up 1288-litres, a figure that falls to 1145-litres in the Hybrid 4x4. Rear seat accommodation is another area where you might expect that Focus-class C4 chassis to limit things a bit, especially given this car's sloping rear roofline. You'll have particular cause for concern in this regard if you happen to have already tried the next DS model down in this period, the MK1 DS 4, which sits on exactly the same underpinnings provided here and condemns rear seat folk to a coal hole that's dark and claustrophobic. In a DS5 though, back seat passengers are much better looked after and the light and airy feeling created by the three-part glass roof will make you feel better about sitting in the rear. No of course the passenger room available here isn't in any way Mondeo-like, which means you can't properly fit three adults across the rear bench. Plus taller folk will find their heads scraping the ceiling. Aside from that though, there's quite a bit of leg and shoulder room and certainly no less space than you'd get in a BMW 3 Series or an Audi A4, so as there, two adults will be very comfortable and a trio of kids happily accommodated. When it's time to take a seat at the front, you'll find an interior that's even more avant garde than the bodywork. It's based around what the brand calls a 'cockpit' driving position where the main controls are grouped on two centrally-positioned consoles, one at a low level near the gear selector and one overhead. Both incorporate specially designed buttons, dials and toggle switches that the DS designers say were inspired by the aerospace industry. The big circular dials of the climate control system are tricky to read in bright sunlight but are certainly very different from the Teutonic norm in this segment and the 7-inch colour touchscreen that sits above them works far better than it did in the original version of this car, at the same time removing up to 12 buttons from the fascia. Everything's based around the concept of what the DS brand calls 'radical luxury' and is certainly very different to the commonplace, conventional cabins you'll find on most other cars in this price bracket. Garnishing it all, you've metal trim surfaces honed by NAS, the company that does the same for premium brands. 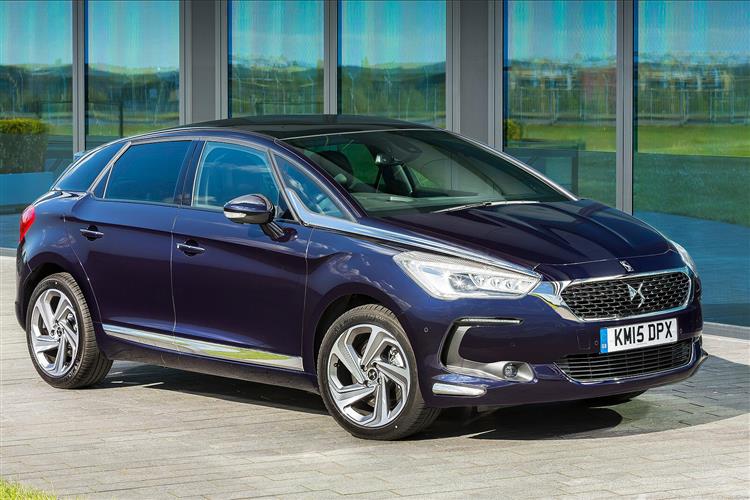