A TASTE OF ITALIAN (some text hidden)

Stylish, luxurious but still a potent performance weapon, the Maserati GranTurismo. Made between 2007 and 2019, is on paper, part luxury Grand Tourer, part serious performance sportscar. On the road, it feels more Maranello than Mercedes, thank goodness. A Maserati should be nothing less.

We're seeing a subtle repositioning of the Maserati brand. The famous Italian manufacturer is being edged out from the shadow of Ferrari where it's resided for too long and this GranTurismo sportscar, launched in 2007, proved to be central in terms of determining its new resting place in the market. Along with the MK5 'M139'-series Quattroporte four-door saloon on which it is based, the GranTurismo proved to be a slightly different kind of Maserati. Rather than simply offering top-end Italian sportscars for people who can't quite stretch to something from Maranello, the marque is these days focusing more acutely on luxury, comfort and the understated elegance that's always been part of the Maserati package. Performance seekers need not despair, though. They'll still get their fair share of brutal acceleration and finely-honed handling. The car was launched in 2007 in standard 405PS 4.2-litre V8 form, with the faster 440PS 4.7-litre S model introduced a year later, that bigger unit borrowed the Alfa Romeo 8C Competizione. A race-tuned MC version was launched in 2009, featuring the 4.7-litre engine in 450PS form (there was also a two-seat-only MC Stradale model with the same output, launched in 2010). A GranTurismo Sport model replaced the S in 2012, using the 4.7-litre engine in 460PS guise. A GranCabrio four-seat convertible was launched in 2010, using the 440PS 4.7-litre engine from the GranTurismo S; there was also a Sport version of this body style with the 450PS version of this engine. There was a subtle facelift in 2017, then the GranTurismo range sold until 2019, when it was replaced by the MC12.

What You Getword count: 234

The exterior lines have real drama about them, the three holes behind the front wheel arch referencing the MK5 Quattroporte saloon. The gaping Maserati grille with its silver trident dominates the front end below the long bonnet that plunges at the nose. There's a feeling of power in the muscular hind quarters, with the curves at the rear bulging around to form the integrated boot spoiler. Inside, the beautifully finished cabin is split in two by the wide transmission tunnel, while the V design at the top of the dash is said to increase the sporty feel by making occupants feel like they're sitting lower in the car. The seats all feature Maserati's trident logo on their headrests and there are subtle chrome inlays for the controls. The GT is a sizable 4,881mm in length, so it's a good 500mm longer than the old Coupe that this car replaced but the wheelbase is 126mm shorter than the MK5 Quattroporte saloon from which it borrows its basic underpinnings. Crucially to the more practical and luxurious direction that Maserati is being led in, the GranTurismo is a 2+2 and although claims by the manufacturer that it can sit "two adults comfortably even on longer journeys" do stretch the limits a little, there's definitely room for a pair of kids in those sculpted rear seats. The 260-litre boot though, is smaller than that offered by most rivals. 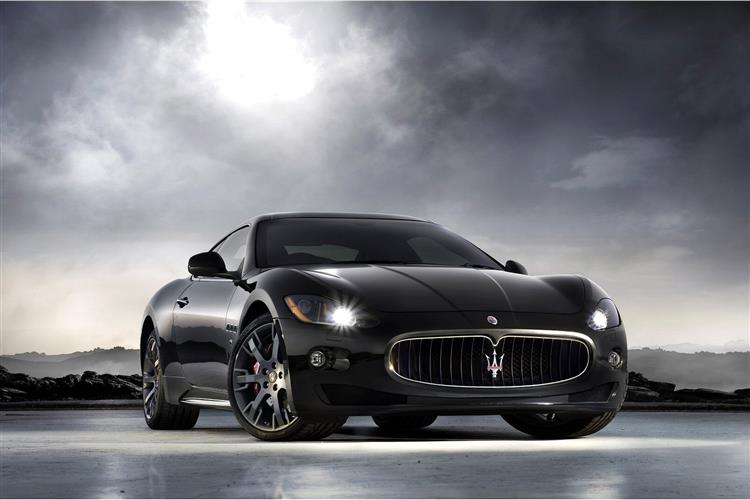