No doubt about it: functional budget-minded family motoring is best served by one of those van-based mini-MPVs. For many though, something like this is too square and boring to run as an only car. So what if someone made it smaller and cheaper so you could run one as a second or third car alongside something nicer. And what if they made it trendier too? That's what Fiat's Qubo set out to deliver.

Can a van-based mini-MPV ever be cool? It sounds unlikely but if any vehicle can pull such a thing off, perhaps it's this one, Fiat's Qubo. Not only does it look trendier than a car of this kind has any right to but it's also smaller than you might expect. Compact but versatile little cars based on vans have been around for some time but prior to this model's arrival in 2009 hadn't been previously been delivered to us this small. Whereas familiar names in this sector from this era like Citroen's Berlingo Multispace and Renault's Kangoo were family hatchback-Focus or Astra-sized, this one was no bigger than a Fiesta supermini yet still offered nearly as much space. It may even be slightly unfair to call it 'van-based'. Yes, you could see it as a Fiat Fiorino van with windows and seats but that vehicle in turn was based in Fiat's Grande Punto supermini. So let's stop trying to label this car and instead see it for what it is. A very compact four-to-five-seater family car that's small and nippy enough to twirl you round the tightest underground supermarket carpark, yet large enough to use on the average family holiday - a pretty tough brief to fulfil if you think about it. Fiat also created larger Doblo and Multipla compact MPVs for busy families but if you don't need the six or seven-seat options they provide, then you're probably better off with this one. Peugeot and Citroen both also sold their versions of this design (the Bipper Tepee and the Nemo Multispace) but these models didn't stay on sale as long as the Qubo, which got a minor facelift in 2016 and was only deleted from the Fiat price lists in 2020.

What You Getword count: 351

The Qubo has all the key design elements of a roomy small car nailed down. The wheels are pushed right out to each corner of the vehicle, the bonnet is stubby and the roof is tall. Practical then, but not a recipe for something you'd be proud to be seen in - or is it? The oversized bumpers and wheel arches, the dramatic rear side windows, the bottom edges of which slope steeply upwards towards the rear of the car: with the roof rails and alloys on the plusher versions, it makes it all almost SUV-like. You wouldn't be embarrassed to drop the kids off in one of these, though your offspring might be irritated to find that they can't fully open the rear windows. At under four meters from nose to tail, this Fiat may be no bigger than a Fiesta supermini but there's lots of space inside. More headroom, for example, than you could possibly find a use for, plus legroom is ample for four adult-sized passengers. There are a reasonable number of internal storage areas, including a large glovebox, and the hose-clean flooring is sensible on a car like this. Access to the rear is helped by the wide-opening sliding doors on each side of the car and in contrast to many of today's compact supermini-based MPV offerings, the large, square boot is very generous at 650 litres with all the seats in place - or 330-litres under the sturdy parcel shelf. That's the kind of space you'd expect from something much larger. The rear seats split-fold down 60:40 but if you want to get maximum cargo on board, you'll need to remove them completely. This procedure converts the Qubo back into something approaching van form with a huge 2,500-litre capacity, accessible via a low, flat loading lip and full-width tailgate. As an alternative to this, an optional pair of vertically-split, side-opening back doors was offered for those seeking wheelchair conversions. For the transport of big, long items like, say, an adult bike, the designers even thought of a front passenger seat that folds into the foot well. 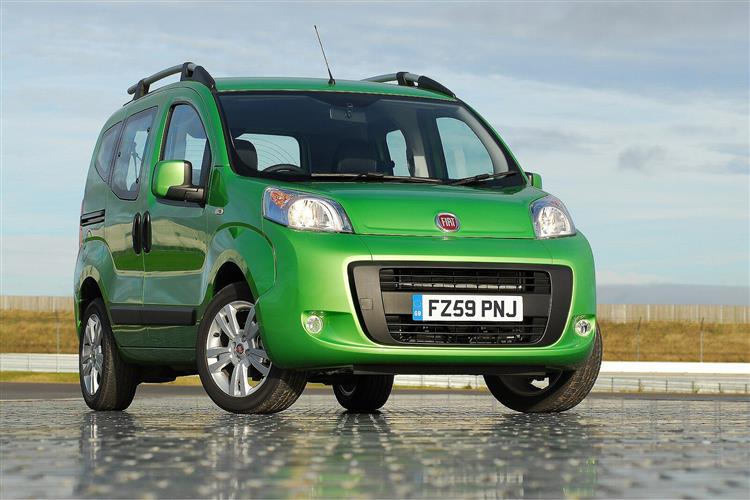