In SsangYong's Tivoli XLV launched in 2016, buyers got the luggage space of an expensive family-sized compact Crossover for the price of a much smaller model in this segment. Plus there were higher standards of equipment and safety than folk could usually expect for the money being asked. It's a rare but surprisingly strong package.

We all like the idea of super-sized value. Whether it's a milk shake, a supermarket special or, as in this case, a very creditable little Crossover. The model in question is SsangYong's Tivoli, which was the Korean brand's breakthrough contender in the market sector usually dominated by cars like the Nissan Juke and the Renault Captur. In 2016 though, we were told it could be even better because it could be even bigger. It could be like this - the Tivoli XLV. The letters stand for 'eXciting Lifestyle Vehicle', the 'eXciting' bit from SsangYong's point of view lying in the way that this variant considerably increased the scope of the ordinary Tivoli model range's potential customer reach. The standard version of that car was here stretched by 238mm behind the C-pillars to create this one, an approach we saw previewed by the brand's 'XLV-Air' concept model at the Frankfurt Motor Show in 2015. That design study was a seven-seater, but this production model dispensed with boot-mounted chairs, focusing instead on delivering the largest luggage capacity available in this part of the market. And that's exactly what you get. The kind of small Juke-style Crossover you'd usually get for the kind of money that was asked by SsangYong here would provide only a tiny, supermini-sized boot. In contrast, the trunk in a Tivoli XLV can match - and usually beat - the standard of space you get from a larger, pricier Crossover from the family-segment where back in 2016, models like Nissan's MK2 Qashqai and Skoda's Yeti sat. Even in their most basic entry-level guises, models like these will cost you more on the used market than an XLV and once you get variants equipped to match the standards of a Tivoli, the price difference in SsangYong's favour can become huge. It all sounds quite sensible doesn't it? After all, many customers shopping in the lower reaches of the Crossover class switch their attention from a compact model to something in the family-sized part of this segment just to get a bigger boot - at which point they discover the large price premium that's necessary to make that move. SsangYong don't think you should have to pay it. Are they right? Does this Tivoli XLV make sense? It didn't get much traction on the UK market, launched in diesel front-driven and AWD forms, with the range expanded with a front driven 1.6-litre petrol model a year later. The XLV was phased out in 2019 and not replaced. Let's check it out.

This isn't a bigger version of the standard Tivoli in the way that, say, a Renault Kadjar is a bigger version of a little Renault Captur. There's no wheelbase increase or fundamental floorplan change. Instead, all that happened here was that SsangYong stretched the bodywork of the standard Tivoli model behind the C-pillars by 238mm. It's exactly the same thing that any manufacturer would normally do in creating an estate car from an ordinary family hatch. There's nothing wrong with that of course. On the contrary, it's a rather sensible thing to do on a small Crossover, given that cars of this kind tend to talk about delivering a 'lifestyle' ownership experience, but then don't usually deliver enough boot space to allow buyers to properly live out such a thing. As we'll see, this one does. If you haven't tried a Tivoli before, you'll find that the cabin's a lot nicer than the kind of thing you'd normally come across in a small, affordable Crossover, an impression that's not surprisingly aided enormously by the high-spec trim level that XLV buyers have to have. You probably won't be expecting to find the leather upholstery that comes as standard - the supportive seats are heated too - and, if you'd previously dismissed SsangYong as a 'budget brand', you probably won't be expecting the modern, ergonomic instrument layout either. In the rear, thanks to a low central transmission tunnel and a boxy roof line that frees up plenty of headroom, you could fit three adults in with acceptable comfort if you really needed to for short to medium-length trips. Out back, there's a much bigger boot - the standard Tivoli's 423-litre space grew to 720-litres here. That's a similar capacity to that you'd find in many Qashqai-class family Crossover models, but substantially more than you'd get from the more compact Juke-segment contenders this SsangYong is priced against. 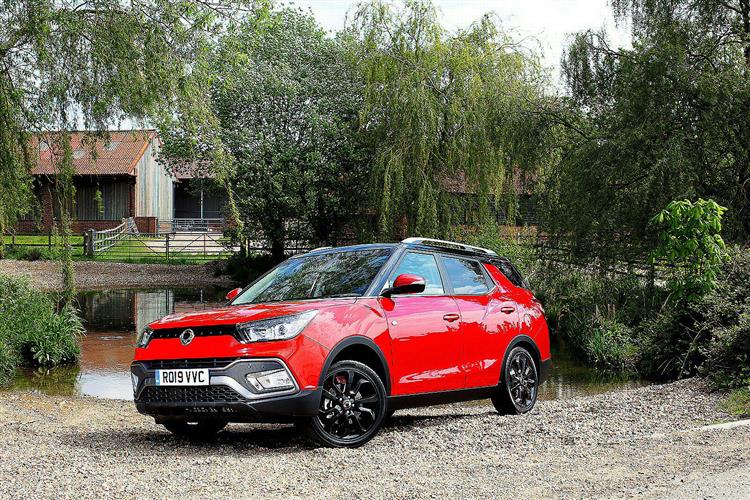