THE FULL MONTY? (some text hidden)

Fiat Professional's Fullback is a light truck that was sold in the UK between 2016 and 2019 that used proven Mitsubishi L200 design and technology to more quickly establish this brand in this growing segment. Whether your need is to transport quadbikes and surfboards or hardcore and shovels, the Italian maker hoped you'll see this as 'the Professional pick-up'. Does it make sense as a used buy? Let's see.

Fiat wants to be a major player when it comes to light commercial vehicles but back in 2016, the brand concluded that it couldn't be without a competitive pick-up model in its LCV line-up. Hence the need for this model, the Fullback. To create this Fullback model, the 'Fiat Professional' commercial vehicle division turned to Mitsubishi, whose L200 Series 5 has always been one of the established class leaders. There wasn't much need to significantly change such a fundamentally strong product, so wisely, Fiat didn't, contenting itself with re-styling the front end and requesting that the Thai factory supply Fullback models with a very complete value-orientated specification. Otherwise, this Fiat shared all the attributes that has always made its Japanese stablemate such a popular choice in this class - things like practical dimensions, off road prowess and on-tarmac manoeuvrability. It was ruggedly built for a tough working life too. There's a one tonne payload and if you add towing capacity to that, there's the potential to shift well over 4 tonnes with this truck. This Fullback model sold until Mitsubishi's production of the MK5 L200 ended in mid-2019, with a high value 'Cross' variant added to the range in 2018. When production finished in 2019, the Fullback wasn't subsequently replaced.

What You Getword count: 409

Sometimes, a different perspective pays dividends. Fiat's designers didn't get much scope to change the look of the fifth generation Mitsubishi L200 this pick-up is based upon, but they were allowed their own take on the front end. The decision to go a bit easier on the bling was a wise one, giving this Fullback model an arguably more sophisticated demeanour. The grille has horizontal bars, rather than the L200's shiny vertical slats and is framed by two strips of satin silver trim. It flows into powerful HID headlights that on top models feature Bi-Xenon projectors. Only the double cab body style was offered. Fiat didn't bother to make any changes in the cabin, so it's just as well that that there wasn't much wrong with the original Mitsubishi layout. In comparison with some other pick-ups, it's actually quite car-like, the inevitable hard-wearing plastic lifted by splashes of silver and piano black trim. The design of the fascia is more like an SUV than an LCV too, with a smart high-mounted 6.1 or 7.1-inch touchscreen on top models that includes Garmin navigation and an incorporated rear view camera display. Taking a seat in the back isn't always a pleasant experience in a Double Cab pick-up where rear seat occupants are often made to feel like second class citizens as they endure painfully upright backrests and restricted legroom. Things are better here though, helped by the fact that the cabin zone of this vehicle is one of the biggest in the class from this period. To give you some perspective on that, there's 1,745mm of total interior length on offer, which makes this model a massive 103mm longer in this regard than a rival Volkswagen Amarok. Quite a difference. What about cargo bay practicality? Some other rivals from this era do offer slightly larger cargo beds, payload capacities and towing capabilities but broadly the Fullback remained competitive in these areas. The tailgate provided isn't lockable (not much point when people could just lift stuff out anyway). Once the panel is retracted, you're faced with a cargo bed 475mm deep, 1520mm in length and 1,470mm in width. This area has a load volume of 1.9m2 and could take a payload of up to 1,045kg - with a 5kgs increase on that figure if you've an auto transmission model. Combine that payload capability with this model's braked towing capacity of up to 3,100kg and you'll be able to lug along nearly 4.1-tonnes. 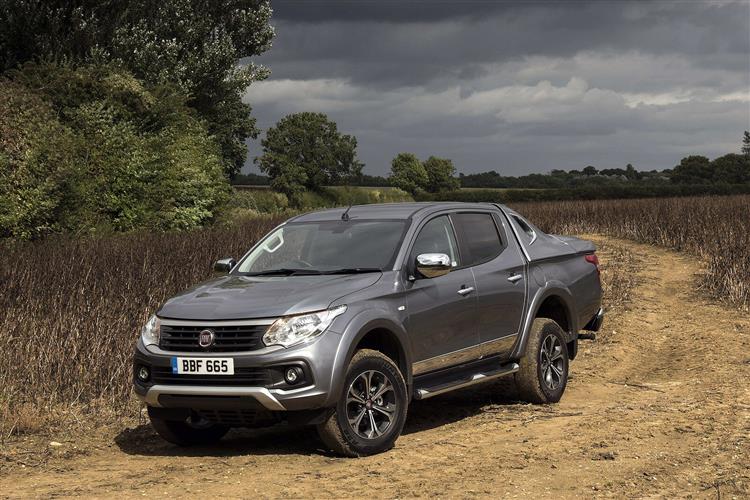