BACK TO THE SEVENTIES (some text hidden)

The Infiniti Q70, launched in 2014, was a rebadged version of the Infiniti M full-sized Executive segment saloon that the Nissan's luxury brand had launched five years earlier. This was a powerful, finely crafted and passionately designed full-Executive class saloon designed to compete directly with tough BMW 5 Series, Audi A6 and Mercedes E-Class sector rivals. When new, it was aimed at segment customers prepared to try something a little different. And it's used appeal is much the same.

BMW, Audi, Mercedes and Jaguar all make very desirable Executive saloons. But what those makers very often don't deliver is a sense of exclusivity. In the 21st century's second decade, Japanese brand Infiniti aimed to offer models that delivered exactly that. Infiniti, you'd be forgiven for not knowing, is the luxury division of Nissan, much as Lexus is the plush part of Toyota. Infiniti's first forays onto the European market were tentative, with Crossover, Coupe and Convertible models that targeted fringe market sectors and came only with petrol engines few buyers wanted. With the M saloon, launched here in 2010, that all changed, the car offering a much more wide-ranging appeal, with hybrids, diesels and both rear-driven and 4WD options. The car was slightly facelifted and renamed the 'Q70' in 2014. This Infiniti M/Q70 design offered a product formula that certainly worked on paper, providing the rear wheel drive handling feel of a 5 Series with the luxury of an E-Class and the technology of an A6. In practice though, customers were less convinced - and there was only a tiny dealer network to convince them. So, almost inevitably, the Q70 failed to make much of an impact and vanished from the market when Infiniti withdrew from the UK at the end of 2019. But does this model make sense as a used buy? That's what we're here to find out.

What You Getword count: 601

Long bonnet, short front overhang, raked back windscreen, short tail. With this Infiniti M / Q70 model, all the usual Infiniti design cues are in place, melting into a shape slightly longer than that of obvious German rivals and said to be inspired by natural wave-like forms. Depending on who you believe, this is simply a development of the Japanese market-only Nissan Fuga of 2004 or a more practical interpretation of the brand's Essence supercoupe concept paraded at Motorshows five years later. Whatever the truth, it's certainly a shape with an up-market if rather Oriental feel, quite sufficient to achieve the golf club cred many owners will be seeking. Premium but unpretentious would be one way of describing it, a phrase also appropriate for the leather-lined interior. A broad centre console bisects the dash and continues on between the seats, creating very distinct zones for both driver and passenger. Both are enveloped by soft leather and gloss wood that Infiniti claimed was similar in finish to that used for centuries across Europe for the manufacture of luxury furniture or high class musical instruments. We can't remember too many Queen Anne chairs or Louis XVI pianos featuring a 'white ash with silver powder' finish - but then we could be wrong. Anyway, it isn't enough to dispel what at the end of the day is a very Asian feel. For us, that's a good thing. Infiniti here went beyond simply trying to copy the Teutonic brands and tried, and in many ways succeeded, in creating a cabin with a more welcoming, less clinical feel. The analogue clock is lovely and everything you touch, every panel, every surface is soft and sensuous. Plush Premium models even have a 'Forest Air' setting in the climate control to waft leafy or wood-scented aromas over you while you drive. Despite a central control system with a high-mounted centre screen to display sat nav, air conditioning and in-car entertainment settings, there are still rather too many switches and buttons but once you master them, it's all pretty intuitive. Better still, few will struggle to find an ideal driving position, though prolonged fiddling with the ten-way adjustable electric seat may be necessary to do so. And in the rear? Well one of the disappointments of graduating from a BMW 3 Series-sized compact executive saloon to a fully-fledged BMW 5 Series-sized Executive sector conveyance is that the extra size and money still doesn't buy you a back seat capable of taking three adults any real distance. So it is here. Unless you're an uncomplaining child, you won't want to be perching on the centre seat for any real length of time. But those either side of you would be very comfortable indeed, enjoying significantly more knee room than they'd get in a 5 Series. A perfect place to enjoy the cosseting ride, engineered specifically so that occupants could write legibly over poor surfaces at speed. Perhaps that's one of the reasons why the boot is a little smaller than obvious rivals, an issue that would to some extent be mitigated if you could fold down the rear seatbacks to extend it. But you can't. Still, lift the 'ducktail'-designed boot lid and you'll find 450-litres available to you in the 2.2 and 3.0-litre diesel volume variants - which will probably be quite sufficient for most buyers. It's a figure that for some reason increases to 500-litres in the 3.7-litre petrol V6 but predictably falls to just 350-litres in the 3.5-litre hybrid version due to the need to accommodate all those batteries. A ski-hatch promises an extra option for longer items. 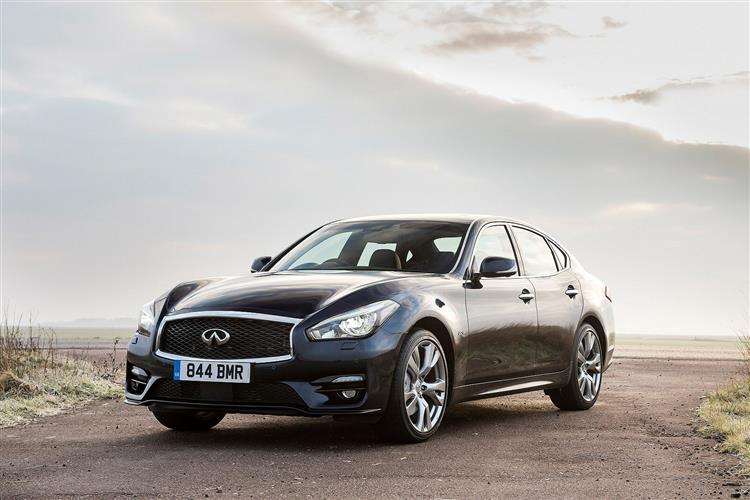