RALLYING TO THE CAUSE (some text hidden)

What's the most exciting car with a roof that you can buy for sensible money? Some would say that you're looking at it right here. The Subaru WRX STi has long been an enthusiast rally replica plaything but it can be a dangerous used purchase unless you consider one of the later versions - and that's exactly what we're looking at here in the form of the fourth generation WRX STi Type UK model saloon that was available here between 2013 and 2020. Here, you get a recipe that'll be familiar to WRX regulars, with a 2.5-litre turbocharged flat-four sending 300PS to each corner. More modern rivals from this era claim more sophistication, but none of the thrills they deliver are quite the same as those you'll get at the wheel of this Subaru.

Nostalgia. There's a place for it - right? Especially when it comes to cars. And when it comes to fast, affordable excitement, there aren't many that spark it as much as the Subaru WRX STi. Later versions of this model weren't called 'Imprezas', but it's with predecessors that were so-badged that this model's origins lie, cars that back in the Nineties dominated the World Rally Championship in the hands of legends like Richard Burns and Colin McRae. Subaru had to make road-going versions in order to compete at this level and found there was a ready market for them from those in search of supercar performance with an affordable price tag. The first Impreza WRX model was launched in 1994 and grey import versions flooded into the UK in growing numbers until the Fuji Heavy Industries brand finally decided to officially import it with here with the launch of the second generation version at the turn of the century. By now though, there was strong competition, primarily from ever-more potent versions of Mitsubishi's Lancer Evo. Subaru had to respond and did so in 2002 with the more serious STi version of this car that enthusiasts have loved ever since. It was powered originally, as in later forms, by a 2.5-litre turbocharged flat four - but a rather different one back then. Only with the third generation STi model of 2007 was power boosted to a more potent 300PS output. In that MK3 version's lifetime, the 'Impreza' badge was dispensed with to distance the car from humbler models and an uprated 330PS power unit was also offered. Subaru eventually decided though, that the fourth generation design didn't need it and finally re-launched the car here in 2013 in 'Type UK' form as a more extreme, more involving and more affordable option to super-hot hatches like Volkswagen Golf R and Audi's S3. This WRX STi Type UK model sold in ever-dwindling numbers until the end of the decade - and wasn't replaced.

What You Getword count: 336

You'd know this was a Subaru WRX at a glance. Certainly almost everything else you expect this car to visually deliver is present and correct. Tick off deep front spoiler, huge gaping bonnet scoop, ground-hugging side skirts and enormous rear wing. It might not be pretty but it definitely has presence, especially when painted in this car's most iconic WR Blue Pearl colour scheme and fitted with the gold wheels so beloved by the STi faithful. Up front, the trademark hexagonal grille was for this Type UK model painted gloss black and flanked by smarter 'hawk eye'-style LED headlamps. Lower placed front fog lights aim to emphasise the car's wide, low stance. It's easier to get in, thanks to wide door openings and low side sills. Once you do, you'll need to manage your expectations, for no attempt was really made here to match the slush-moulded sophistication you'd find in a rival Golf R or Audi S3 from this era. This is a cabin for driving, not one for relaxing in. Owners of the previous generation model will understand that and people of that sort are likely to be very happy with the improvements Subaru was minded to make with this car in its last Type UK guise. You'll love the superbly supportive sculpted 'STi'-embossed front sports seats that, beautifully trimmed in leather and alcantara, position you perfectly in front of the small-diameter flat-bottomed leather-stitched sports steering wheel. Through it, you glimpse a dual-dial display that's bathed in evocative red lighting and headlined by a 3.5-inch LCD screen flanked by white-needled gauges that are finished with smart aluminium rings. And out back? Well there's a larger boot than you might expect, 40-litres bigger than the previous generation model, being 460-litres in size. Plus it's extendable with a split-folding fold-forward rear bench if you find you really can't resist the latest flat pack furniture offer. You will, after all, need a few practical points to help in justifying this car to others who simply won't understand it. 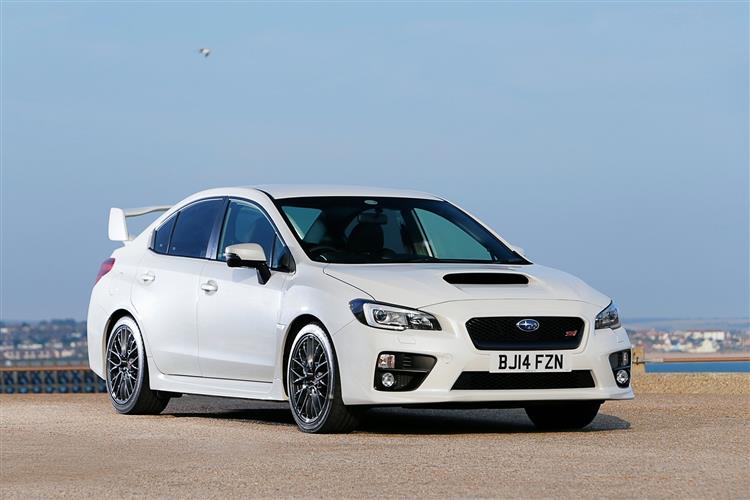