Back in 2016, in the Talento, Fiat at last brought us a credible mid-sized LCV contender, a model that delivered smart looks, plenty of technology and levels of practicality that were difficult to beat in this segment in the 2016-2020 period. These virtues were shared with this model's Renault, Nissan and Vauxhall design stablemates, but you might find a Talento to be slightly more affordable. It all means that if you're thinking of a used van in this sector from this era, this one certainly needs to be on your shortlist.

Fiat's LCV sales have been growing steadily over the last decade thanks to a vast investment in new product which now sees its Professional van line-up offer businesses everything from a 2.8m3 Fiorino van to a 17m3 Ducato. The mid-sized Talento model we're looking at here lies somewhere in the middle of this little lot and claims to offer all the benefits of a very large van with the affordable running costs of quite a small one. As ever with a Fiat LCV, this Talento was a collaborative product; the Turin brand loves a partnership. The company has developed citycars with Ford, superminis with GM and sportscars with Mazda. When it comes to vans though, Fiat's preference has traditionally been to share technology with the French PSA Peugeot Citroen Group - as at the time of this model's launch it still did with its Fiorino and Ducato LCVs. However, when it became necessary to replace the mid-sized Fiat Professional Scudo model in 2016, the Italians chose instead to switch their allegiance to the partnership formed to produce vans that bear Renault, Nissan and Vauxhall badges. That's what's brought us this Talento range. 'Talento' (which references an ancient coin) is a name Fiat has used before - on short wheelbase versions of their largest Ducato LCV back in the Nineties. The badge was revived here to 'evoke value and dependability while also suggesting a broad range of abilities'. Whether that was an accurate description of what's on offer in this case is what we're here to find out, but on paper, the downsized 1.6-litre diesel engines look impressively clean and frugal, the infotainment provision is competitive and, most crucially of all, the load area is larger than Fiat regulars may expect it to be. The previous Scudo model had a maximum cargo volume of 6.0m3, but the biggest version of this Talento can take up to 8.6m3 which, according to Fiat, allowed this van to address 30% more of the mid-sized segment than could be dealt with by its predecessor. All of which is just as well because this model needed to make good on its glossy brochure promises to face down direct medium-sized LCV rivals as talented as Ford's Transit Custom, Volkswagen's Transporter, Mercedes' Vito and the shared design we know as either a Peugeot Expert, a Citroen Dispatch or a Toyota Proace. Arguably an even tougher challenge for Fiat lay in differentiating this product from its near-identical design stablemates, Renault's Traffic, Nissan's NV300 and Vauxhall's Vivaro. It turned out to be the slowest selling in that group and was eventually replaced by a new-era Scudo model in early 2022 which returned to Peugeot/Citroen-derived engineering.

What You Getword count: 309

Fiat tried hard to give this Talento model its own identity. As a result, the overall effect delivers quite a smart and well proportioned front end. Once you're in the cab, the individualistic dash offers a bit more styling flair than you'll find in most other vans in this class and though the fit and finish doesn't really deliver any sort of premium feel, the overall effect is pleasantly fashioned and ergonomically sound. If you ran a previous generation Scudo model, you'll also notice quite a lot of extra space too, this Talento offering an extra 116mm of cabin length for all front seat occupants. Well, almost all. If you happen to have drawn the short straw and find yourself stuck in the middle of the cab in front of the dash-mounted gearstick, your journey will be as comfort-compromised as it always is in vans that offer such an extra middle seat berth. We're not going to criticise that. There's not much the designers can do to make this feature more usable and you might be thankful to have it if, for instance, you need to do things like drop the kids off at school on the way to work. In any case, if you've got yourself a model with the 'mobile office'-style folding front seat, you'll find that most of the time, you won't be using this space for seating anyway. Fold it down and you've got yourself a workable desk surface with a (rather flimsy-feeling) clipboard attachment and ample space for a laptop you can quickly link into the various infotainment technology features on offer via an optional 7-inch colour touchscreen. One feature we particularly need to highlight is the clever 'CargoPlus' load-through hatch, an option that in our view is essential, given the way it enables longer items to be poked through from the cargo bay. 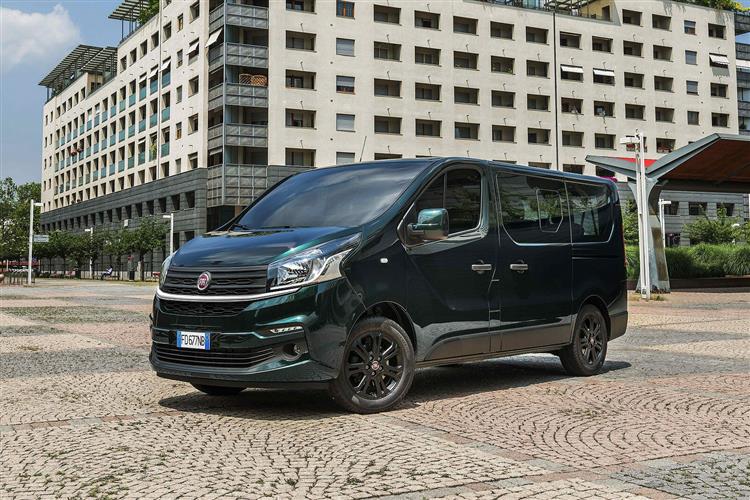