Citroen is looking to boost its share in the LCV market with this improved version of their largest van, the Relay. Jonathan Crouch reports

Sharing a platform with the Peugeot Boxer and Fiat Ducato, Citroen's Relay scores with keen pricing and strong equipment levels. If you thought this sector of the commercial vehicle market began and ended with the Ford Transit, you'll find the Relay offers a wholly convincing alternative, with features you wouldn't expect at this price point. Thanks to a frugal pair of Euro6 BlueHDi diesel engines, it's very efficient too. There's even a choice of full-electric e-Relay variants.

If you're looking for a large panel van, the choices are dizzying. Many manufacturers all clamour for your money, each offering a range of several hundred model permutations that, when broken down, all do much the same thing. How on earth do you make a selection and have any confidence that it's the right one? Or, come to that, even a good one? The good news first. The van market has become so competitive in recent years that the dross has been shaken out. The other factor that's going to make choosing a big van so much easier is that there are basically just four fundamental vehicle families to choose from. You can go for the trusty Transit from Ford, the high-end Volkswagen Crafter/Mercedes Sprinter package, the increasingly popular Renault Master/Nissan NV400 tie-up or the van we take a look at here, the Citroen Relay, also sold as Peugeot Boxer, the Vauxhall Movano and the Fiat Ducato. The Relay's been with us since 2007 but the latest model with its BlueHDi engine and EV technology looks best set to crack some decent numbers in the UK sales charts.

The Relay goes to battle armed with two BlueHDi powerplants. Buyers get to choose from 120 or 140 units - both mated to a six-speed, all-synchromesh manual gearbox. Both the engines are of 2.0-litre capacity and have been optimised for class-leading fuel economy. There's also the option of a full-electric e-Relay version, offered with a 75kWh battery pack, the latter offering up to 154 miles of driving range. Citroen has also listened to feedback from existing Relay users who expressed a concern that road noise in the cabin was higher than the class benchmark and this Relay features redesigned shock absorber mountings to reduce the amount of suspension bump and thump entering the cabin. The brakes have been beefed up as well, with dimensional and tolerance changes to make them more effective. They're quieter in operation as well. Around town, this van can make light work of tricky urban situations, even with the big 'L3H2' variant, which offers a relatively tight 14.14m turning circle between kerbs. The slick six-speed manual gearchange helps here too, which is just as well as there's no automatic option. 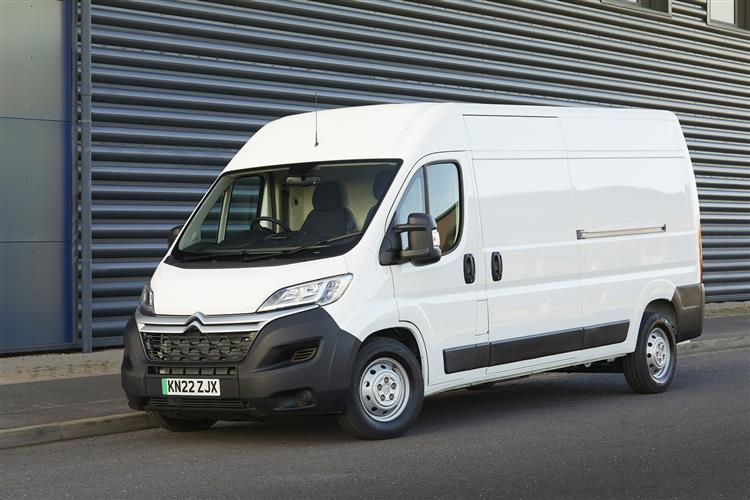