Ssangyong's Korando has previously been something of a fringe player in the value reaches of the mid-sized SUV class, but this MK4 model now aims to edge into the mainstream with the option of full-electric power. It's very affordable, well equipped, rather smart and in combustion form can tow up to 2.0-tonnes. Sounds promising.

Buying a mid-sized family-shaped SUV can be an expensive business these days. The ones you can have for anywhere near £25,000 tend to offer weedy performance and a relatively cramped interior. It's far more typical to be paying getting on for £30,000 for a 'Qashqai'-class family hatchback-based Crossover of this kind and many plusher models sit in the £30,000-£35,000 bracket. So what are we to make of this fourth generation Ssangyong Korando? Prices are pitched from a genuine £20,000, with a really nice one pitched at under £27,000. Pluss there's a full-electric version from under £31,000. This model's also better equipped than most comparable rivals and in fossil fuel form can tow heavier loads. But all of this you'd maybe expect from a Ssangyong. Can this one though, offer a properly class-competitive proposition when it comes to things like fit and finish, drive dynamics, efficiency and safety? Let's find out.

Three powertrains are now available to prospective Korando customers, but these days, all of them only drive the front wheels. The petrol choice is a 1.5-litre GDI-turbo unit with 163PS and 280Nm of torque. It's usually mated to 6-speed manual transmission but of uyou avoid base trim, it can alternatively be had with an auto gearbox. The other main choice (and the one that this car's core caravan-trailing and towing market will want) is the 1.6-litre diesel, which has to be had with an auto gearbox. Here, you get 136PS, but far more pulling power - 342Nm of it; enough to allow the car to pull up to 2.0-tonnes. If your Korando has the 6-speed automatic transmission, it'll also come with selectable 'Normal', 'Sport' and 'Winter' drive modes. This fourth generation Korando has a firm ride that can sometimes get slightly unsettled by low speed bumps on poorer surfaces, but that's because SsangYong has intentionally chosen a slightly firmer set-up to reduce body roll through the bends. That's paid off. Aided by its relatively stiff chassis, this car flows from corner to corner with surprising poise, aiding the smoothness of cross country journeys. The alternative to the fossil fuel variants is the Korando e-Motion full-electric model. This uses a 61.5kWh battery (only 55.3kWh of that capacity usable) offering an unremarkable WLTP range of 211 miles. A 188bhp drive motor powers the front axle and the 62mph sprint occupies around 9 seconds en route to 97mph. 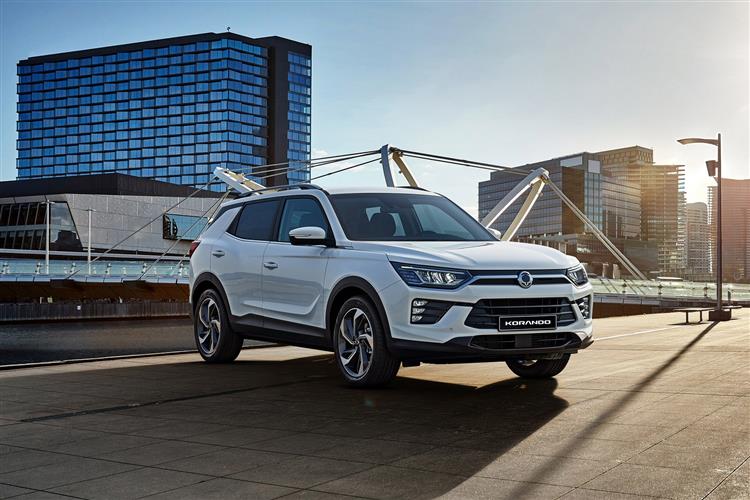