The Jeep Wrangler is one of the most iconic serious SUVs on the planet and has never been a car to shy away from even the toughest off-road conditions. The current model is this fourth generation 'JL'-series version, which takes a completely fresh approach beneath the bonnet, introduces modern safety standards and features a redesigned interior. There's even a PHEV derivative. It's still very much a Wrangler though.

A bit of history first. Shortly after the surface of the earth cooled, vertebrates appeared, developed into dinosaurs and then died for reasons still not fully understood. Shortly thereafter, the Willys Jeep was built and spawned countless generations of Wrangler models, first driven by cigar-chomping beefcakes in aviator sunglasses who hadn't realised World War II had ended. Unfortunately, the brand image suffered a terrible knock in the mid Eighties when boy band Bros chose the Wrangler as their vehicle of choice. Bear with me, we're nearly there. Realising that the Wrangler just didn't cut it in an increasingly sophisticated world, Jeep subjected it to major surgery, creating the 'TJ' series model in 1997. This sold until the launch of the 'JK' series design in 2006, which was replaced by the current 'JL'-series fourth generation model in 2018. With the 'JL', the challenge for Jeep was to modernise the vehicle without alienating the hardcore fans of the marque. The first step was to make sure it rode a whole lot better than its predecessor (which wasn't too difficult). Since then, the brand has concentrated on gradually enhancing powertrain refinement and efficiency. Having done so, the company has tweaked the exterior looks, creating the MK4 model we're going to look at here, revised for the 2021 model year.

Just about the only way we can describe the ride of pre-2007-era Wrangler models to the uninitiated is to imagine being stricken with a rather severe case of haemorrhoids and then being superglued to a spacehopper. Perhaps that's a tad harsh but after the novelty of an old Wrangler's bouncy ride had worn off, you were left with a vehicle that could crawl through deep mud but which wasn't much good at anything else. With the current 'JK' series car, things certainly improved - if not dramatically then, at least, unequivocally. This design is much quieter than its predecessors too, thanks to beefed up insulation from engine and road noise. There's only one conventional engine on offer these days, a 2.0-litre turbo petrol unit with 272hp and 400Nm of torque, mated to 8-speed auto transmission. You can though, talk to your dealer about a PHEV version, the Wrangler 4xe, which mates the 2.0-litre petrol engine to a motor generator unit and a 400V 17kWh battery pack which when charged, can offer up to 30 miles of electrified driving. These days, the Wrangler offers two active, on-demand full time 4WD systems - known as 'Command-Trac' and 'Rock-Trac'. These use next-generation Dana axles, Tru-Lock electric front and rear-axle lockers, a Trac-Lok limited-slip differential and an electronic front sway-bar disconnect system. Whichever engine you go for, the Wrangler is still brilliant off road, with its super aggressive approach and departure angles. For this revised model, Jeep has added Selec-Speed control, an off-road cruise control that allows the driver to maintain a steady speed during rock crawling and other types of low speed manoeuvring. Plus a selectable tyre fill alert can now be set through the 8.4-inch touchscreen. Ideal for off-road adventurers who deflate the tyre pressures to get grip on off road courses when traversing mud and rocks. The plush Rubicon model gets even more specialist front and rear locking differentials, plus a new 'Off-Road+' (OR+) mode that provides unique powertrain and chassis tuning. Specifically tailored for high range 'sand' performance and low range 'rock' activity, OR+ adjusts the ABS, ESC, accelerator pedal, traction control and transmission calibrations . Sand mode is enabled when OR+ is activated while in 4H gear and rock mode is enabled when OR+ is activated while in 4Low. What about tarmac capability? Well on road manners feel safe and predictable, if a little slow-witted, but there are decent levels of grip and, on broken or rutted surfaces, the handling is no longer stymied by a bouncy ride. 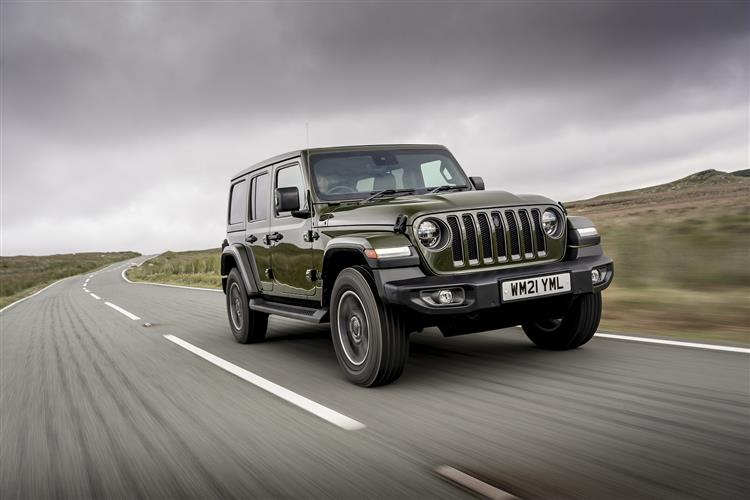