The Jaguar XF Sportbrake is an executive-segment estate that looks to offer a refreshing alternative to the usual choices in this segment, station wagon versions of the BMW 5 Series, the Mercedes E-Class and the Audi A6. In this improved form, diesel variants have become mildly electrified, there are sharper looks and the cabin's had a decent upgrade. In addition, as before, this Sportbrake variant offers a 1,700-litre load space and can tow up to two tonnes, plus there's the option of AWD.

You don't associate Jaguar with estate cars. Which if you think about it is a little strange. The British have, after all, always liked them, whether as family load luggers or as stately 'shooting brake'-type designs. Even so, throughout its history, the Coventry brand has stuck to roots that lie in the production of saloons and sportscars. True, we did finally see an estate version of the compact X-Type in 2004, but even that was half-heartedly based on a Ford Mondeo and quickly forgotten when that smallest Jaguar model was quietly deleted from the range in 2010. Would this famous marque ever develop a proper estate model on its own purpose-built platform? That question was finally answered late in 2012 with the launch of this car, the XF Sportbrake. That model continued to sell, even after the launch of the second generation XF saloon in 2015. Three years on, this second generation Sportbrake model was introduced, a car that was lightly upgraded in the Autumn of 2020 to create the model we'tre going to look at here. What's it like?

As you'd expect, mechanically, the Sportbrake offers up much the same recipe as you'd find in its saloon counterpart, though in this case, there's the addition of self-levelling rear suspension to ensure an effortless ride, even when towing loads that can be as heavy as 2,000kg. The XF range hinges around a 2.0-litre diesel four-cylinder engine and while that doesn't sound too exciting, it's where the big sales are. It now comes in a single 204PS D200 state of tune, offers customers the option of rear wheel drive or AWD and features the brand's latest MHEV mild hybrid engine tech, which can assist the engine under acceleration. As a result, a rear-driven model gets to 60mph in 7.3s - or 7.5s in AWD form. The conventional petrol options continue much as before, 250 or 300PS versions of Jaguar's usual 2.0-litre Ingenium unit in the P250 (RWD) and P300 (AWD) variants. Both feature the engine technologies including a twin scroll turbocharger and Continuous Variable Valve Lift (CVVL), for a strong combination of refined performance and efficiency. The P250 makes 60mph in 6.7s, which the P300 AWD variant mamnages the same sprint in 5.9s. All engines are paired with Jaguar's eight-speed automatic gearbox, which can be controlled using the steering wheel shift paddles for added driver engagement. Across the XF range, driving dynamics suit a relaxed but purposeful style. The chassis delivers near perfect 50:50 weight distribution and huge strides have been made to perfect refinement. Ride is another class-leading XF quality. This Jaguar shares its suspension set-up with the smaller XE model, which means struts with double wishbones at the front and an 'integral link' independent set-up at the rear. The steering uses the same electric power-assisted set-up as the Jaguar F-Type and XE, while active dampers are on the options list. 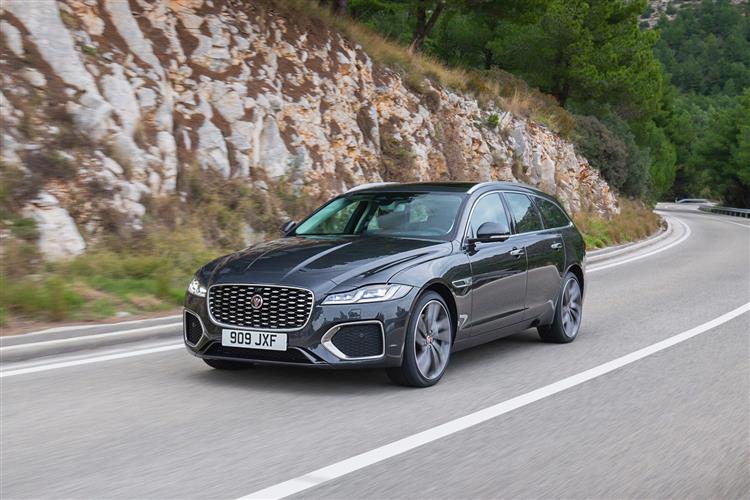