Can any car be deemed a supercar if you can use it every day? Jonathan Crouch ponders the devastatingly rapid yet wholly untemperamental Porsche 911 Turbo S.

Porsche's 911 Turbo can humble virtually any stratospherically-priced supercar you care to name to terms of real world usable performance. It was always fast but in this 8th generation '992'-series version, that speed is more accessible. So it's not only one of the most technologically advanced cars ever built, it's also one of the most exhilarating. In short, another engineering master-class from Porsche.

Give Porsche £155,000 or thereabouts and it will hand over the keys to one of the fastest and most capable cars in the world. It's called the 911 Turbo S. Now that's a lot of money to the vast majority of motorists, but when we're talking about cars that can hurl themselves from a standing start to 62mph in under three seconds and return well over 200mph, it's actually quite reasonable. Frighteningly for its rivals, in the much improved '992'-series guise we're testing here, it's lighter, sharper, rides better and manages to be even faster. It's available with either 580PS - or a jaw-dropping 650PS in the faster Turbo S form we're trying here. A handful of stratospherically-priced supercars are apparently faster on paper, but none out-sprint or out-handle this one in the real world. We're about to find out why.

The gains here, at first glance anyway, are relatively marginal; a bit of extra track width, a little more downforce, revised steering calibration; you might think that these small improvements could collectively be cancelled out by the 12% increase in power. There is after all, enough of it to make this, in real-world terms, the fastest car in the world. Yes, a few exotic lightweight uber-supercars shade it on paper but in reality, at speed over twisting roads, the reality is that nothing you can buy is faster - take it from us. We'd like to see anything else beat it on a track too. The engine, a horizontally-opposed 3.7-litre version of the standard Carrera's 3.0-litre flat six with larger VTG twin turbos, develops a boomier, more intense soundtrack (especially with the optional sports exhaust fitted) and simply hurls this car towards the horizon. On to the figures, which assume that you'll specify the optional 'Sport Chrono' package (as virtually all buyers do). Flick the drive mode from 'Sport' into 'Sport Plus' and in the 580PS form used in the standard Turbo, 62mph from rest occupies 2.8s en route to 199mph - if you're quick with the paddleshifters for the new 8-speed PDK twin clutch auto gearbox. It's hard to imagine how that could be insufficient, but should it be, in this 650PS Turbo S, the stats are massaged out to 2.7s and 205mph. Think only a fractional difference if you choose the Cabriolet body style rather than the Coupe. All very nice, but as we've already suggested, lack of power was never a problem for this car in the first place. Tactile driver involvement was always the issue. Purists will always tell you that less is more in that respect. But perhaps a few purists need to drive this car if that's what they really think. Let's look at how this car has evolved. There's Porsche's latest all-wheel drive system which constantly varies torque between front and rear axles. Plus active suspension dynamic chassis control and rear-axle steering, which subtly turns the rear wheels as you corner. And you get a completely new 'PAA' 'Porsche Active Aerodynamic' package, with active aero flaps and an active rear wing, which is lighter and larger than before. 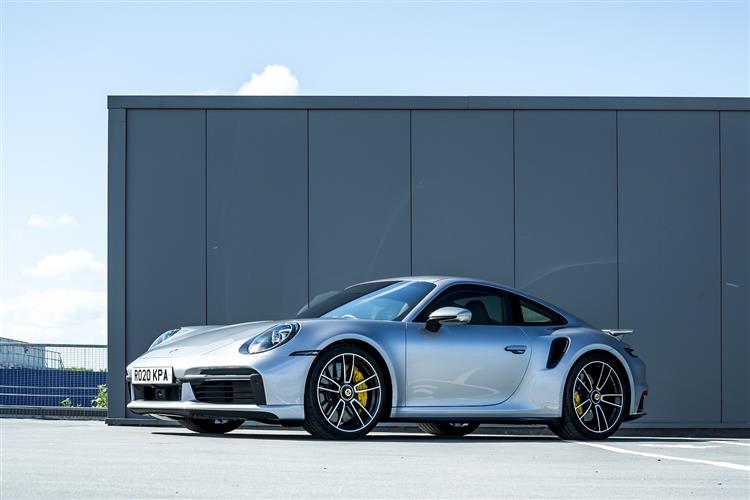